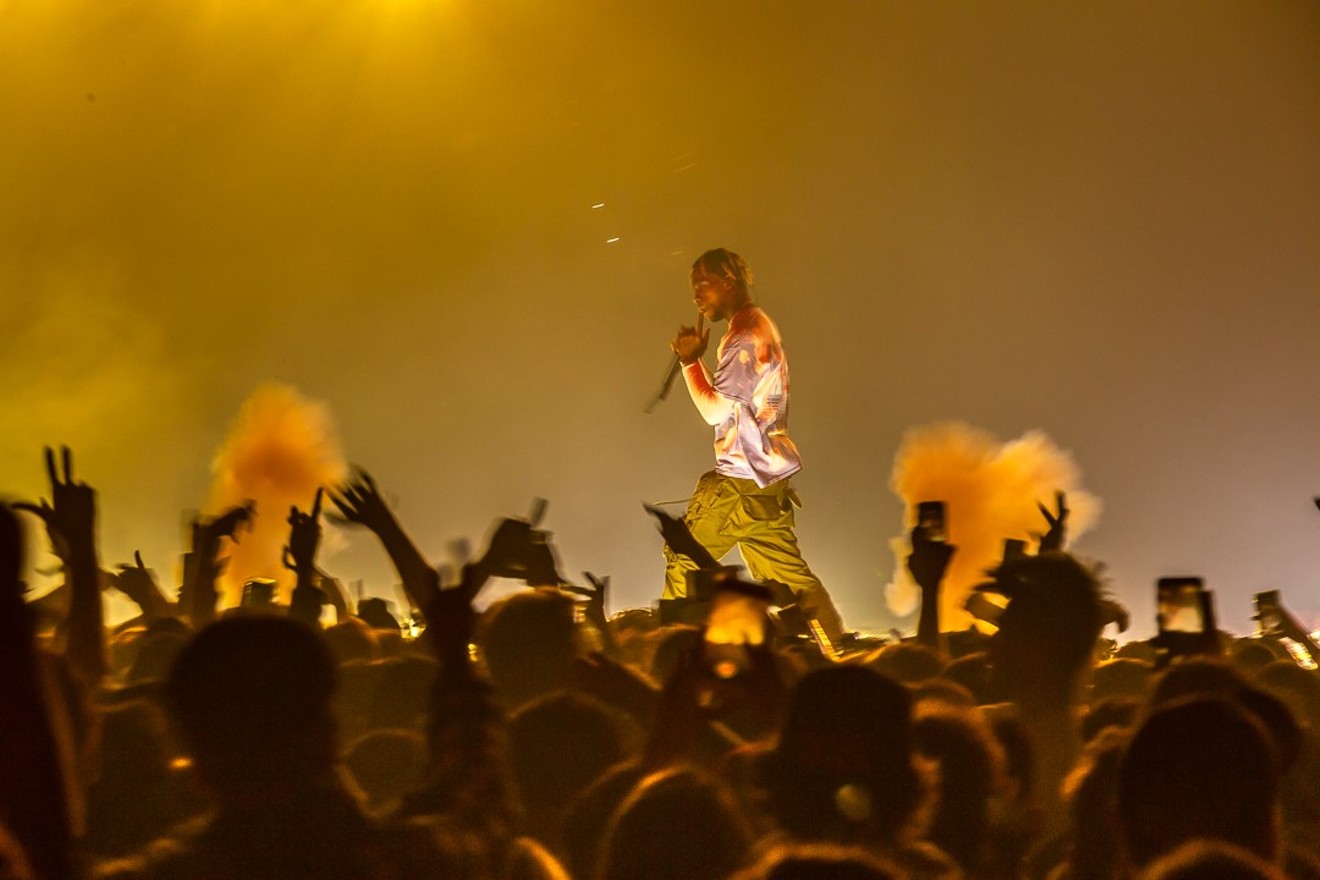 Travis Scott never stopped moving. Brandon Johnson
The teens that crammed into the Pepsi Center Wednesday night for the Travis Scott Astroworld Tour became an electric organism pulsing in unison the moment Sheck Wes walked on stage. Mosh pits broke out. Bodies pressed against each other. Necks craned for a better look at the rapper.

The kids near me didn't seem drunk or stoned; they just embodied the promise of eternal youth Wes was selling, the joy of drowning in the moment. If his cranked-up set was all the crowd got Wednesday night, it would have been worth the price (even if a look at his lyrics raises the question: How many times can someone say “Live Sheck Wes, bitch, I'm dying Sheck Wes” before everybody's yawning? The apparent answer: Infinity cannot be quantified, and the legions bouncing and singing along proved it).

Pity Gunna was the adequate second opener. Accompanied by projections of half-naked women's torsos, his performance wreaked of misogyny, his words failed to draw people in, and his beats were generic. The turned-up crowd turned down, until, in the middle of his set, he asked people to break out their phone lights, creating a dazzling effect. That's a move typically reserved for headliners late in their set looking to manufacture some authenticity and intimacy in an otherwise impersonal venue. Lucky for him, the sparkling galaxy of phones gassed up the crowd, even if a few impatient voices cried out, “Travis, Travis," ready for Gunna to be a goner.

The mumble-rapper Trippie Redd was slated to follow Gunna, but Redd backed out of the Astroworld tour last week. He was allegedly frustrated that the crew’s setup time was cutting into his set — at least, that’s what TMZ reported when it broke the story.

That rings hollow after seeing Wes convert Scott’s fans into his own in just a few minutes. And the setup for Scott’s performance wasn't unreasonably slow. Either the crew has sped up in recent days, or Redd’s excuse was bunk.

In between openers, a few fights broke out on the floor. One guy was piled on and then dragged away by security guards to the delight of the crowd: “Na-na-na-na, na-na-na-na, hey, hey, goodbye,” the teens chanted. After that guy was taken away, security guards splashed Scott’s fans with bottled water, and they took the soaking with delight. People just seemed happy to be there. 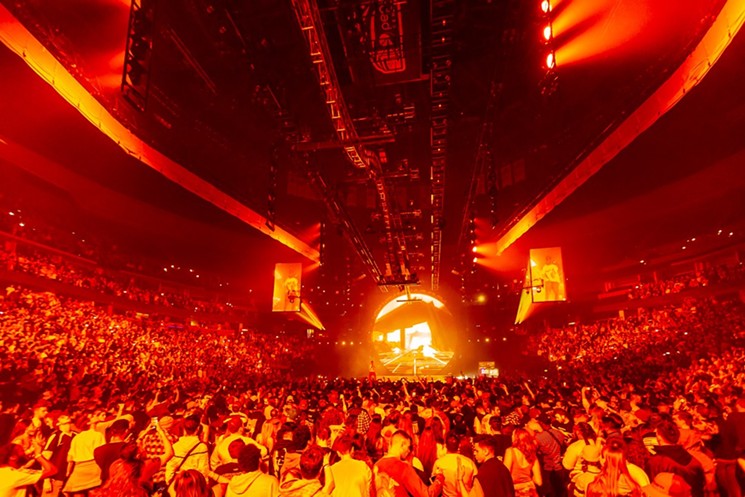 The Pepsi Center was packed for Travis Scott's Astroworld tour.
Brandon Johnson
Then the music swelled, the lights went down and a video played on a circular screen as bass rumbled so furiously it shook my hair, pants and nostrils. All eyes were turned toward the main stage, when an explosion on a second stage in the middle of the crowd erupted and fans turned to see Scott standing beneath a Ferris-wheel-like ride.

He jumped right in, landing one hit after another. Decked out in a baggy long-sleeved T-shirt, pants and a beanie that he eventually lost to the crowd (perhaps the only aspect of his production that wasn’t bedazzled in excess), he leaped around with heart-pounding intensity.

Even when Scott, foiled by the altitude, had to step to the side where a crew member offered him puffs of oxygen from a portable tank, the Mile High City's elevation didn't break him. He had the energy of a caffeine-addled roller derby team bulldozing a squad of flipping gymnasts.

In short: Scott delivered — and he had to if he was going to compete with the spectacle he brought to town.

His crew had built him an amusement park in the arena. It included one ride akin to Elitch Gardens’ Brain Drain — but built for one person and much, much slower — that took Scott upside down as he performed. Another, a long lighting rig that spewed flames earlier in the show, descended midway, and Scott stood tethered to a smoke-spewing chariot that he rode like a roller coaster up and down the rig, above the crowd. All the while, a gargantuan inflatable astronaut, nearly as tall as the Pepsi Center, stood behind him.

On top of the carnival rides, there were all the typical flourishes of an arena show: blasts of smoke, animation, flames everywhere.

Smoke consumed the Astroworld tour.
Brandon Johnson
While Scott traveled from one stage to another, fans stampeded to get close. He insisted they give each other some room, and they did, sort of, until they didn't.

The battle-ram bass, cranked so loud that the rest of his beats and voice were suffocated, never stopped threatening tinnitus for all. That throbbing noise, strobes and flames created a psychedelic experience that echoed on hours after the show.

AutoTune, which once helped singers find a perfect pitch, has long been used in hip-hop. But Scott's no T-Pain noodling with a gimmick. The way he modulates his voice suggests that humanity is ending and the age of the conscious machine has arrived — which is apparently a reason to bounce. He creates an art of Afrofuturist cyborgs fueled by psychedelia that just might save the world from brutal cops and burning cities — or at least give high-schoolers a break from the mundane.

The last song Scott performed, “Sicko Mode,” is the first of his to take him to the top of the Billboard charts. It earned him Grammy nominations this year, and the crowd knew every word.

But all that bingeing on spectacle could only go in one direction: purging, and cartoon images of children spewing green vomit took over the screens. "Sicko Mode," indeed.
KEEP WESTWORD FREE... Since we started Westword, it has been defined as the free, independent voice of Denver, and we'd like to keep it that way. With local media under siege, it's more important than ever for us to rally support behind funding our local journalism. You can help by participating in our "I Support" program, allowing us to keep offering readers access to our incisive coverage of local news, food and culture with no paywalls.
Make a one-time donation today for as little as $1.