Westword
The Best of Denver is not for beginners. Today our 34th annual celebration of the city will hit the streets (and westword.com). Over the years we’ve honored tens of thousands of people, places, institutions and amenities; while some of the award categories from decades past are now obsolete — mobile hot tubs got in hot water with the health department long ago, for example — others remain as relevant today as they were when we published the first Best of Denver in 1984. Many of these honorees are very familiar to anyone who’s been in Denver for any length of time; they're integral to life in the Mile High City.

But this city also holds people who have yet to experience their first paralyzing spring snowstorm; Denver added over a thousand residents a month last year, new Denverites who have yet to discover the best things about this city.

Newcomers themselves are not a new phenomenom. Since 1858, when gold was discovered in the creek by what would soon become Denver, this area has always attracted pioneers...some seeking their fortunes, some simply looking for a better place to live. More often than not, they found it here, staying to make the city an even better place to live. Though the rancor between natives and newcomers has gotten particularly loud lately, transplants have always created some tension here — certainly for the first residents of the area, the Native Americans who camped by that creek, and lately, for the tenants who see their rents rising drastically and the homeowners who find themselves fighting for parking spots in front of their houses. The natives of Denver and the particularly protective people who consider themselves almost-natives after living here for ten years, or maybe just two, are losing patience with all the recent transplants who take this city’s great people, places, institutions and amenities for granted.

Because the Best of Denver is not for beginners, we assume our readers will come to each annual edition with a knowledge of what’s come before, will have gone out to eat the best burger, try the best dance club, use the best ski deal. Rather than repeat all that information from previous editions (you can read past Best of Denver winners here), the 2017 Best of Denver is packed with recent discoveries. That doesn’t mean we don’t still celebrate those past honorees; we simply want to share fresh reasons why we’re so high on the Mile High City. That’s why it’s important that beginners absorb and understand the basics before they move on to the double-diamond runs.

Here are three examples of ideas that were already well done in Denver — but will be fresh meat to newcomers. Appropriately enough, they all focus on hamburgers. 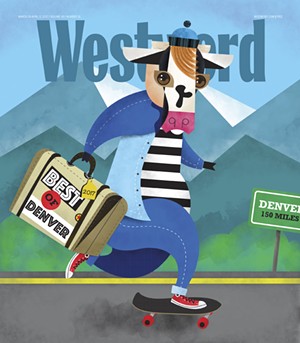 Westword
Philadelphia has its Liberty Bell, San Francisco has the Golden Gate Bridge, but when a city’s backdrop is as naturally majestic as the Rocky Mountains, it doesn’t need many monuments. Still, Denver has been home to many entrepreneurs who want to make this city, this state, a better, tastier place, and they’ve left their mark in physical ways. New to Denver? Head to 2776 Speer Boulevard and pay your respects to Louis Ballast, whose claim to have invented the cheeseburger at his Humpty Dumpty Barrel Drive-In in 1935 is commemorated by a marker that stands in front of what’s now a Key Bank branch.

For another Denver first, turn north to the Chubby Burger Drive-Inn, at 1231 West 38th Avenue. Last year the original Chubby’s building was knocked down and replaced by a new spot where you can actually sit to eat your order, but the green chile is still made according to the recipe introduced fifty years ago by Stella Cordova, the waitress who bought Chubby Burger in 1967 and added her own Mexican specialties, creating a legend in the process. The specialty here? The Mexican hamburger, Cordova’s take on another Colorado invention (the late Joe’s Buffet on Santa Fe Drive gets the credit for creating the first Mexican hamburger), which smothers a tortilla filled with a beef patty and refried beans in that killer green. According to Gustavo Arellano, author of Taco USA: How Mexican Food Conquered America, the Mexican hamburger at Chubby’s is “the dish that best personifies the Mexican-American experience, a monument to mestizaje.” If you’ve lived in Denver long enough to have a hangover (and if you’re coming from sea level, remember that alcohol hits you harder at this altitude), know that grabbing a Mexican hamburger at Chubby’s on your way home will make the next morning much more palatable.

Not far from Chubby’s is the city’s oldest continually operating bar, located at 2375 15th Street, close by where Denver got its start, at the confluence of Cherry Creek and the South Platte River. By 1873, the saloon was operating as Highland House; it later became known as Whitie’s Restaurant, then the Platte Bar, and in the ’40s turned into Paul’s Place, where Neal Cassady, the inspiration for Jack Kerouac’s On the Road, might still have an outstanding tab, judging from the letter he sent a pal while sequestered in the Colorado State Reformatory: “I frequented the place occasionally & consequently have a small bill run up, I believe I owe them about 3 or 4 dollars. If you happen to be in that vicinity please drop in & pay it, will you?” Somewhere along the line, the building lost its top floor, but the bar kept pouring. In 1970 it passed into the hands of Jim and Angelo Karagas, two brothers out of Detroit (yes, transplants) who had trouble figuring out what to call their place and finally just went with My Brother’s Bar.

Not that you’d know that from the building itself; there’s never been a sign on My Brother's Bar. But if you’ve lived here for any length of time and happen to love a local hangout with a great burger and even better character, you know all about the place. You may even know that it recently changed hands: With developers eyeing this now-prime corner and Jim Karagas way past time for retirement, he did the next best thing to keeping it in his family and sold it to the Newman family. Mom Paula Newman has worked at My Brother’s Bar for more than thirty years; her son, Danny, is an entrepreneur who spent his very formative years hanging out at My Brother’s. The deal saved this Colorado classic for natives and newcomers alike, so that transplants can continue to discover it in the years to come.

Hungry to know more? This city is full of great stories, wonderful people and places to discover. As a primer before you dig into the Best of Denver 2017, we’re offering this quick newcomers’ guide, 100 things you need to know about the Centennial State and, in particular, its capital, before you can truly call the place home.