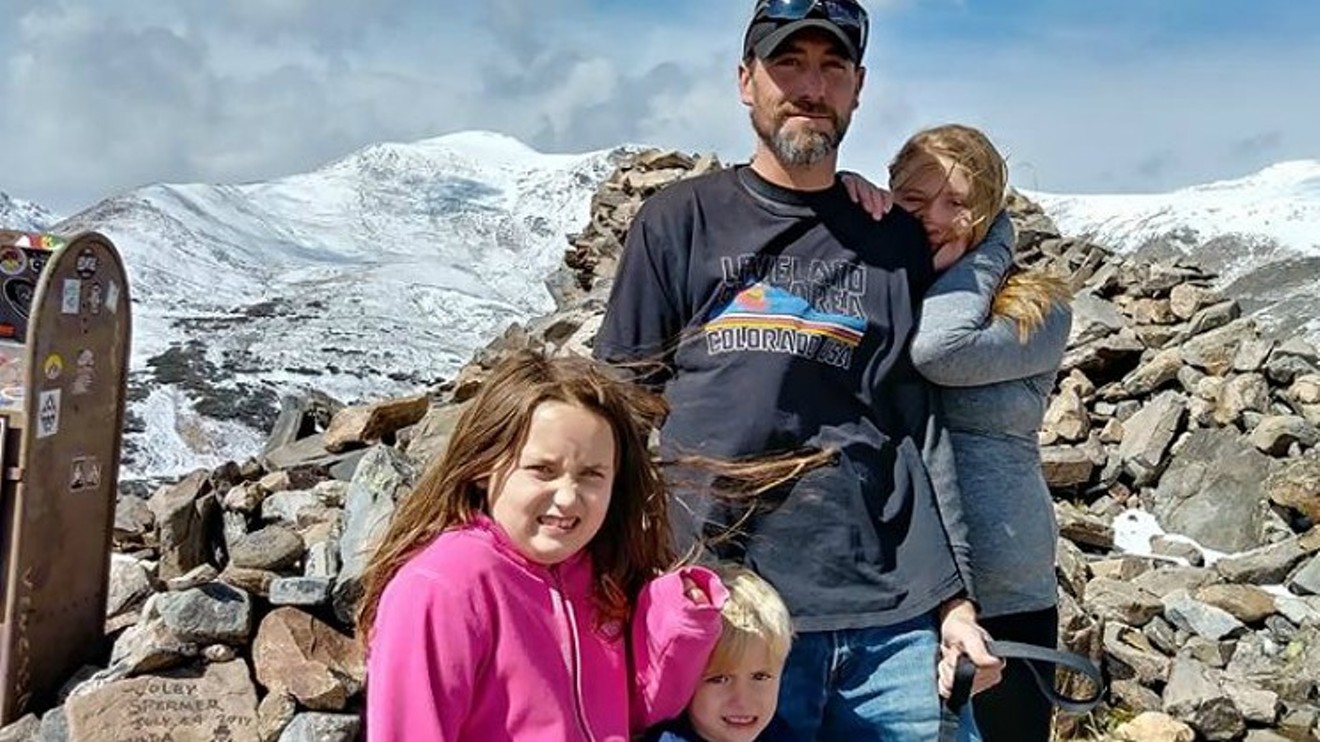 Adam Lee wearing a Loveland T-Shirt while posing with his kids in a photo shared in October 2017. Facebook
In May, the Occupational Safety and Health Administration issued a damning preliminary report about the late-2017 death of forty-year-old Loveland Ski Area employee Adam Lee, who suffered crushing chest injuries while working on the Magic Carpet, a motorized beltway used to teach kids how to ski.

The document essentially characterizes Adam as an innocent victim. But his widow, Erika Lee, says Pinnacol, the company that administers workers' compensation payments in Colorado, is trying to withhold half of the money she should be receiving to support her three kids because Adam's autopsy revealed high levels of THC in his blood.

Of course, marijuana use is legal in Colorado. But the substance remains illicit on the federal level, and this disconnect has led to controversy on multiple fronts. Look no further than the 2015 ruling against Brandon Coats, a paralyzed medical marijuana patient who was fired from his job at DISH Network following a positive drug test despite a current MMJ license and a complete dearth of evidence that he'd ever used cannabis on the job.

There are parallels between the Coats case and the situation involving Adam. "They are claiming he was intoxicated," Erika says, even though postmortem tests aren't able to determine if the THC was active or a remnant of previous use that would have left him entirely sober at the time of his death. She maintains that "no one is making them do this. But they're looking at this as a way to not pay benefits. And the same thing is happening with Adam's life insurance," issued by Sun Life.

While a recent Denver7 piece focused on the marijuana connection, the situation as a whole isn't new. After the OSHA report was made public, Erika told us that Loveland "is still fighting me. It was four months before we got any money at all, and I still have only one-third of the workman's compensation — and they've been trying to take away more of it away for safety rules Adam supposedly violated. But the report shows Loveland was 100 percent involved."

In response, Loveland marketing director John Sellers offered the following statement: "Loveland Ski Area is examining and assessing the findings received from OSHA. Upon completion of our assessment of the findings, we will timely and appropriately respond to OSHA."

The Magic Carpet at Loveland Ski Area after the accident.
Colorado Passenger Tramway Safety Board
He added: "We continue to mourn the death of Adam Lee and extend our thoughts to his widow, children, family and friends."

The first major study of what happened to Adam was released by the Colorado Passenger Tramway Safety Board in mid-January, but it raised as many questions as it answered. Its authors revealed that there was nothing mechanically wrong with the lift, even though Adam spent more than an hour beneath it. The Magic Carpet only stopped after its mechanism was jammed by his body.

According to the CPTSB report, the Magic Carpet was fired up for the first time on December 28, 2017, at around 9 a.m., and its operator "observed no indication of mechanical or electrical problems with the conveyor."

Adam is said to have "smiled and waved to the operator as he opened the hatch cover of the conveyor and accessed the crawl space" under it.

The report stressed that "the conveyor was in operation at this time and continued to operate normally to the skiing public" — a statement that was quizzical on two levels.

For one thing, the Magic Carpet's operator hadn't called for lift maintenance. But neither did he shut off the beltway as Adam climbed under it even though "industry standards prohibit the performance of maintenance beneath a conveyor while the conveyor is in operation."

At 11:22 a.m., the Magic Carpet automatically stopped. The initial indication was "an overspeed fault," the document maintains.

The beltway's operator responded by notifying lift maintenance of the problem, and a repair worker arrived within minutes.

The report didn't say whether or not the employee was informed about Adam having climbed beneath the lift around an hour earlier. Instead, it simply pointed out that the staffer attempted to "clear the overspeed fault and restart the conveyor belt," but "each restart immediately indicated a speed reference fault and the belt did not move."

The repair worker suspected "an ice buildup on the drive or return roller that was jamming the roller and prohibiting belt movement," the document continued — so he accessed the top terminal crawl space and began looking under the conveyor. 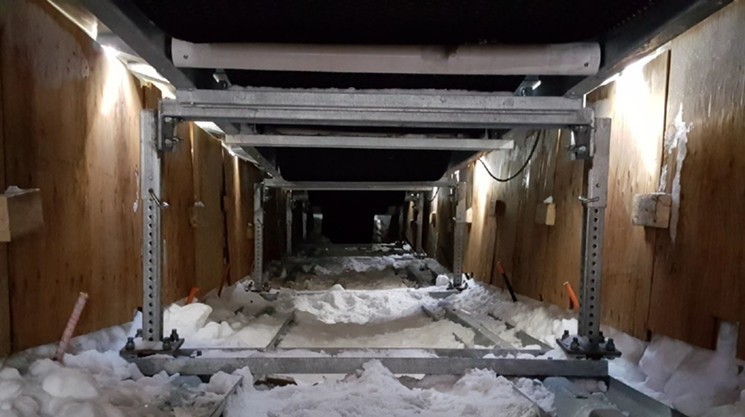 The maintenance tunnel beneath the Magic Carpet.
Colorado Passenger Tramway Safety Board
Doing so wasn't as simple as climbing into the aforementioned tunnel. Four bolts had to be removed from the lower terminal hatch in order to take out the panel above the tension roller.

That's when the employee "discovered the entanglement" caused by Adam's body.

The maintenance worker quickly cut the conveyor belt and pulled the tension roller in order to extract Adam, who was rushed to a nearby medical center, where he was pronounced dead. And as Erika interprets the OSHA report, all those restarts resulted in tragedy.

"They started the Magic Carpet on him seven times," she says. "They told him to go down there, and his backpack was there, his tools were there. They knew he was down there, but they ran it seven more times. And if they hadn't, he'd still be alive today."

Afterward, Erika accused Loveland representatives of trying to blame Adam for his own death, even floating the theory that he was suicidal at one point. But the OSHA report's authors made it clear that Loveland, as represented by its owner, Clear Creek Skiing Corporation, erred when it came to enforcing safety measures. The report notes fifteen total items of concern: thirteen marked "serious," two designated as "other-than-serious."

The first citation maintains that Clear Creek didn't properly evaluate the space under the Magic Carpet "to determine if this work space included any recognized serious safety or health hazards that would classify the tunnel as a permit-required confined space. This condition exposed employees to the hazard of getting caught in the rollers and moving parts." Other complaints involve a failure to forbid employees from going into the crawl space beneath the Magic Carpet when it was running and an absence of procedures that would have prevented the device from being switched on when someone was down there. 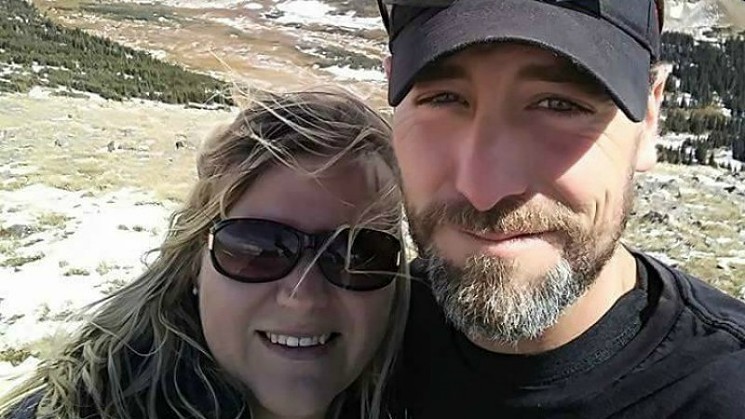 Adam and Erika Lee.
Facebook
Nonetheless, Erika is yet to receive all the workman's compensation payments she believes she's due. "I'm supposed to get two-thirds of them," she notes. "The first third was taken away because of social security, because they say I would be double-dipping. But you're supposed to be able to live on the other two-thirds — and they're taking away 50 percent of the benefits because of the THC in his system."

In Erika's view, the OSHA analysis proves that "this was Loveland's fault, which is what makes what's happening so devastating. They're not taking any responsibility for it. They sent him under there, and it had nothing to do with anything he had in his system."

According to her, "There's no rule that says Pinnacol can't pay everything. They're choosing not to pay it. They could say, 'This is a widow with three kids. Her husband was killed at work and she needs help.' And it's going to be really hard to survive without the benefits I'm supposed to get."

After Adam's death, Erika moved back to Michigan, where the family had been living prior to their arrival in Colorado. But she reveals that the clan is returning to the state soon so she can take a job as a kindergarten teacher in Georgetown. Her kids are thrilled, since they've missed their Colorado friends and the support they received from members of Adam's family who live here. But her salary is modest, and she'll need every dime to keep a roof over everyone's head.

Right now, a hearing before an administrative law judge is slated for August 30, and Erika is prepared to make her argument because "it's the right thing to do. If I thought Adam caused what happened or that it was his fault, I wouldn't be fighting it. And the laws don't match, which is going to make it even harder to win. But I'm a widow with three kids, and they need to be provided for."

She emphasizes that "no amount of money will bring Adam back. But when you're at fault for something, when you take away someone's life, you need to take responsibility."

Click to read the May 2018 OSHA report about Adam Lee's fatal accident.
KEEP WESTWORD FREE... Since we started Westword, it has been defined as the free, independent voice of Denver, and we'd like to keep it that way. With local media under siege, it's more important than ever for us to rally support behind funding our local journalism. You can help by participating in our "I Support" program, allowing us to keep offering readers access to our incisive coverage of local news, food and culture with no paywalls.
Make a one-time donation today for as little as $1.