The victim was waiting for a train home when he was accosted by security guards. Kenzie Bruce
Two private security guards involved in beating up an RTD customer inside a bathroom at Union Station during the early-morning hours of April 20 this year have pleaded guilty in criminal proceedings. At an arraignment hearing at the Lindsey Flanigan Courthouse on Friday, December 7, 34-year-old James Hunter accepted a plea deal from the Denver District Attorney’s Office in which charges of first-degree assault and intimidating a witness were dropped in return for his pleading guilty to Class 5 felony menacing — threatening a victim with a weapon. A second security guard, 28-year-old Victor Diaz, has also pleaded guilty to one misdemeanor related to the bathroom assault.

A third guard has an arraignment set for December 14.

The incident in question took place around 2:30 a.m. on the 20th, when the victim in the case, a fifty-year-old African-American man whose name we’ve withheld at the request of his attorney, was heading home to Montbello from an art-gallery party in lower downtown. The man had taken a seat on one of the benches behind Union Station as he waited for the A Line train, but soon after he sat down, a security guard with Allied Universal Security Services, the multi-national company that RTD contracts with to provide protection at Union Station, approached the man and told him to leave.

What happened next has been revealed through a number of Denver Police Department arrest-warrant affidavits.

Wanting to avoid further harassment, the man decided to relocate to the nearby underground bus terminal and wait there until a train arrived. But at 2:41 a.m., four Allied Universal security guards surrounded the victim in the terminal, in a scene captured by security cameras. They argued with the man about whether he could be there, and one guard asked him if he considered himself a “tough guy.” Hunter, a white guard with a goatee, suggested they go settle the argument in a bathroom, where, he noted, “there are no cameras.”

At 2:47 a.m., security footage showed the victim getting up and walking toward the men’s bathroom near the escalators heading up to Chestnut Place. He was followed by Hunter and Diaz.

Once inside the bathroom, the man later told police, Hunter and Diaz checked the stalls to make sure they were empty. Then Hunter put on a pair of black gloves with silver dots on the knuckles and took a swing; his fist collided with the left side of the man’s face. The man said he didn’t remember anything else that happened before he woke up in his home two days later, unsure of how he even got there.

According to the DPD, the four Allied Universal security guards then conspired to cover up the bathroom beating. But one of the four, who wasn’t named or charged by the police, later snitched on his fellow co-workers.

When Hunter pleaded guilty to felony menacing on December 7, the judge at his arraignment asked, “You were in a fight with [the victim] and injured him significantly, is that true?” 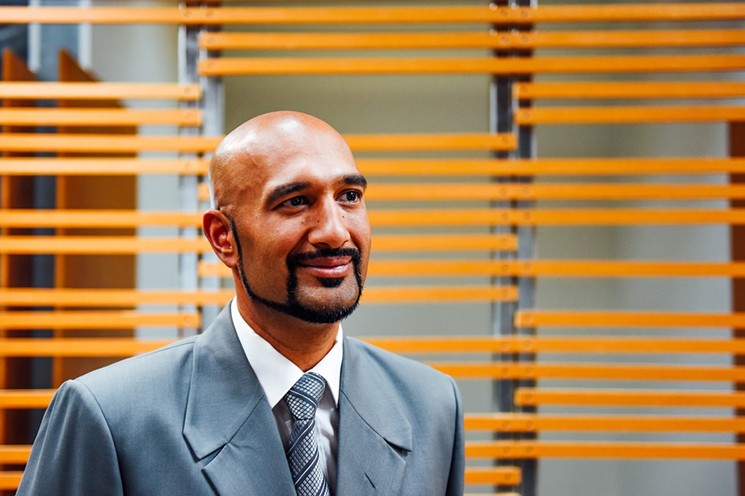 “He still suffers from head injuries as a result of what happened to him,” Mohamedbhai says. “He’s suffering from memory loss and other neurological impairments. But he’s appreciative of the efforts from the district attorney’s office to bring some semblance of justice and hold those who did this accountable. He’s interested in getting to the root cause of what happened and further holding those responsible accountable.”

When he says “root cause,” Mohamedbhai is referring, at least in part, to systematic discrimination. As detailed in “On Guard,” a significant number of people of color and people experiencing homelessness have maintained that the private security guards hired by RTD and the developers responsible for Union Station routinely harass or physically threaten them.

The security company, Allied Universal, has landed in hot water for discriminatory practices before. It was also involved in a lawsuit in Boston after one of its guards was caught on camera beating up a homeless man in December 2016. In the wake of the incident, a number of former Allied Universal employees told the Boston Globe that the company’s work culture had encouraged intimidating and assaulting homeless individuals at Boston’s North Station.

Union Station was marketed as “Denver’s Living Room” during its renovation and re-opening, but claims of harassment by security guards — with the April 20 incident caught on camera and producing guilty pleas — calls into question just who is welcome in Union Station, technically a public area because it is a multi-modal transportation hub.

After the April 20 incident, RTD did not sever its contract with Allied Universal, which is responsible for other stations on the rail lines and also works with Denver Arts & Venues. The security company itself declined to answer specific questions from Westword about the guards at Union Station beyond saying that it would require “refresher training” that “will cover customer service, cultural sensitivity and awareness, management of aggressive behavior and de-escalation techniques.”

Mohamedbhai notes that his client is still struggling emotionally with his situation. Although he’s glad he didn’t have to go through arduous testimony in any criminal jury trials, he has yet to receive any financial compensation.

“We’re evaluating everything moving forward,” Mohamedbhai says. “But it’s safe to say we’re not done. This is likely not going to end with these criminal plea deals.”
KEEP WESTWORD FREE... Since we started Westword, it has been defined as the free, independent voice of Denver, and we'd like to keep it that way. With local media under siege, it's more important than ever for us to rally support behind funding our local journalism. You can help by participating in our "I Support" program, allowing us to keep offering readers access to our incisive coverage of local news, food and culture with no paywalls.
Make a one-time donation today for as little as $1.