The caption that accompanies this photo on Representative Mike Coffman's Facebook page reads, "Got back to DC and I'm closely reading #healthcare bill text to make sure it is in the best interest of #CO06 residents." Facebook
The American Health Care Act, the measure intended to replace Obamacare, has been the target of criticism aplenty since its introduction, in part because of predictions that it would disproportionately hurt the poor and elderly in Denver and beyond. This reception, not to mention President Donald Trump's threat to unseat any Republican who votes against the bill, has put GOP members of Congress in a difficult position, and those from Colorado have reacted with varying degrees of support and obfuscation.

On Facebook, Representative Mike Coffman posted the photo at the top of this post showing him reading the measure along with a link to a House GOP page that states, "JOIN THE FIGHT: The American Health Care Act is a historic step towards making America great again. But we need your help to get it over the finish line." Also highlighted is the hashtag #passthebill.

During a subsequent radio interview with Craig Silverman, Coffman said he was leaning toward voting for the AHCA in its current form. But following a Congressional Budget Office report that estimated 24 million people would lose their insurance by 2024 under the legislation, his office put out a more cautious statement: "Rep. Coffman is reviewing the CBO analysis to see what areas of the American Health Care Act need adjustments before a final bill is enacted. But he is encouraged that the bill leaves in place the consumer protections, such as preexisting conditions and allowing dependents to remain on their parents' plan until age 26, and he believes the AHCA will face major changes before it's signed into law."

Representative Ken Buck struck a similar note in a Facebook post that slaps Obamacare but implies that the ACHA's language needs some adjustment. The item reads: "With Obamacare plan sign-ups down from last year, insurers pulling out of the market, and prices soaring for many people in the Fourth Congressional District, our job of replacing Obamacare with something better is more pressing than ever. I'm fighting to ensure the final replacement plan makes coverage more affordable and accessible."

Another longtime Obamacare critic, Representative Scott Tipton, has also resisted the temptation to simply endorse the ACHA as originally written, saying that he's "pro-repeal of the ACA [the Affordable Care Act, Obamacare's formal name], but that doesn’t mean I’m going to vote for just any replacement bill.”

For an update on these positions, we reached out yesterday, March 22, to spokespersons for Coffman, Buck and Tipton — and at this writing, reps representing Buck and Tipton have gotten back to us.

Buck spokesperson Kyle Huwa's response, delivered via e-mail, is brief and to the point: "Congressman Buck is still weighing all options on the bill."

Tipton spokesperson Liz Payne offers more details. According to her, Tipton "has not come out with a position yet" on the American Health Care Act. She adds that "he had some concerns about the bill in its original form. I know one piece he was concerned about was seniors who may not yet be eligible for Medicare but don't qualify for Medicaid and don't have insurance through an employer. He wants to make sure those people have access to health care, and on Monday, a change was made in the bill to create a fund to help states provide assistance to that category of seniors. But right now, he and his team are still reviewing the changes to see if they fully address the problems he had with the bill through the whole repeal-and-replace process."

If Tipton, Buck and Coffman join the Republican majority in offering a thumbs-up for the ACHA, which is expected to hit the House floor today, March 23, the measure would next head to the U.S. Senate, where Colorado Senator Cory Gardner will have to choose which direction to go in the wake of mixed signals he's sent on the subject. 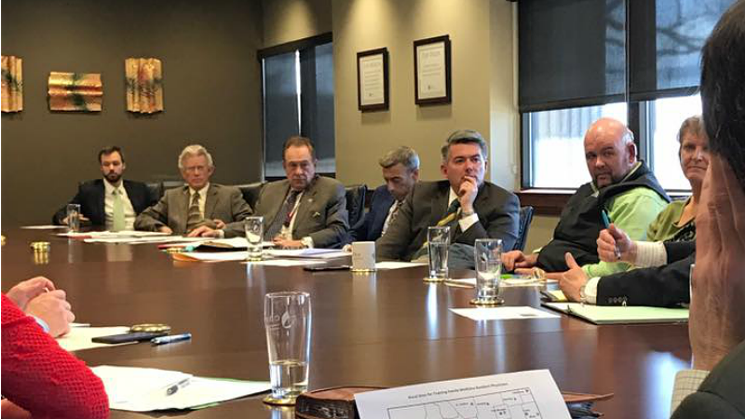 
As you know, Medicaid covers more than 72 million Americans and is the core of the health care safety net for individuals across the country. The Affordable Care Act destabilized the private insurance market and created an unsustainable path for both the states and the federal government in Medicaid. While we support efforts to repeal and replace the Affordable Care Act and make structural reforms to the Medicaid program, we are concerned that the February 10th draft proposal from the House of Representatives does not provide stability and certainty for individuals and families in Medicaid expansion programs or the necessary flexibility for states.

We are concerned that any poorly implemented or poorly timed change in the current funding structure in Medicaid could result in a reduction in access to life-saving health care services. The Medicaid population includes a wide range of beneficiaries, many of which cycle on and off Medicaid due to frequent changes in income, family situations, and living environments. The Department of Health and Human Services reports that nearly one-third of individuals covered under the Medicaid expansion have a mental health or substance use disorder. As the largest payer of mental health and substance use services in the United States, it is critical that any health care replacement provide states with a stable transition period and the opportunity to gradually phase-in their populations to any new Medicaid financing structure.

We believe Medicaid needs to be reformed, but reform should not come at the cost of disruption in access to health care for our country’s most vulnerable and sickest individuals. Any changes made to how Medicaid is financed through the state and federal governments should be coupled with significant new flexibility so they can efficiently and effectively manage their Medicaid programs to best meet their own needs. We also believe a gradual transition is needed to ensure states have the time to successfully implement these new changes. The Affordable Care Act is not working for states or the federal government and must be repealed and replaced with a plan that reforms Medicaid and protects individuals and their families over the long term. However, the February 10th draft proposal from the House does not meet the test of stability for individuals currently enrolled in the program and we will not support a plan that does not include stability for Medicaid expansion populations or flexibility for states.

In a more recent Facebook post, however, Gardner framed a meeting with representatives from the Colorado Hospital Association in the context of evil Obamacare, not the AHCA's weaknesses.

"Obamacare’s failures hit our rural Colorado communities hard, with premiums rising by more than 25 percent on some parts of the Western Slope," reads the text accompanying the second photo seen here. "I’m glad I got the chance to sit down today and partake in a rural healthcare roundtable with the Colorado Hospital Association to discuss how we can provide access to affordable health insurance to our rural communities."

On March 22, we also contacted Gardner's office to see if he's firmed up his stance on the ACHA. Thus far, radio silence.