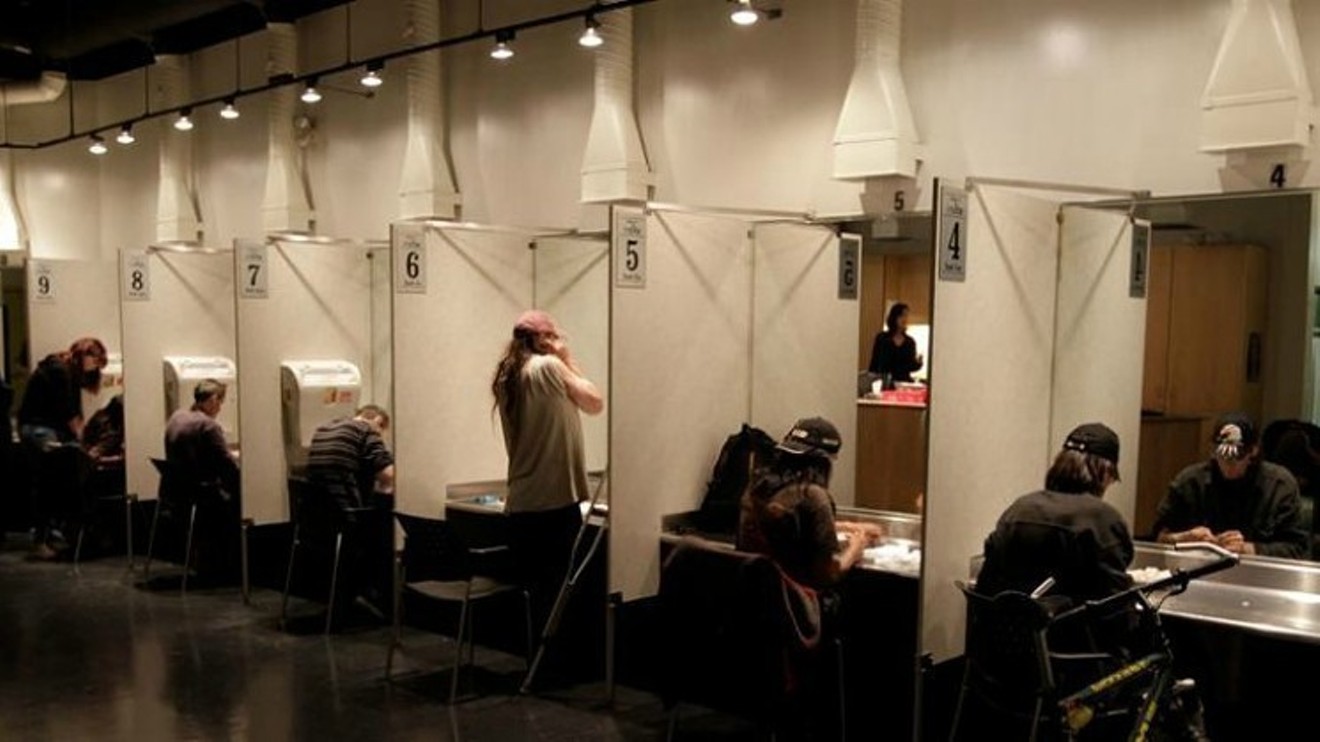 Injection booths at Insite, a supervised injection site in Vancouver visited by a delegation from Denver in January. Facebook
The debate over supervised use sites in Denver is heating up, with both advocates and opponents of such facilities — which would legally allow people to use drugs including heroin, methamphetamine and cocaine under medical supervision — throwing out all sorts of facts and figures to support their respective side of the argument.

Opponents of a site in Colorado have pointed to an increase in overdose deaths in Vancouver as an argument against the concept. However, the numbers cited on radio stations such as KNUS, as well as at demonstrations against supervised use sites, have been all over the map — and are not always accurate. 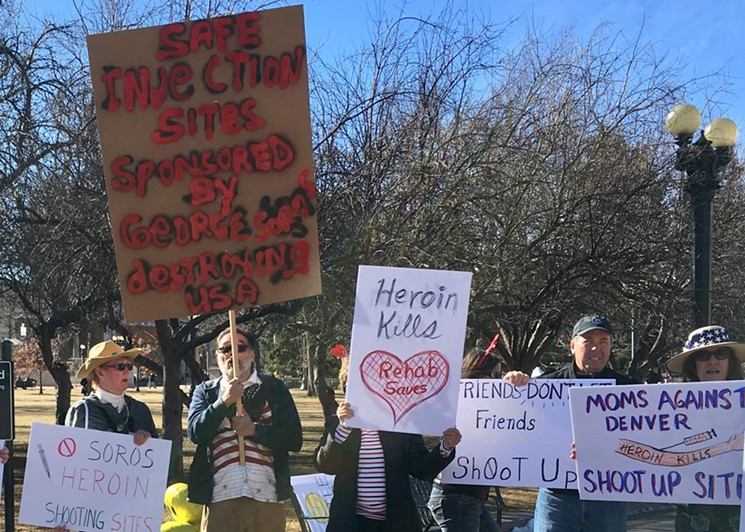 Demonstrators against supervised use sites made their presence known during the Marade on January 21.
Chris Walker
Multiple times, we’ve heard opponents of supervised use say that in Vancouver — which, with 630,000 people, has a slightly smaller population than Denver’s 710,000 — over 1,380 people died from drug overdoses in 2017, compared to 201 people in Denver that year.

“That says it all right there,” declared KNUS host Peter Boyles on his show, using the aforementioned statistics and blaming the seemingly large discrepancy in deaths (close to 1,200 more people!) on the fact that Vancouver has supervised injection sites, which he believes are spreading drug addiction.

While 375 deaths is still higher than Denver’s 201 deaths in 2017, there is another key difference between what’s going on in Vancouver and what's happening in Denver, and that’s the prevalence of fentanyl. Along with Vancouver’s precipitous rise in overdose deaths (as seen on the chart below), there has been an increasing prevalence of fentanyl, a synthetic opioid that’s far more potent and unpredictable than heroin. 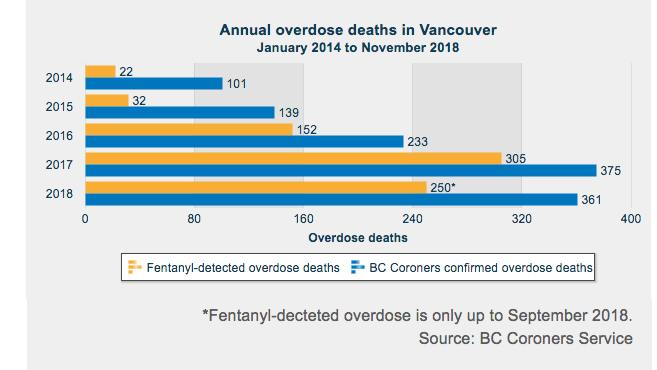 There were 375 overdose deaths in Vancouver in 2017.
City of Vancouver
When Westword interviewed the head of Colorado’s largest syringe-access program, Lisa Raville, about the presence of fentanyl in Denver, she said that her organization, the Harm Reduction Action Center, provides fentanyl testing strips to its participants. The organization has found fentanyl present in about 40 percent of street drugs tested in Denver.

“Some of our folks are telling their dealer, ‘Hey, we know there’s fentanyl in here,’ and sometimes the dealers don’t even know,” she says. The percentage of drugs — even meth — laced with fentanyl or fentanyl analogs appears to be increasing in this city, but is still far lower than in Vancouver, Raville adds.

“We’ve heard that people are no longer testing their drugs for fentanyl in Vancouver, because people just assume it’s in all their drugs there now,” she says. “Knowing about the presence of fentanyl is important, because you’ll want to change dosage, or do the plunger slower, or make sure a friend has [anti-overdose drug] Narcan on them.” 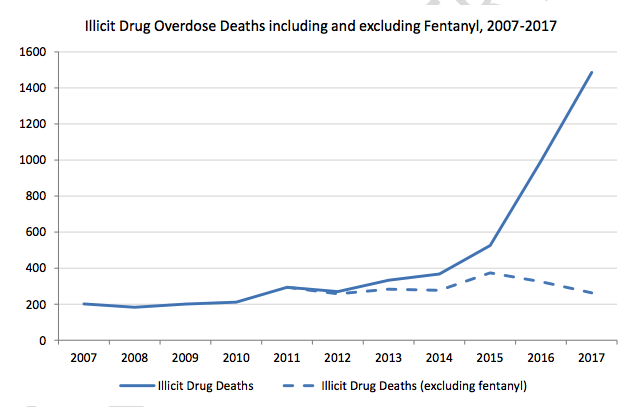 Note that these numbers are for all of British Columbia, not just Vancouver.
British Columbia Coroner's Service report
A broader study released in late 2018 by the British Columbia Coroner’s Service notes that in 2017 and 2018, fentanyl accounted for roughly 80 percent of overdose deaths across the region. When comparing the overall death rate in the region with that of earlier years, the agency concludes: “Illicit fentanyl-detected deaths appear to account for the increase in illicit drug overdose deaths since 2012 as the number of illicit drug overdose deaths excluding fentanyl-detected has remained relatively stable since 2011.”

The British Columbia study does not mention supervised use sites. But the City of Vancouver’s website does, and actually recommends expanding access to them: "While various harm reduction efforts have been, and continue to be, hugely successful in saving lives, the situation will only really improve with intensified efforts on expanded outreach and harm reduction."
KEEP WESTWORD FREE... Since we started Westword, it has been defined as the free, independent voice of Denver, and we'd like to keep it that way. With local media under siege, it's more important than ever for us to rally support behind funding our local journalism. You can help by participating in our "I Support" program, allowing us to keep offering readers access to our incisive coverage of local news, food and culture with no paywalls.
Make a one-time donation today for as little as $1.