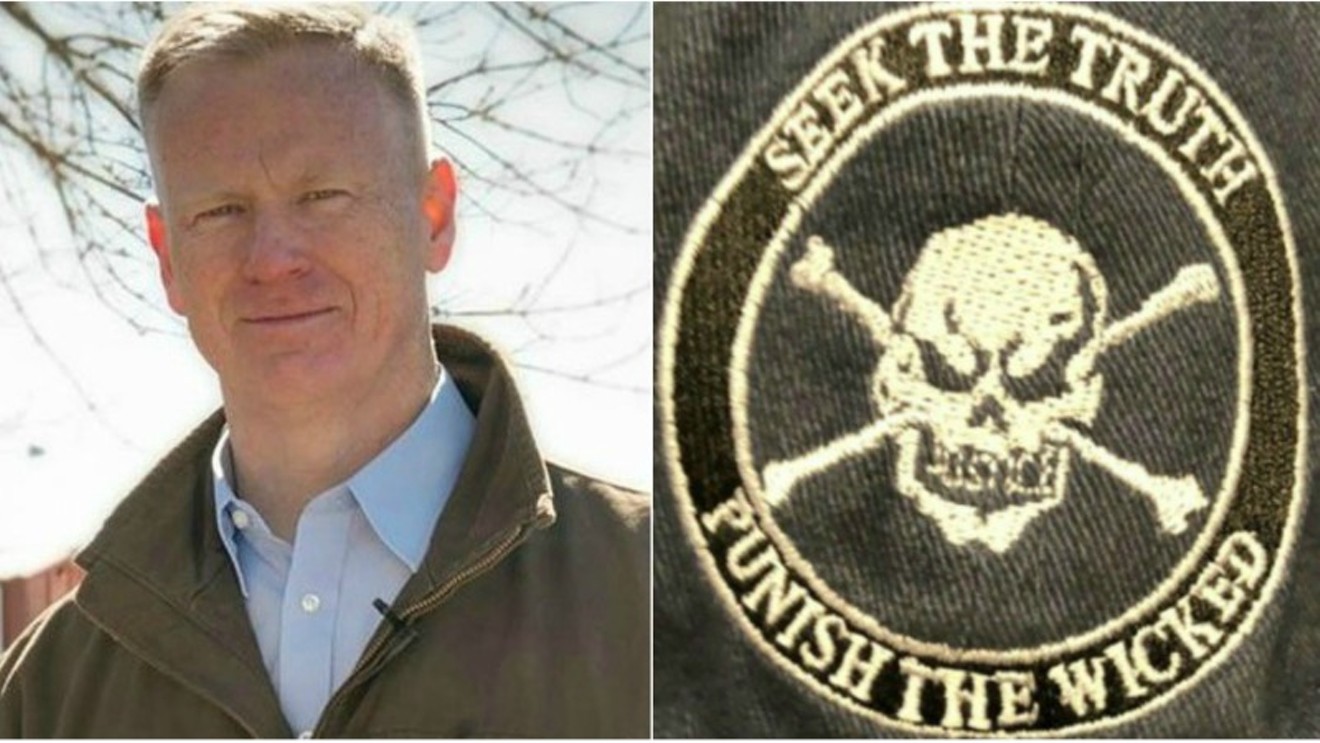 Colorado Attorney General candidate George Brauchler and the logo on hats worn by members of his 18th Judicial District DA's office staff at a recent convention. File photo/Special to Westword
Plenty of candidates like to cultivate a tough image, but George Brauchler, the Republican nominee for Colorado Attorney General, actually has a logo to match: an angry-looking skull with the word "Justice" in place of teeth emblazoned over crossbones and circled with the phrases "Seek the Truth" and "Punish the Wicked."

This emblem isn't being used as part of Brauchler's AG campaign, but at the Colorado District Attorneys' Council fall conference in Breckenridge late last month, members of his current staff with the 18th Judicial District DA's office were rocking caps sporting the symbol, much to the surprise of at least one attendee, who sent the photo at right above to Westword.

According to Brauchler, the likeness of this bony bro isn't new. "As long as I've been DA, we've incorporated it for T-shirts at the conference," he says. "And this year, it was hats."

As for the origin of the design, he says, "It grew out of my time in Iraq, when I was the chief of military justice in Tikrit. One of the early things I had to do is go around and visit all the bases, labs and facilities. The first day, I went to introduce myself to these guys and get the lay of the land, and on their front door, they had a seal that's not dissimilar from the one we use. And I thought, that's what we do on the side of criminal justice. We seek the truth, but we limit our justice to punishing the wicked."

George Brauchler and his team (at the table to the right) during the 2015 sentencing of the Aurora theater shooter to life in prison without the possibility of parole. Brauchler had sought the death penalty in the case.
File photo
Inspired, Brauchler took a photo of the logo, and after being elected district attorney upon his return to the States, he had a version of it printed on shirts for the conference. "Every year when we go there, we do it as a team-building thing. It's good for morale. And this year, we did hats — which weren't as popular as the shirts."

At present, Brauchler is engaged in a no-holds-barred contest against Democratic nominee Phil Weiser in which both sides are using a wide variety of material to attack their opponent. But when we asked Colorado Democratic Party spokesman Eric Walker for his take on the image, he offered a no-comment rather than using it as a way to highlight Weiser's views about the death penalty; he thinks it's too expensive and argues for it to be eliminated, while Brauchler is pro-capital punishment, as witnessed by his unsuccessful attempt to have it imposed against the Aurora theater shooter.

For his part, Brauchler doesn't see the logo as particularly bloodthirsty. "It's actually a limiting thing," he stresses. "We're not trying to punish everyone. We only dole it out to the wicked."

If he's elected as Colorado's AG, Brauchler isn't sure if he'll have skull-and-crossbones gear made up for his new charges. "The attorney general position is so much broader that I don't think it would apply to the whole office — but maybe it would to aspects of it. And who knows if they'll still use it at my office now. Maybe they'll say, 'Let's get rid of it once George is gone.'"

A certain skeleton might have a problem with that....
KEEP WESTWORD FREE... Since we started Westword, it has been defined as the free, independent voice of Denver, and we'd like to keep it that way. With local media under siege, it's more important than ever for us to rally support behind funding our local journalism. You can help by participating in our "I Support" program, allowing us to keep offering readers access to our incisive coverage of local news, food and culture with no paywalls.
Make a one-time donation today for as little as $1.