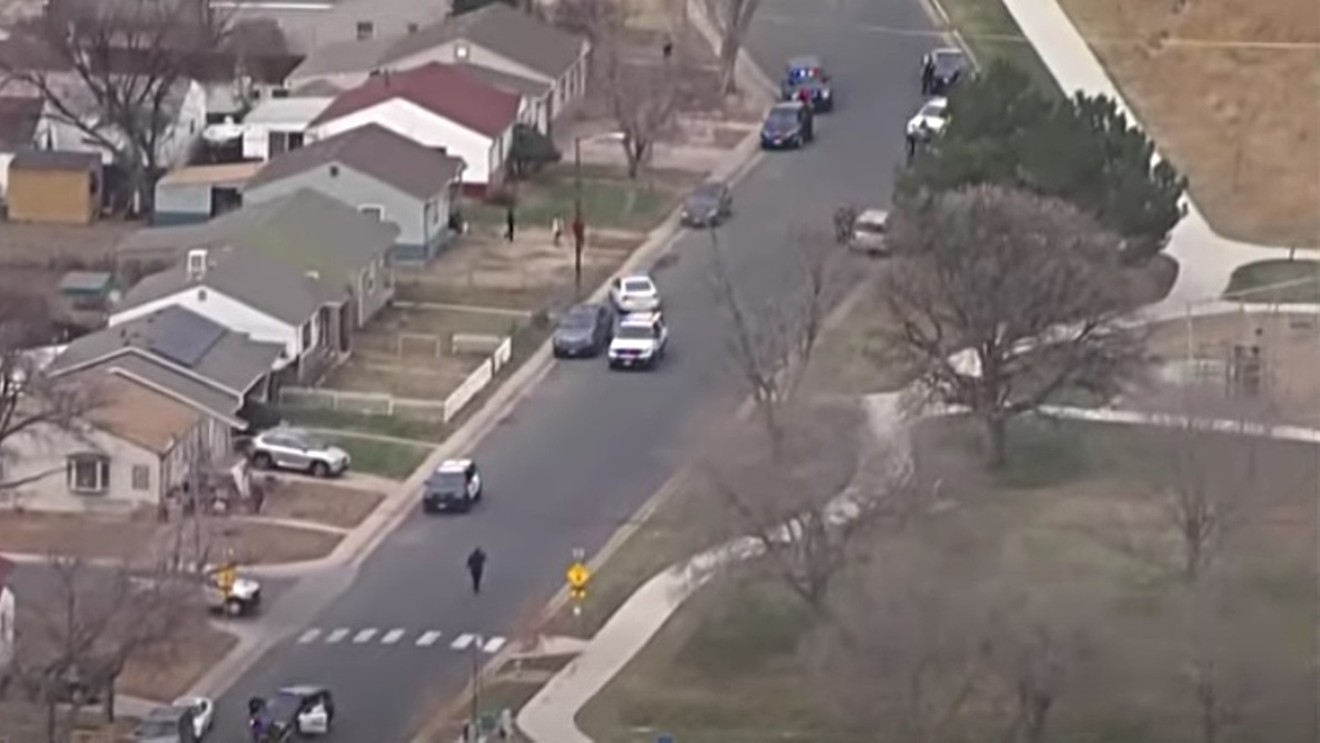 An overhead view of Nome Park in Aurora after the shooting. 9News via YouTube
During the early afternoon of November 15, following a bloody weekend that included the fatal gun-down of an eighteen-year-old in Aurora the previous evening, six Aurora Central High School students were injured during a drive-by shooting at Nome Park.

The victims, who range in age from fourteen to eighteen, are all expected to survive. But the number of individuals hurt, the fact that the shooting took place in broad daylight, and the park's location at 1200 Nome Street, just steps away from a big Aurora high school, instantly transformed the incident into a symbol of rising gun violence that drew reactions from politicians and advocacy groups alike.

The latest update from the Aurora Police Department, issued at 6:27 p.m. November 15, notes that 911 operators in the city began receiving calls about a shooting at Nome Park at approximately 12:45 p.m. that day. Officers working at Aurora Central, as well as colleagues patrolling other parts of the city, rushed to the park, where they found five teens suffering from gunshot wounds.

Aurora Central High instituted lock-in procedures in the immediate aftermath of the shooting.

According to the APD, "There were possible suspects on foot as well as driving by in a vehicle." No description of that vehicle has been released, but investigators found "numerous shell casings of different caliber," suggesting that more than one shooter may have been involved

Aurora Police Chief Vanessa Wilson subsequently took part in a press conference about the shooting. Gang-related attacks have taken place at the park in the past — Dangelo Damon, nineteen, was sentenced to eighteen years in prison in October 2020 after severely wounding another teen there the year before — but Wilson didn't immediately blame such groups for what went down. Instead, she concentrated on violence in general. "I think enough is enough," she said. "We need to come together as a community. This is a public-health crisis. There’s a violence crisis across the nation right now. I think we all need to pay attention."

Here's a video of Wilson's appearance, from Denver7:
Among those who weighed in during the hours that followed were Aurora mayor and former congressman Mike Coffman. "A shooting today in a park by Aurora Central High School has left six young people hospitalized," he said. "My prayers are with the injured and their families. As the facts surrounding this incident become known, I look forward to hearing from our Chief of Police and from our District Attorney about what actions will be taken to apprehend and prosecute, to the fullest extent of the law, those responsible for this incident. The most important function of government is the protection of its people, and I strongly believe that public safety must always be the top priority for this city."

Two officials serving Aurora in the Colorado Legislature also shared their thoughts."I am devastated to learn of today’s shooting in Aurora that led to the hospitalization of six young people in our community," said Senator Rhonda Fields in a statement. "As a parent who lost her son to gun violence, I understand the shock and horror these parents are experiencing. No mother or father should be afraid to let their son or daughter go play at the park, attend school or go to the movie theater, yet they are forced to live in fear as gun violence continues to wreak havoc on our communities. We cannot turn a blind eye to gun violence, and we cannot let more kids become a statistic. These are precious lives that must be cared for and protected. As more details unfold, I am keeping the teens and their loved ones in my thoughts and want to extend my sincerest gratitude to the first responders who tended to the scene."

Added Representative Dominique Jackson: "Today, we were alerted to the news that six students from Aurora Central High School were injured in yet another tragic act of gun violence. My heart breaks for them and their families, and I pray for their full and speedy recovery. No parent should ever have to meet their child at the hospital or pick up their student from school because of gun violence. I am grateful to the first responders, teachers and school administrators who responded to the shooting. Too many people are dying by firearms in our country. It is a public health crisis, and we should treat it with the seriousness that demands. I know our community will come together and help each other heal the pain that we all feel today."

Governor Jared Polis, in Washington, D.C., for the signing of the infrastructure bill, offered this: "I am so saddened by the violence that took place in Aurora today. Our children need to feel safe in parks, in our schools, and parents need peace of mind that their students are safe in our neighborhoods. My prayers are with the victims, their families, and all of the concerned students and parents in Aurora. I have spoken with Mayor Coffman and extended my administration’s support as the investigation evolves, reiterating my commitment to working with our cities to ensure that tragedies like this don’t continue to happen in our communities, and hope the perpetrator or perpetrators will be brought to justice."

In a joint press release, the Colorado chapters of Moms Demand Action and Students Demand Action were more explicit in connecting the Nome Park shooting to the need for progressive gun laws. Hannah Sanders, a Students Demand Action volunteer at the University of Colorado Boulder, stated, "Our hearts break for all of those harmed by today’s tragic shooting in Nome Park The fear of being wounded or killed by gun violence while we're in our communities should not be a part of our experience growing up, but for far too many students it is our reality. We must do more to protect all of our communities from gun violence."

The organizations point out that firearms continue to be the leading cause of death among children and teens in Colorado — and gun-related fatalities in the state increased by 32 percent from 2010 to 2019.

Police encourage anyone with information about the Nome Park shooting to contact Metro Denver Crime Stoppers at 720-913-STOP (7867).
KEEP WESTWORD FREE... Since we started Westword, it has been defined as the free, independent voice of Denver, and we'd like to keep it that way. With local media under siege, it's more important than ever for us to rally support behind funding our local journalism. You can help by participating in our "I Support" program, allowing us to keep offering readers access to our incisive coverage of local news, food and culture with no paywalls.
Make a one-time donation today for as little as $1.