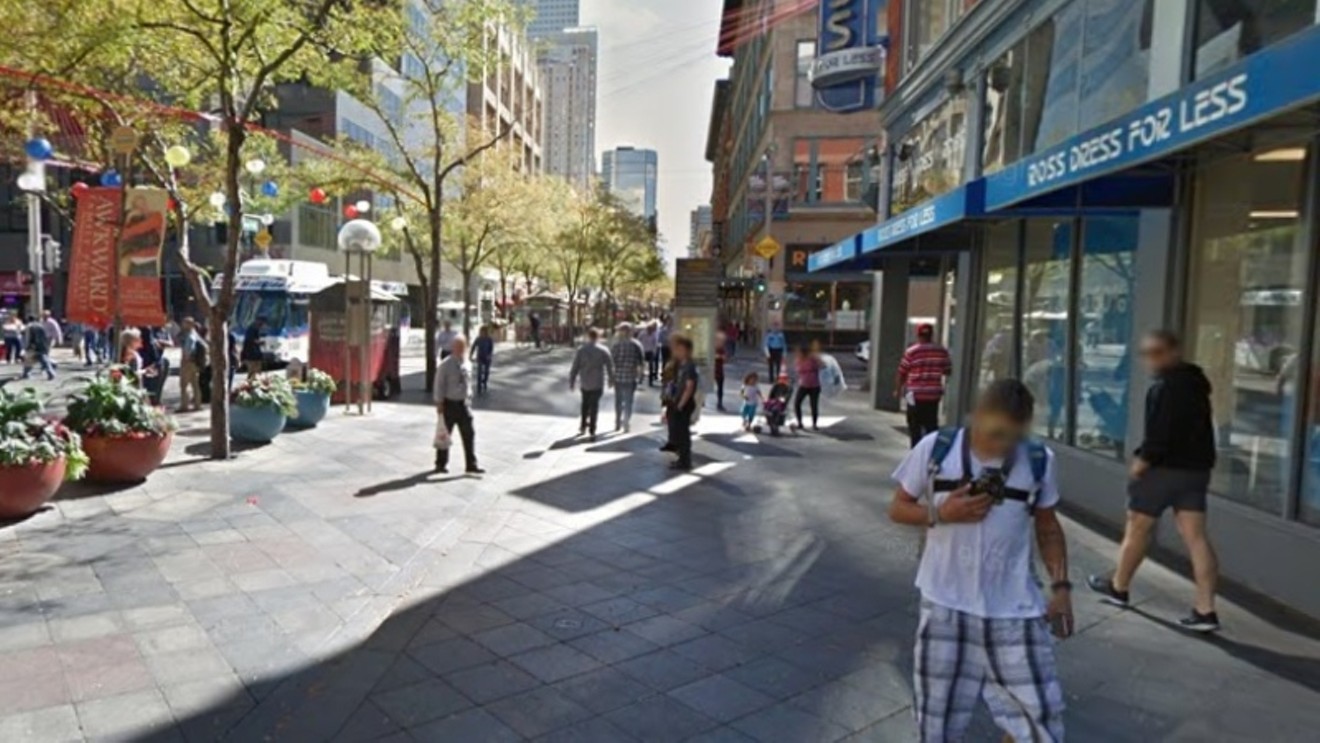 The shooting early on November 15 took place on the 800 block of the 16th Street Mall. Google Maps
The run of fatalities continued in metro Denver this weekend, with a 21-year-old female killed in a Westminster traffic accident and an eighteen-year-old man shot to death in Aurora within a fifteen-minute span on November 14. Within Denver city limits, there were four shootings and a stabbing — with a fifth shooting reported on the 16th Street Mall early this morning, November 15.

According to the Westminster Police Department, the two-vehicle street-racing smashup that took the life of a 21-year-old female took place at 9:10 p.m. on November 14 near the intersection of 105th Avenue and Sheridan Boulevard. The woman was not breathing when officers arrived; officers performed CPR until rescue units arrived and transported her to an area hospital, where she was pronounced deceased. The driver of the second vehicle remained on the scene and is said to be cooperating with investigators, who don't believe either drugs or alcohol were involved in the incident.

This was at least the second fatal traffic accident of the day in the northern suburbs. The Commerce City Police Department noted that at 3:05 a.m. on November 14, officers were called to the 5700 block of Sand Creek Drive South after a collision between a 1997 blue Ford Ranger and a 2010 gold Mercedes sedan. Two passengers in the Ranger were hospitalized, and one subsequently died — the ninth person in Commerce City to be killed in an automobile crash this year. The Mercedes driver also experienced serious injuries.

Casualties were not all the result of car accidents. At 9:25 p.m. on November 14, the Aurora Police Department responded to the 13000 block of East 33rd Place after being alerted to a shooting. There they learned that an eighteen-year-old man had been rushed to a local hospital in a private vehicle after suffering a gunshot wound; he didn't survive his injuries.

The Denver Police Department stayed busy this weekend, sharing reports on its Twitter account. The incidents started early, with a tweet at 6:35 a.m. on Friday, November 12, announcing that a death investigation was under way near East 48th Avenue and Logan Street; an update confirmed that an adult male victim had been shot and the case was being investigated as a homicide.

Just over an hour later, at 7:41 a.m., the DPD revealed preliminary details about another fatal shooting, this time involving an adult male on the 1200 block of South Federal Boulevard. That afternoon, the department announced that 26-year-old Jerry Doung was being held on suspicion of first-degree murder in relation to the crime.

Other DPD actions on November 13 and 14 pertained to weapons being used in bad ways, but without fatal results. The timeline:

November 14, 8:18 p.m.
A shooting on the 1700 block of West Mississippi Avenue. One victim seriously injured.

Individuals with information about any of these crimes can contact Metro Denver Crime Stoppers at 720-913-STOP (7867).
KEEP WESTWORD FREE... Since we started Westword, it has been defined as the free, independent voice of Denver, and we'd like to keep it that way. With local media under siege, it's more important than ever for us to rally support behind funding our local journalism. You can help by participating in our "I Support" program, allowing us to keep offering readers access to our incisive coverage of local news, food and culture with no paywalls.
Make a one-time donation today for as little as $1.