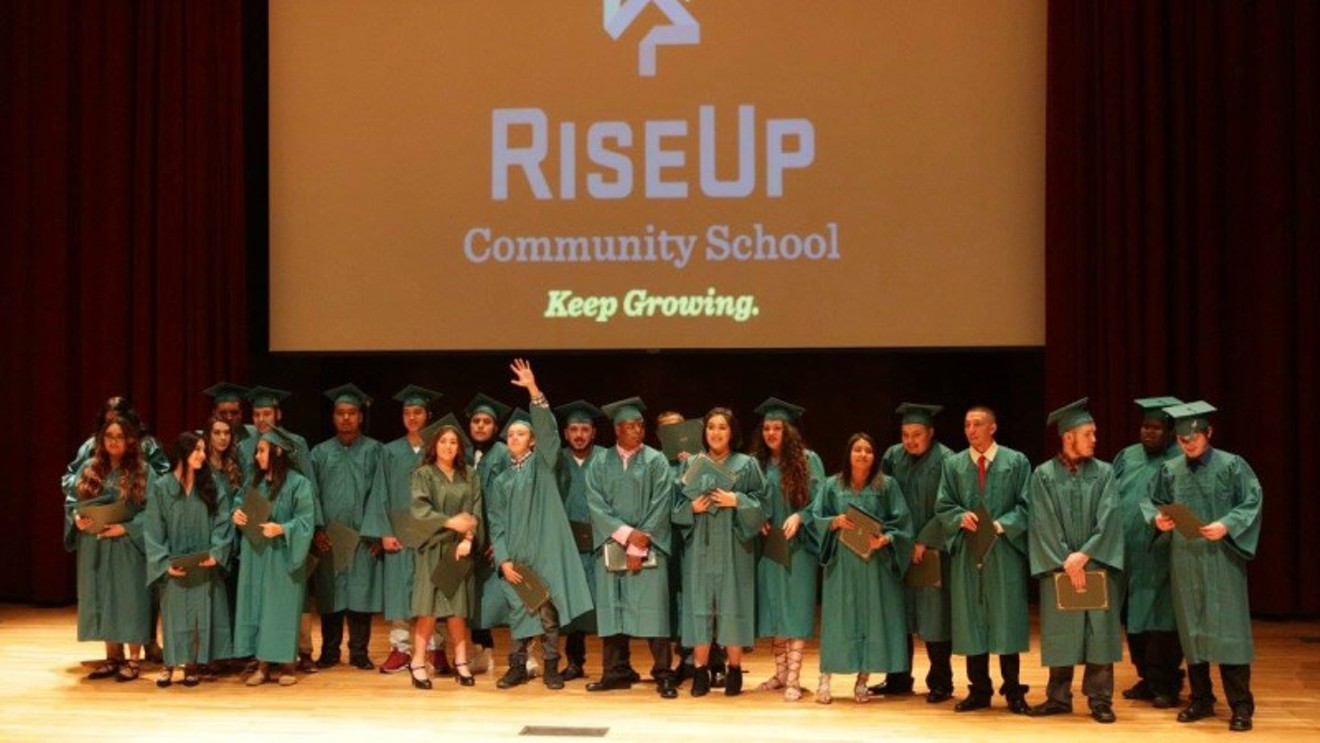 Graduates at a RiseUp Community School ceremony in January. Facebook
Armed with nothing more than a Snapchat photo and a request from the Lakewood Police Department — which had yet to produce a warrant for the suspect it was requesting from the Denver Police Department — DPD officers entered RiseUp Community School on April 24 and wreaked havoc for nearly an hour, lying to students about their reason for visiting, holding guns to a teacher, and calling staff at the Denver Public School "libtards."

The highly publicized incident caught the attention of Padres & Jóvenes Unidos and even led then-DPS superintendent Tom Boasberg to renounce the DPD's actions during a school-board meeting later that day. Still, seven months passed before the DPD investigation into the incident was released to RiseUp principal Lucas Ketzer, who, along with his staff, had already disputed many of the claims that the police had made.

The body-camera footage taken by police officers that day, released to Ketzer in mid-November, paints a chaotic picture.

In a statement he gave the Internal Affairs Bureau, which is charged with investigating police malfeasance, responding officer Scott Mattos said that on April 24, DPD officers received information from dispatch about a student at RiseUp (we are withholding his name because he was a minor at the time) was wanted for attempted homicide in Lakewood. "Initially I understood that this information was coming from Lakewood PD and they were in the process of typing a warrant for his arrest," Mattos continued. "Later I learned that the information came from the mother of the victim of the shooting, and she received the information from social media."

The social media information was a photo, presumably taken the morning of April 24, of the suspect standing in front of RiseUp wearing a red hoodie and jeans. 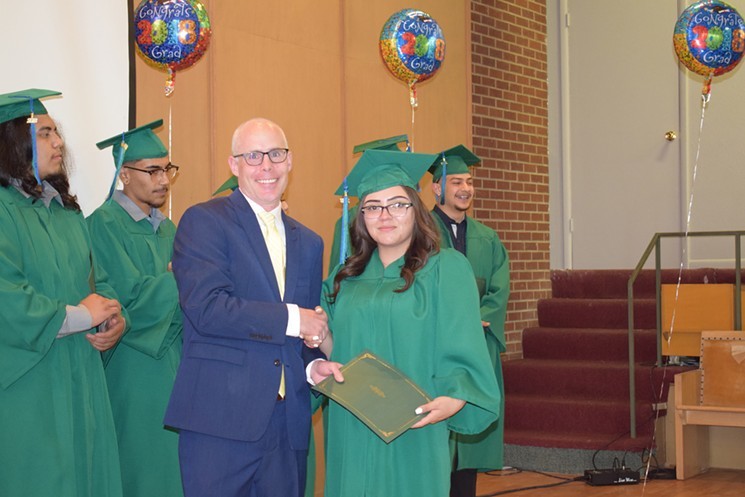 Lucas Ketzer and RiseUp graduate Sherri Villalobos during graduation ceremonies in May.
Courtesy of Lucas Ketzer
The first documented interaction between police and the RiseUp community was captured by Officer Adam Lucero's body camera, as he and at least one other officer approached a student standing outside the building that overcast morning. The student was wearing a white T-shirt and smoking an e-cigarette as he scrolled through his phone. "What's the problem?" he asked the officers as they approached.

"Somebody's calling on you acting suspicious," Lucero said. "That's all."

Perplexed, the student told the officers he was just "smoking and chilling" outside the open campus on the corner of Broadway and Lawrence Street in downtown Denver.

"[It was] probably somebody just judging me," the student said of the alleged phone call (of which there is no record). "I don't know about that, but they need to stop that racist shit."

"I don't know if it's all about that," Lucero responded.

Later in the video, Lucero spoke into the radio on his vest, saying that someone should get ahold of the detective on the case because the suspect wasn't actually wanted.

After this initial interaction, Lucero and his partner during the incident, Joseph Siemer, approached two male students, one carrying a pizza and another in a red shirt, who said they were on their way back to school. The students insisted that the officers follow them to the school so that they could prove they were, in fact, students.

An alternative view of the interaction provided by Siemer's body-camera footage shows Siemer driving his patrol vehicle close to the two students and blocking a garage entrance.

"Y'all gotta park like this to figure something out?" asked the student holding the pizza box as Siemer approached.

"Well, how else do you want us to park?" the officer asked.

"At least on the side to let people drive by," the student responded.

"Nah, that's the one perk that we get," the officer said.

Lucero's body-camera footage shows that officers first gained entry to the building through the continued interrogation of these two students, not with Ketzer's blessing, as the DPD asserted in a statement that it issued shortly after the incident.

Once inside, Lucero asked the front-desk attendant to ID one of the two students. "Can you tell me what's going on?" the staffer asked. "Yeah, we're looking for [the suspect]," Lucero replied.

More than twenty minutes after DPD officers first entered the school, Mike Eaton, head of DPS security, arrived. He asked the front-desk attendant if the school was on lockdown. "Not that I know of," the attendant replied.

At first, RiseUp's front-desk attendant told the DPD that the suspect was at school that day. But Ketzer insisted that he wasn't, which a staff sweep of the school confirmed. Leery, the DPD decided that RiseUp staffers were being uncooperative and proceeded to search the entire school in near-SWAT zeal for almost thirty minutes. When a teacher tried to block an officer from entering her classroom, he "guides," as he put it in his IAB interview, her arm out of the way to allow him and more officers in. (The officer was charged with using inappropriate force in the interaction, but the investigation exonerated him.) The officers then searched the roof after discussing the possibility that the teacher was hiding the suspect.

After the incident, the DPD maintained that no guns were drawn on any staff. But an officer's body-camera footage shows that he and other police waiting in the back of the school had their guns drawn and maintained their stance when a teacher walked out the back door. She pleaded with them to allow her back inside, but they instead made her sit in a patrol car.

Correspondence between staff members submitted to investigators described the action:


During his IAB interview, Mattos was asked about the scene. "It was my impression that the staff was uncooperative, and once they realized that we were looking for a student that was wanted for attempted homicide, the staff took steps to protect the suspect in order for him to avoid capture. Sgt. Lucero clearly advised the principle [sic] that [he] was the suspect in a shooting that occurred the night before, which would lead any reasonable person to believe that [the suspect] was likely armed with a gun. The principle had no concern that one of his students was possible armed in the school and was more concerned with protecting the student from police."

Ketzer maintains that officers informed him they were looking for the suspect and wanted to talk with him about his potential involvement in a shooting in Lakewood the previous night. Their wording gave him the impression that they wanted to interview the student, he says; they never said he was wanted (likely because there was no warrant out for his arrest). According to DPS protocol, law enforcement officials must first allow school officials to contact the parent or legal guardian of a student they want to question unless an emergency or "other exigent circumstances" exist. If the student is under eighteen, as the suspect was at the time, the parent or legal guardian must be present during the interview with a few exceptions, including "if a student is not a suspect and an officer directs a school leader that waiting for parents to arrive will impede the law enforcement investigation." (Because the suspect was underage at the time of the incident, the Jefferson County District Attorney declined to provide an update on the Lakewood case.)

According to DPS spokeswoman Alexandra Renteria, "DPS can enter a school or classroom without a warrant. Warrants are required when police (other than [school resource officer]), search a locker, personal belongings, etc.

"This situation [RiseUp] involved an exigent circumstance because DPS officers were told that the student who they were looking for was wanted for an alleged attempted murder and may be armed," she continues. "In the interest of the safety of all students and staff, a search was granted by the DPS Department of Safety."

Although after the incident DPS announced that it, too, would conduct an internal investigation, it has not responded to our questions about the progress of that probe.

The body-camera footage of Ketzer's initial interaction with Lucero and Mattos was not included in the DPD report that Ketzer received.

According to the IAB investigator, as the search was winding down, Mattos engaged in a private conversation with Lucero in which he referred to RiseUp staff as "libtards." (That body-camera footage was also absent from the information initially given to Ketzer.) Asked by the IAB investigator to describe his interpretation of the word, Mattos said this:

"To me the word means this: A libtard refers to someone who has far left, liberal, political beliefs, and these beliefs sometime cloud their judgment when it comes to what is right and wrong or legal and illegal. My intent of using the word was simply to privately describe the actions of the school staff to Officer Lucero."
KEEP WESTWORD FREE... Since we started Westword, it has been defined as the free, independent voice of Denver, and we'd like to keep it that way. With local media under siege, it's more important than ever for us to rally support behind funding our local journalism. You can help by participating in our "I Support" program, allowing us to keep offering readers access to our incisive coverage of local news, food and culture with no paywalls.
Make a one-time donation today for as little as $1.