Boulder is facing litigation over its camping-ban laws. Courtesy of Shawn Rhoades
On May 26, the ACLU of Colorado filed a lawsuit on behalf of three homeless plaintiffs, two housed residents of Boulder and one organization, charging that the city's camping ban and tent ban ordinances violate the Colorado Constitution. The lawsuit names the City of Boulder and Maris Herold, the Boulder police chief, as defendants.

"The city is enforcing ordinances pretty much just against unhoused people. The purpose of them is to target unhoused people and to try to exclude people from public space in Boulder," says Annie Kurtz, an ACLU of Colorado attorney working on the case. "They’re doing it without regard for whether people can actually access shelter in the city and, really, without regard to the kind of weather outside."

Filed in Boulder County District Court, the lawsuit alleges that the ordinances and the enforcement of the laws violate the Colorado Constitution's sections on cruel and unusual punishment, state-created danger and the right to use public space.

"I would like to see the criminalization of our lifestyle stopped. It makes a really difficult situation even more difficult, and there’s no reason for it," explains 46-year-old Jeni Shurley, who has been homeless on and off since 1996. Shurley signed onto the lawsuit after being ticketed in December 2021 for sleeping in a "bike-drawn tiny home." During one of her interactions with Boulder Police Department officers that month, Shurley was told to "get out of Boulder," the lawsuit claims.

"I’ve heard from people who have been told, 'Go to Longmont, go to county property, go anywhere but here,'" Kurtz says.

The lawsuit asserts that the available shelter spaces in the City of Boulder, primarily the Boulder Shelter for the Homeless, are "woefully inadequate to meet the needs of its unhoused residents."

According to the suit, "There are not nearly enough overnight shelter beds available for the number of people experiencing homelessness in the City. Between October 2021 and May 2022, BSH turned away at least 175 unhoused people because it had reached capacity at the time they sought services." 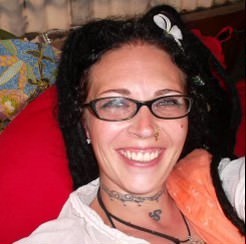 Jeni Shurley got ticketed for living outdoors in Boulder.
Courtesy of Jeni Shurley
That shelter used to have a six-month residency requirement in order for people to access the space. In July 2021, the ACLU of Colorado sent a letter complaining about the six-month residency requirement; city officials quickly announced that they'd be ending the policy the next month, asserting that they'd planned to do so even before the letter came in.

The taxpayer plaintiffs in the Boulder suit are Lisa Sweeney-Miran, vice president of the Boulder Valley School District and executive director of Mother House, a shelter for at-risk mothers and their babies, and Jennifer Livovich, executive director of Feet Forward, a nonprofit that works with people experiencing homelessness in Boulder. Feet Forward is a plaintiff in the lawsuit, too.

In addition to Shurley, the homeless plaintiffs are 26-year-old Navy veteran Jordan Whitten and Shawn "Indigo" Rhoades, a 56-year-old member of the Mescalero Apache tribe who's also a Navy veteran.

According to the lawsuit, Whitten works a 3 to 11 p.m. shift at Good Times Burgers & Frozen Custard, which prevents him from arriving at a shelter in time to get a bed. "Mr. Whitten’s mental health and military service history also make him uncomfortable sleeping in congregate settings," the lawsuit states. Whitten received a ticket for a tent-ban violation in March.

The 56-year-old Rhoades has been homeless since the fall of 2020; he's received at least eight citations for tent and camping ban violations. He was initially denied access to a bed at the Boulder Shelter for the Homeless because of the six-month residency requirement. After that was lifted, Rhoades began staying at that shelter, but was later banned for a "code of conduct violation," the lawsuit notes. "Even if Mr. Rhoades were not banned from the shelter, on any given night, he would risk being denied a bed space in BSH's lottery.

"On some nights when the weather is extreme, Mr. Rhoades still tries to seek access to BSH and is turned away," the suit continues. "For example, Mr. Rhoades made the difficult trek to BSH seeking a bed on New Year’s Eve —December 31, 2021 — when the City experienced more than 4 inches of snowfall and the temperature dropped below freezing. He was turned away. At that time, Mr. Rhoades had just undergone surgery to have his finger amputated after he developed an infection while living outside."

Shurley, who is currently living in a van, says she can't use the shelter system now because she lives with her four dogs. "The shelters have stopped anyone from entering who has any animals. I’m not allowed to go there," she points out, adding that she feels the shelter system treats her like a "criminal."

"We have just received the lawsuit and are reviewing it," says Sarah Huntley, a spokesperson for the City of Boulder. "The city will comment at the appropriate time through its filings in the court process."
KEEP WESTWORD FREE... Since we started Westword, it has been defined as the free, independent voice of Denver, and we'd like to keep it that way. With local media under siege, it's more important than ever for us to rally support behind funding our local journalism. You can help by participating in our "I Support" program, allowing us to keep offering readers access to our incisive coverage of local news, food and culture with no paywalls.
Make a one-time donation today for as little as $1.