How Much Will South Park Creators Really Pay for Casa Bonita?

Casa Bonita has been a towering pink presence on West Colfax for nearly five decades. Evan Semón
click to enlarge 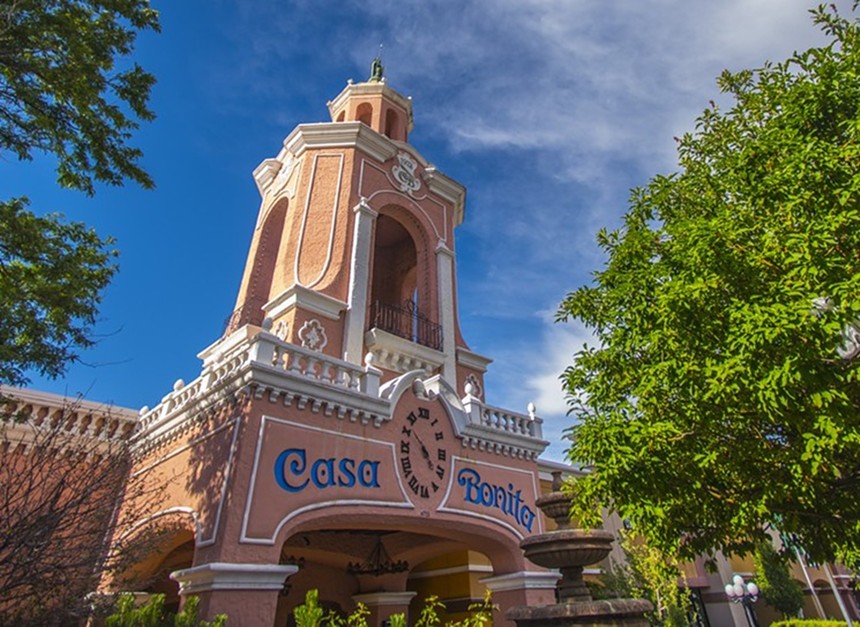 Casa Bonita has been a towering pink presence on West Colfax for nearly five decades.
Evan Semón
On September 23, Trey Parker and Matt Stone, the Coloradans who created South Park, struck a deal to buy world-famous Casa Bonita for $3.1 million. But court documents indicate that when the intellectual property rights are taken into account, the actual amount the pair will pay for the 52,000-square-foot eatertainment palace could be much higher.

"I would say $4 million," Andrew Novick, a superfan and the founder of Save Casa Bonita, a group that had been working with a private investor to buy the restaurant, estimates as the cost of the Casa Bonita intellectual property rights, which are separate from the restaurant's assets. According to Novick's calculations, the entire purchase would be closer to $7 million — and that doesn't include the building itself, which belongs to the owner of the shopping mall where it sits at 6715 West Colfax Avenue in Lakewood.

Unlike the $3.1 million figure, which is mentioned in court documents, the total amount of the purchase is not publicly accessible. The South Park creators came to an agreement for the intellectual property of Casa Bonita outside the jurisdiction of the U.S. Bankruptcy Court for the District of Colorado, according to a motion submitted by a lawyer representing Summit Family Restaurants, the bankrupt company that currently owns Casa Bonita, on September 27.

The agreement is "not subject to the jurisdiction of this Court," the motion reads, citing the fact that the intellectual property agreement does not involve Summit Family Restaurants and is instead a deal between Casa Bonita Denver Inc. and The Beautiful House LLC., a company connected to Parker and Stone.

Novick and his team, along with an unnamed private investor, made a $6.75 million offer for Casa Bonita to Bob Wheaton, the chief executive officer of Summit Family Restaurants, only to lose out to the South Park creators. "So we knew it had to be higher than us," Novick says, which is why he believes the Beautiful House LLC is paying around $4 million for the intellectual property rights.

South Park
Casa Bonita opened in 1974, following in the footsteps of a sibling in Tulsa, and quickly became a favorite with families and tourists alike. The massive space had room for 1,200 diners at a time, as well as a grotto with cliff divers, strolling musicians, an arcade, an ambling gorilla, Black Bart's cave and more. Already legendary, Casa Bonita gained international fame when South Park featured it in a 2003 episode. Stone and Parker held a bash there when The Book of Mormon opened in Denver.

But the party was over in March 2020, when Casa Bonita shut its doors because of the COVID-19 pandemic. It hasn't reopened since, aside for some free tours of the space.

The Save Casa Bonita group had been holding rallies and events over the past year to call attention to the precarious situation of the Lakewood landmark, and also to publicize its own interest in buying the restaurant. Although other developers, including the South Park creators, were rumored to be interested, the presumptive winner was revealed in mid-August, when Parker and Stone announced during a televised sit-down with Governor Jared Polis that they had come to an agreement to buy the Mexican-themed restaurant.

Lawyers representing Parker and Stone in the sale did not return a request for comment, nor did Wheaton. But the absence of the intellectual property sale from bankruptcy documents has an explanation, albeit a convoluted one.

"Well, the business reason was that [in 2011] we had a request to utilize the Casa Bonita intellectual property. And...to facilitate that license arrangement, the IP, meaning the Casa Bonita IP, was transferred from Star Buffet, Inc., to Casa Bonita Denver, Inc. But that transaction that we had anticipated never took place," Wheaton testified on June 2 during what's known as a Rule 2004 Examination in the U.S. Bankruptcy Court for the District of Arizona. Wheaton is a resident of Arizona, which is where the case was being adjudicated before being transferred to Colorado.

"We operated two Casa Bonitas: one in Tulsa and one in Denver," Wheaton continued. "The lease expired on the facility in Tulsa. We elected not to renew that lease. The founder of Casa Bonita, an individual by the name of Bill Waugh, assumed the lease from the landlord in Tulsa. Bill Waugh wanted to utilize the Casa Bonita name, which has an equally well-established reputation in Oklahoma that Casa Bonita Denver has in Colorado. Bill Waugh and I could not come to terms on the use of the Casa Bonita name, primarily financial terms. And so Bill elected to change the name to Casa Viva and operate the business for about eighteen months."

Although the Casa Bonita in Tulsa disappeared decades ago, Lakewood's was going strong until the pandemic.

Andrew Novick has eaten at Casa Bonita more than 300 times.
Courtesy Andrew Novick
After the restaurant closed, Novick says that he and his team went through two rounds of negotiations with Wheaton. "We had an outside investor and a mergers-and-acquisitions person working with us. Our offer was $6.25 million, and Bob came back to us with $6.75 million," Novick recalls. "It meant to us that we had a good number because he only came back with a one-step-up counter offer."

But Wheaton went with Parker and Stone instead. "This seems bizarre to me. He didn’t have to sell it to them. He could’ve sold it to us. There’s something about the South Park guys." Novick says, adding that he believes Wheaton became star-struck at the idea of selling to the creators of South Park.

While Save Casa Bonita wasn't going to buy the restaurant itself, leaving that to the private investor with whom the group was working, the investor was willing to bring Save Casa Bonita aboard as advisors. "We would be advising the operators with our expertise and our love," explains Novick.

While Novick, who'd tried to contact the South Park creators for over a year, remains hopeful that they will contact his group, he's not confident that they'll call him anytime soon. Instead, Parker and Stone are working with an unnamed partner with "substantial experience in the hospitality industry, who owns and operates a number of restaurants in the greater Denver area," according to court documents. All signs point to Zeppelin Development, whose projects include the Source Hotel and Market Hall and Zeppelin Station, all of which include restaurants.

As worried as Novick was about the possible closure of Casa Bonita, he's now concerned that the restaurant could become a South Park gimmick. "Obviously, there are opportunities for marketing, like plushies of Cartman with the Casa Bonita shirt," Novick says. "But do you really need to merchandise it and make it just a South Park joke? Casa Bonita predates South Park by 25 years, so it would be a shame if it just became a South Park something. Yeah, I’m pretty worried about it."

But this episode isn't over yet. Judge Michael E. Romero of the U.S. Bankruptcy Court still needs to sign off on the $3.1 million deal, which would result in the landlord of the property, BSV Lamont JCRS, receiving $900,000 from Summit Family Restaurants to clear back rent. Summit Family Restaurants also has to pay off approximately $2 million worth of debts to other entities, so that $3.1 million will be almost gone by the time all debts are paid. If an intellectual property sale goes through, though, Wheaton and his associates will walk away from West Colfax with a lot more than $200,000.

Still, it's not over until that last sopaipilla flag is dropped.

"I think we’re not totally out of moves," Novick promises. "I think we have one more move."
KEEP WESTWORD FREE... Since we started Westword, it has been defined as the free, independent voice of Denver, and we'd like to keep it that way. With local media under siege, it's more important than ever for us to rally support behind funding our local journalism. You can help by participating in our "I Support" program, allowing us to keep offering readers access to our incisive coverage of local news, food and culture with no paywalls.
Make a one-time donation today for as little as $1.