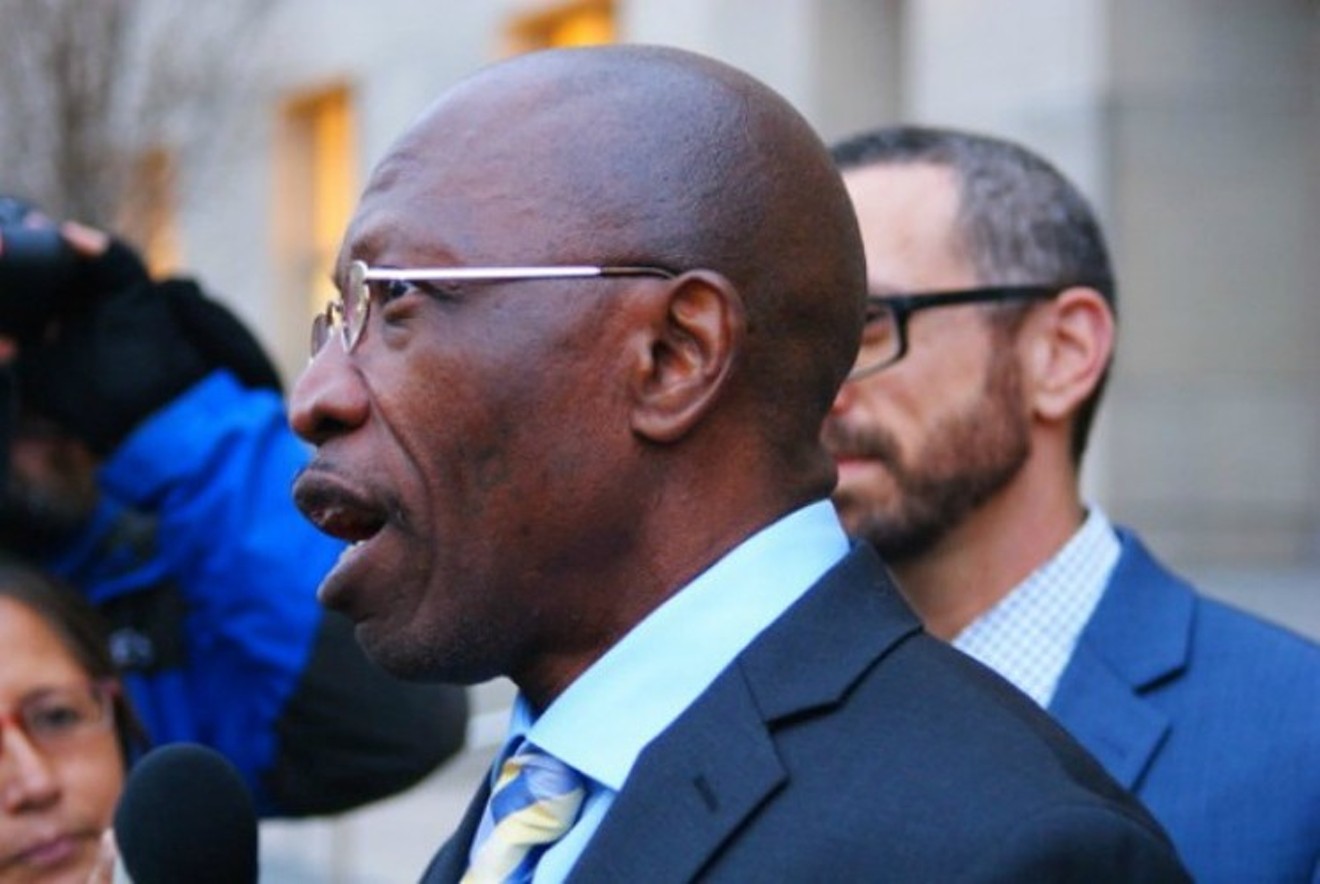 Clarence Moses-EL circa 2016. Courtesy of The Colorado Independent
In 2016, as we reported, a jury acquitted Clarence Moses-EL of a 1987 rape for which he spent nearly three decades in prison. This verdict followed then-Denver District Attorney Mitch Morrissey's decision to retry Moses-EL for the crime even after a judge had vacated his conviction the previous year in the wake of a confession by another man, LC Jackson. Now, Moses-EL is suing Morrissey, the City and County of Denver and a slew of additional defendants in federal court.

The lawsuit, filed by the Boulder-based law firm of Johnson & Klein, PLLC, and accessible below in its entirety, argues that "Mr. Moses-EL was wrongfully convicted and imprisoned for more than 28 years in the Colorado Department of Corrections (DOC). He always maintained his innocence. But shoddy investigation, the willful destruction of exculpatory biological evidence and prosecutors blinded by the desire to obtain and maintain convictions regardless of the truth left Mr. Moses-EL in the cross-hairs of a powerful criminal-justice system that would fail him time and time again."

In addition, the suit states, "the sole reason Mr. Moses-EL was ultimately arrested and prosecuted for these crimes was the victim’s dream-induced identification of him while she was on medication at the hospital. But there were many other reasons why that identification was unreliable."

In our previous coverage, we noted that the victim in the August 27, 1987 incident, spent much of the day drinking with three men, including Jackson.

She subsequently fell asleep on her couch, but she told police she was awakened by an intruder who raped and beat her, breaking bones in her face that led to her losing vision in one eye.

The victim suffered from poor eyesight before the attack and wasn't wearing her glasses when it took place. Moreover, the room was dark, making the establishment of an ID difficult. But a day and a half after she was raped, she told authorities that the identity of Moses-El, a neighbor, "had come to her in a dream" while she was convalescing in an area hospital. 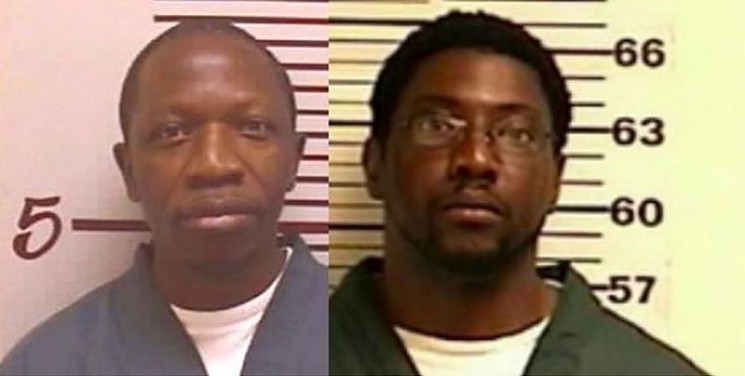 Clarence Moses-EL and LC Jackson, the man who confessed to the rape for which Moses-EL spent nearly three decades behind bars.
Courtesy of The Colorado Independent
One reason Moses-EL may have been on the victim's mind: She and his wife had gotten into a disagreement the morning prior to the crime. But the victim stood by her claims in a psychiatric examination, during which she boasted that she'd had “premonitions/visions/daydreams on a number of occasions that have come true!”

Moses-EL insisted on his innocence from the beginning and begged the cops to test biological evidence from the scene. But they didn't, as pointed out by the Colorado Independent's Susan Greene, a journalist who played an enormous part in Moses-EL finally gaining his freedom, and he was ultimately convicted and handed a 48-year sentence.

With Moses-EL behind bars, the suit contends, Jackson "was left at liberty to victimize other members of the Denver community. And he did just that. In November 1987, Mr. Jackson burglarized the home of his aunt in Denver. Around 1992, Mr. Jackson choked his then-girlfriend so hard the blood vessels in her eyeballs burst. In 1992, just about a mile away from the Denver location where he had sexually assaulted and beat the victim in Mr. Moses-EL’s case in her own home in the early morning hours, Mr. Jackson raped a middle-aged woman and her nine-year-old daughter in their respective bedrooms in the upstairs of their home at around 2:30 a.m. And around 1997, Mr. Jackson sexually assaulted another young girl in Denver, the daughter of a girlfriend of his at the time."

Jackson was successfully prosecuted for the 1992 crimes in 2006 by the same Denver DA's office that had hammered Moses-EL. Then, in April 2012, the lawsuit goes on, Moses-EL "received a letter from Mr. Jackson suggesting that he was ready to reveal information that would be useful to Mr. Moses-EL’s defense team. Over the course of several years, Mr. Jackson repeatedly made multiple admissions that implicated himself in the crimes for which Mr. Moses-EL had been wrongfully convicted."

Throughout his incarceration, Moses-EL had continued to fight the conviction. In 1995, for instance, he obtained a court order requiring that the Denver Police Department preserve biological evidence in the case so that his defense team could test it for DNA. But this victory was in vain: The DPD destroyed the evidence before analysis could take place as part of what the suit characterizes as "a pattern of their mishandling gravely important evidence." 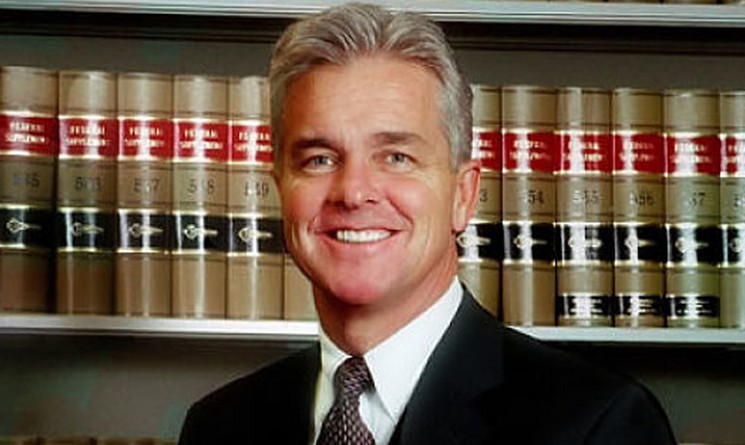 Former Denver District Attorney Mitch Morrissey is among the defendants named in the lawsuit.
File photo
Legislative efforts on behalf of Moses-EL circa 2008 kept the case in the public eye, and finally, in December 2015, Denver District Court tossed his conviction.

This action left the Denver DA's office with the option of retrying Moses-EL — and that's exactly what happened. The lawsuit states that "Defendants used every tactic — both legal and illegal — to try and cover up the decades of injustice perpetrated against Mr. Moses-EL.... In 2016, still clinging to the flawed dream-induced identification made by the victim in the hospital, and notwithstanding the fact that a man she had previously identified as her assailant had admitted to a violent sexual encounter with her at her home at the time of the attack, the Denver DA’s Office brought Mr. Moses-EL to a second trial for the 1987 attack. On November 14, 2016, a Denver jury found Mr. Moses-EL not guilty of all charges."

The suit asks that the United States District Court for the District of Colorado award Moses-EL "all relief as allowed by law and equity, including, but not limited to the following:

a) A declaration that Defendants violated the federal constitutional rights of Mr. Moses-EL;
b) Actual economic damages as established at trial;
c) Compensatory damages, including, but not limited to, those for past and future pecuniary and non-pecuniary losses, emotional distress, suffering, loss of reputation, humiliation, inconvenience, mental anguish, loss of enjoyment of life, and other non-pecuniary losses;
d) Punitive damages for all claims allowed by law in amount to be determined at trial;
e) Pre-judgment and post-judgment interest at the highest lawful rate;
f) Attorney’s fees and the costs associated with this action as allowed by law; and
q) Any further relief that this Court deems just and proper, and any other relief as allowed by law."

Click to read Clarence Moses-EL v. The City and County of Denver.