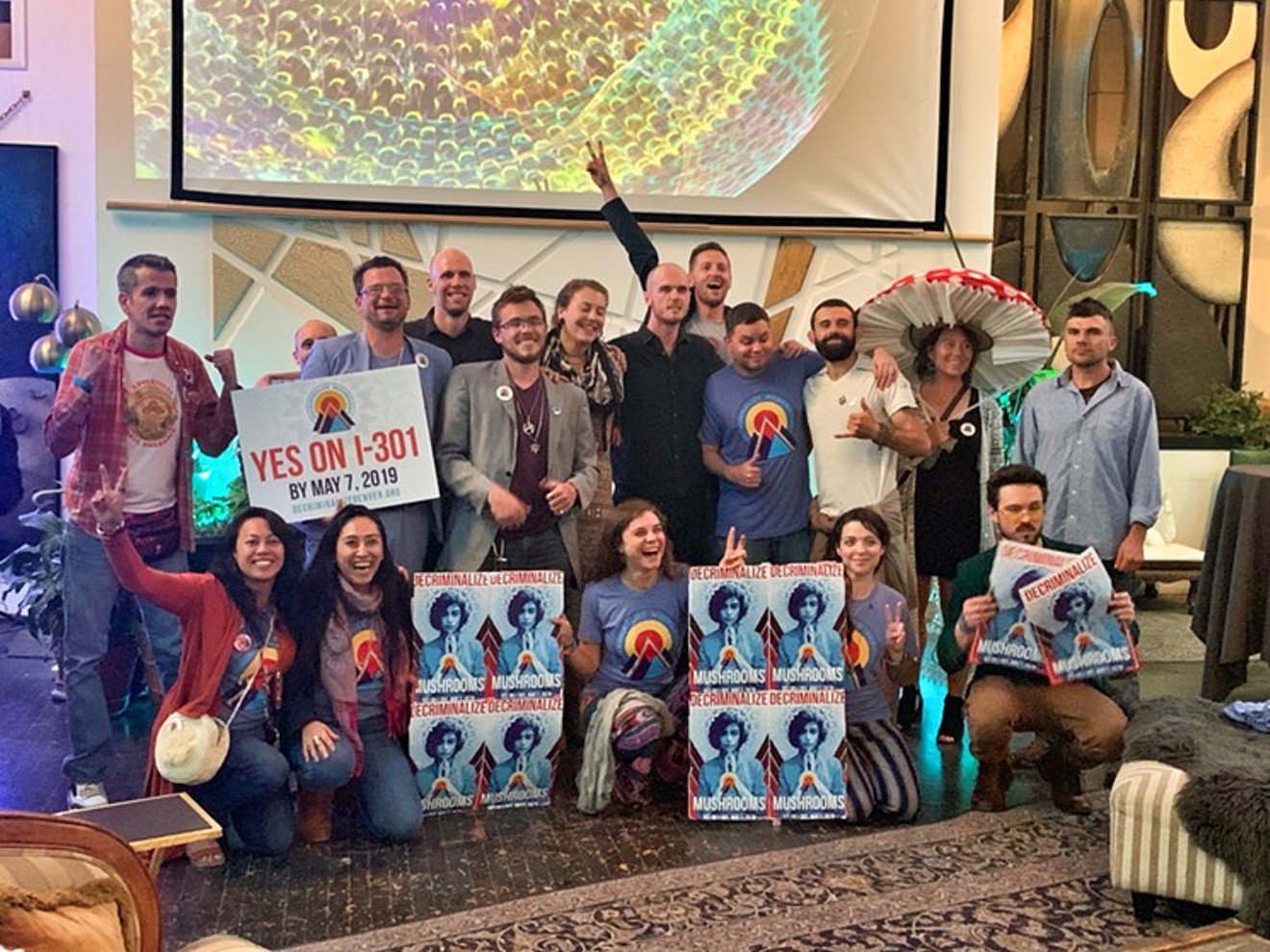 There's debate in the mushroom community over how to approach decriminalization in Colorado. Conor McCormick-Cavanagh
The 2022 Colorado ballot will likely include a measure to decriminalize psychedelics — and perhaps more than one, as local grassroots advocates scramble to match proposals just filed by a national group.

"It's really important to advocate for full decrim first and foremost," Nicole Foerster said at a December 16 virtual meeting of the group she leads, Decriminalize Nature Boulder County. "If we wait too long to decriminalize or to create equitable access frameworks for psilocybin, then we allow these FDA models to take more control, and they'll be able to spend more money against groups like us [who want] to decriminalize and create equity and community-driven policies."

Decriminalize Nature Boulder County, whose membership overlaps with the group that pushed the successful 2019 campaign that made Denver the first city to decriminalize psychedelic mushrooms, held the meeting as a way to rally advocates to take action. But a Washington, D.C.-based political action committee could beat them to the ballot box.

On December 3, the New Approach PAC, which has supported various marijuana legalization efforts across the country and was involved in the recent Oregon vote to create legal, regulated access to psilocybin, submitted language for two decriminalization initiatives to the Colorado Secretary of State's Office.

One of the New Approach initiatives seeks to decriminalize ibogaine, DMT, mescaline (excluding peyote), psilocybin and psilocin for those 21 and older; the implementation of the decriminalization of these substances would be controlled by a Natural Medicine Advisory Board, with members appointed by the governor. Under this initiative, the state would also license healers and healing centers that could supply these substances and assist people in using them. It would cap the allowable amount of the active psychoactive substance at four grams.

The second initiative focuses solely on decriminalizing psilocybin and psilocin, the active ingredients in psychedelic mushrooms, which are commonly referred to as psilocybin mushrooms. Under this proposal, the decriminalization would be implemented by the Department of Regulatory Agencies; otherwise, the process would follow many of the protocols outlined in the first initiative, although just for mushrooms.

If either of these initiatives is approved by the Colorado Secretary of State's Office, proponents would need to gather signatures statewide in order to land a measure on the 2022 ballot.

"Our goal is to make the healing benefits of these natural medicines available to people they can help, including veterans with PTSD, survivors of domestic or sexual abuse, people with treatment-resistant depression, and others for whom our typical mental-health treatments just aren’t working," says Ben Unger, New Approach PAC's psychedelic program director.

But during the December 16 meeting, Foerster expressed concerns over the language in the two New Approach initiatives. "They're looking to create these top-down, restrictive policies in places where grassroots community has been the strongest and where policy has been passed by grassroots community," Foerster said. The inclusion of limits on the amount of a substance that a person could possess particularly worried her; California advocates recently clashed with New Approach on that issue.

But another local activist has no concerns about New Approach; in fact, he's now lobbying on that group's behalf in Colorado. "We're glad to have New Approach as a partner who can help us bring this level of change to the entire state, because we're going to create more opportunities for so many people to receive the help they need to deal with mental health conditions that are otherwise devastating," says Kevin Matthews, the leader of the successful Decriminalize Denver campaign. "Creating new opportunities for people to heal is what drives us, and we look forward to engaging with Colorado residents on this issue."

During the meeting, Foerster made it clear that while she and other advocates were not consulted regarding New Approach's work in Colorado, her group will attempt to engage with the PAC now. "We are trying to push and influence them to only include psilocybin and psilocin, because they said they're unwilling to do anything that's not going to set up a regulatory framework," she said.

That focus on a regulated model is designed to help as many people as possible in a safe manner, according to Unger. "We believe more people will be served and treated by making psychedelics available in a safe, regulated and consistent way," he says. "These natural medicines can be life-changing for so many, and we want people to be confident that the treatment they're receiving is high-quality and held to clear standards of accountability."

Some attending the virtual meeting expressed concerns that New Approach's fast pace regarding decriminalization initiatives in Colorado might leave some grassroots activists behind.

But Matthews thinks the pace is appropriate. "We've been discussing the possibility of statewide reform since this spring, and I'm proud of what we've accomplished so far to ensure this initiative will be ready on the timeline necessary to set it up for success," he says. "We still have more outreach and collaboration to do in the coming weeks, and it's been exciting working alongside so many of my colleagues and friends from our successful effort in Denver in 2019."
KEEP WESTWORD FREE... Since we started Westword, it has been defined as the free, independent voice of Denver, and we'd like to keep it that way. With local media under siege, it's more important than ever for us to rally support behind funding our local journalism. You can help by participating in our "I Support" program, allowing us to keep offering readers access to our incisive coverage of local news, food and culture with no paywalls.
Make a one-time donation today for as little as $1.