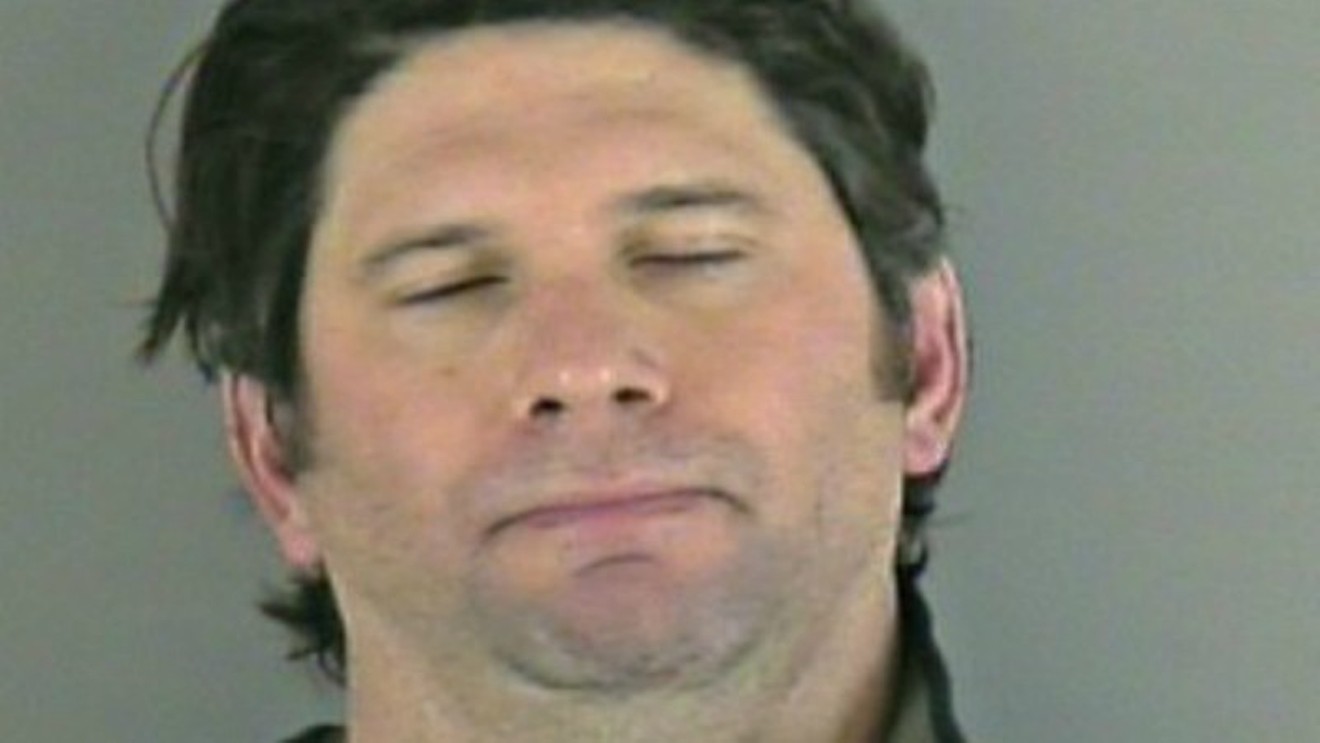 Todd Helton's 2013 mug shot. Thornton Police Department
Before the rise of Nolan Arenado, Todd Helton was unarguably the greatest player in Colorado Rockies history. But months prior to his 2013 retirement, he was arrested for drunk driving in the most publicly embarrassing moment of his public life. And now it's happened again.

According to the Knoxville News Sentinel, Helton has entered a treatment facility in Tennessee, where he currently resides, after being arrested on suspicion of driving under the influence following a single-vehicle crash.

Although news of Helton's situation is just breaking, the accident in question reportedly took place on March 18, when he was behind the wheel of his 2019 Ford F-150 pickup. Afterward, he said he'd taken an Ambien sleep aid several hours earlier. But officers on the scene say they spotted a so-called travel cup inside the vehicle that smelled like alcohol.

These details can't help recalling Helton's 2013 bust, which took place in Thornton at 2 a.m. on February 6 of that year. According to the original arrest report, Helton — driving an earlier model Ford F-150 pickup — had allegedly struck a median before pulling into a Conoco station at 128th Avenue and Colorado Boulevard. A pair of cops subsequently found the truck with its driver'-side door open and the engine still running. No one was inside, but a moment later, Helton emerged from the interior portion of the station carrying a wallet, chewing tobacco and some lottery tickets.

When Helton was told another driver had seen him hit a curb with his truck, he denied doing so — but given that the witness was speaking to the officer's partner and had consented to provide a written statement, this assertion was in dispute. So was Helton's sobriety; he's said to have smelled strongly of alcohol and was slurring his words. While being booked, Helton volunteered that he'd consumed two Igloo cups of red wine at about 8 p.m. the night before.

In May 2013, Helton pleaded guilty to driving while ability-impaired, and no other busts were reported in the next five years or so. This past October, however, he dodged a charge of leaving the scene of a crash in West Knox County, Tennessee.

The most recent incident appears to have been more serious; Helton had to be hospitalized afterward. A statement by his attorney, Stephen Ross Johnson, reads in part: "The Helton family is thankful for the officers and medical professionals who took great care of him. Because of those first responders, he was not seriously injured."

Now he's getting the help he appears to have needed since his playing days in Denver.
KEEP WESTWORD FREE... Since we started Westword, it has been defined as the free, independent voice of Denver, and we'd like to keep it that way. With local media under siege, it's more important than ever for us to rally support behind funding our local journalism. You can help by participating in our "I Support" program, allowing us to keep offering readers access to our incisive coverage of local news, food and culture with no paywalls.
Make a one-time donation today for as little as $1.