Ryan Brown being face-planted into the snow after a March 2015 traffic stop in Colorado Springs. YouTube file photo
The Colorado Springs Police Department denies that Ryan and Benjamin Brown were racially profiled during an aggressive arrest captured on video even though the City of Colorado Springs has agreed to pay $212,000 and alter some policies in order to settle the case. The CSPD also accuses the ACLU of Colorado, which represented the Browns, of inaccuracy and more over the way it's portrayed the matter. But the ACLU isn't backing down.

"We'll certainly be watching how it's going," says Mark Silverstein, legal director for the ACLU's Colorado affiliate, "and if we hear of other incidents like this, we might be back again."

The Browns were originally pulled over on March 25, 2015, for having a cracked windshield. A video of the incident, on view below, begins with Ryan, in the front passenger seat of the vehicle, asking, "What's the reason you pulled us over, officer?" He adds, "I'm recording this. Police officers pulled us over for no reason. I got this on camera."

Over the course of the next minute-plus, Officer David Nelson, who was also named in the lawsuit along with Officer Allison Detweiler and Steven Biscaro, a sergeant called to the scene later, refuses to identify himself and eventually yanks Ryan from the car, pushes his face into snow covering a nearby grassy area and begins handcuffing him. The last words Ryan says in the video are, "You see this? You see this? Excessive force."

As for Benjamin, he was searched, handcuffed and placed in a police vehicle. He was eventually accused of driving with an obstructed view — a charge to which he pleaded guilty "under coercion," the lawsuit maintains. (The document states that the plea was entered without counsel, and his multiple attempts to withdraw it were rejected.) Ryan, for his part, was cited for "obstructing and resisting" — a charge that was eventually dropped, but only after the CSPD shrugged off his complaint about Nelson's behavior. 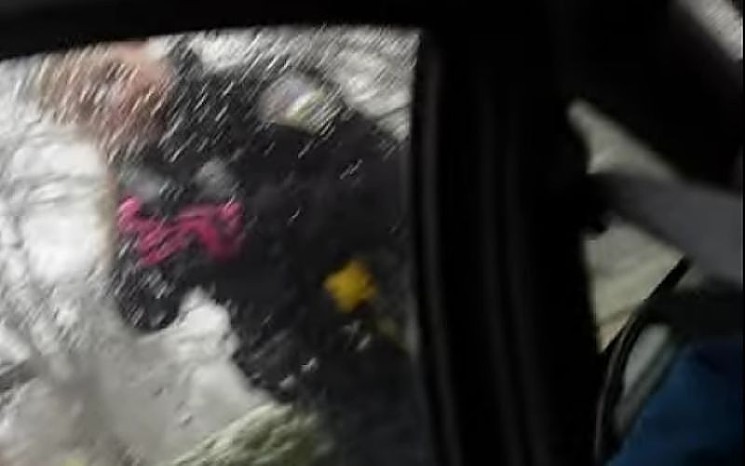 Officer Alison Detweiler holding a gun on Ryan Brown.
YouTube file photo
Silverstein points to the key words in the CSPD's statement about its investigation of the incident: "They said the officer's conduct was 'justified, legal and proper.' That sends a terrible message to police officers. It tells them, 'We're going to continue to tolerate this kind of behavior. In fact, we're going to expect it of you, because that's what we consider proper.' And to young men of color, it sends a message that this is what you can expect from the Colorado Springs Police Department."

In the beginning, the department seemed eager to fight the ACLU's allegations all the way into court — "but once we had a case on file, the city was interested in early mediation before we had spent too much time on the actual litigation," Silverstein notes. "That was a welcome development."

The city subsequently agreed to pay $212,000 to the Browns, which they viewed as "a fair sum," Silverstein allows, as well as to "tweak and improve some of their policies." For example, he continues, "One of the issues that we've had with the Colorado Springs Police Department is that it seems they are all too willing to rely on pulling a gun, using handcuffs and doing pat-down frisks as a first resort in dealing with a person of color. We've been advocating for several years that when a police officer points a gun at someone, that itself is a use of force that needs to be put in a report with a justification that superiors can read — and the police told us they were already planning to do that."

Additionally, says Silverstein, "we have encountered a number of police departments that seem to forget or overlook the Fourth Amendment standard that applies when conducting a pat-down frisk — that there need to be facts that amount to reasonable suspicion that the suspect is armed and dangerous. And the Colorado Springs Police was willing to change the wording of its policy so that it at least echoed and followed the state statute."

Nonetheless, the CSPD doesn't appear to have been happy with the resolution or the way the ACLU presented it. Late on the afternoon of April 20, several hours after the ACLU's press release announcing the settlement, the department issued a highly defensive statement insisting that it had done nothing wrong and implying that no deal would have been made if it weren't for the expense involved.

Officer Nelson pulling Ryan Brown from the vehicle.
YouTube file photo
"The Colorado Springs Police Department, together with the Office of the City Attorney, made the difficult decision to settle the Brown case," the statement begins. "Although CSPD sincerely believes the claims of racial profiling were unfounded, the decision to settle was based on comparative analysis of the high cost of legal proceedings and the risk of financial liability in the event the city did not prevail in every aspect of the lawsuit. However, there has been a complete and thorough Internal Affairs investigation of this incident, and it was determined that the actions of the officers did not violate Colorado Springs Police Department (CSPD) policy."

The statement adds that "On several occasions, the ACLU has inaccurately portrayed CSPD as a department that routinely violates citizen’s rights. The public is invited to review CSPD’s most recent Annual Use of Force report to gain an informed and fact-based opinion of the level of restraint, accountability and transparency that is central to how CSPD delivers police services."

The CSPD also claims that "in the past, the ACLU has failed to 'set the record straight' when allegations of misconduct were disproven, as in the Tally case in July 2015" — a reference to Matthew Tally, an African-American who was targeted with guns, handcuffed and detained for trying to get into his own car after misplacing his keys. The officers in the matter were reportedly cleared of misdeeds, though one of the cops is said to have quit because he didn't feel his superiors had offered him sufficient support.

The release goes on to tout the Springs department's decision to issue "over 450 body-worn cameras, which will be able to provide additional information through video footage of patrol officers’ interaction with citizens from initial contact through conclusion. Body-worn cameras provide protection both to citizens and to officers in these types of cases and accusations."

Benjamin Brown being searched by Officer Nelson.
YouTube file photo
Be that as it may, Silverstein encourages individuals to record their own video of police interactions and uses the Brown case as an example.

"One of the realities here is that without video evidence, when it's a police officer's word against an ordinary citizen who's a victim of abuse or excessive force, what's written in the police report tends to be accepted as the truth, and the only truth," he says. "Fortunately, video evidence can show the serious shortcomings of relying solely on an officer's police report. In this case, the video very clearly shows the officer shoving Ryan's face into the snow, but there is not a trace of that in the officer's report — and in the Internal Affairs investigation, the officer actually acknowledges that. He claims that he forgot he shoved Ryan's face in the show, but now that he's seen it on the video, he says, 'Yeah, I guess that happened.' His admission would never have been forthcoming without video evidence."

Silverstein emphasizes, "you have a First Amendment right to record police officers as they carry out their duties, as long as you're not physically interfering in the officer's ability to carry out those duties. Stand a short distance back, but keep the camera rolling."

Although the Brown case has been settled, the ACLU will continue to keep an eye on the Colorado Springs Police Department. For instance, Silverstein notes, "one thing the department wasn't willing to do, and which we believe they need to do, is to require police officers who conduct pat-down frisks to memorialize a short summary of the facts that the officers were relying on — the facts that the officers believed constituted adequate grounds to conduct a pat-down search. Without such a report, the sergeants and higher-ups have no idea whether their officers are conducting frisks that comport with the Constitution or not."

Granted, "the fact that Colorado Springs didn't do that doesn't make them exceptional," Silverstein concedes. "But I think the more progressive police departments are starting to realize that they should ask that of their police officers."

How progressive is the CSPD? Decide for yourself after watching the following video, which the department continues to say has nothing to do with racial profiling.