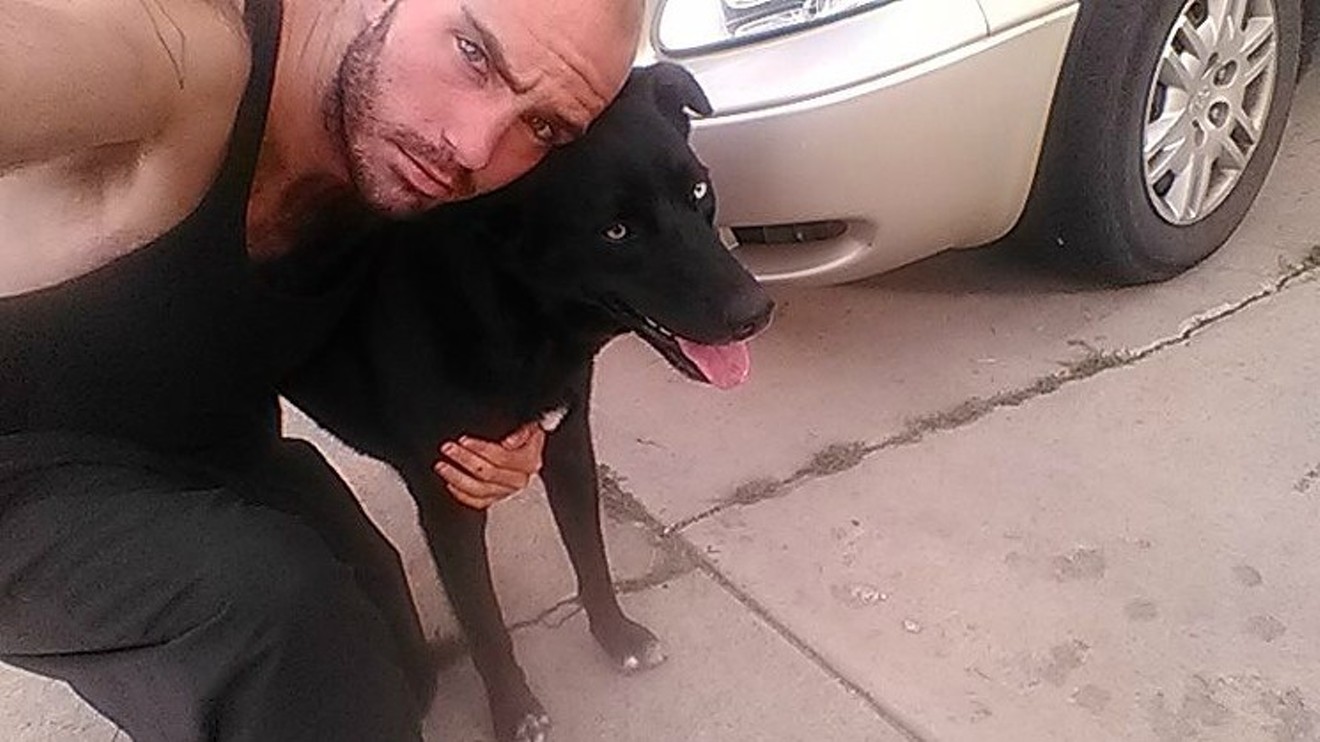 A Facebook photo of Joshua Condiotti-Wade and a friend. Facebook
Attention, Commerce City taxpayers: Officials in your town have just agreed to pay $175,000 to Joshua Condiotti-Wade, who was tased during an attempted arrest that should have never happened and actually didn't, partly because of an overreacting cop in question accidentally tripping himself.

Condiotti-Wade's lawsuit against Commerce City and two of its police officers, Chris Dickey and Ryan Sedgwick, was filed in June, making the decision to pay lightning-fast by the standards of the notoriously sluggish legal system. But this choice doesn't surprise attorney David Lane, who represents Condiotti-Wade. After all, the entire incident was captured on video.

"We had them dead to rights," Lane says, adding, "body cameras are my favorite piece of police equipment."

The Commerce City Police Department has such a troubled history that in 2016, as documented on the community's website, local officials "requested assistance from the Department of Justice Collaborative Reform...as part of their overall reform efforts to earn and uphold the public’s trust." Among the changes made at the Justice Department's behest was outfitting all officers with body cams — and the one affixed to Dickey just over two years ago captured a crazy scene.

On July 28, 2016, Condiotti-Wade was taking part in a protest at the offices of the Adams County Human Services department alongside Eric Brandt, who's made a name for himself in recent years by antagonizing local powers-that-be with provocative signage, including an oversized bird-flipping hand emblazoned with the phrase "Fuck Cops." In 2014, Lane filed suit against the mayor of Westminster, who had Brandt arrested at a city council meeting. The following year, Brandt was given a ninety-day sentence for chalking a sidewalk with crying pigs, and in 2017, he and Adrian Brown sued Adams County for what they saw as repeated constitutional violations. 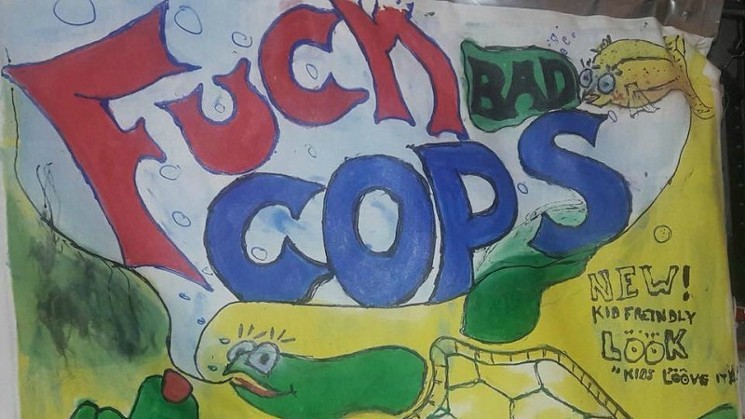 One of Eric Brandt's "Fuck Bad Cops" signs — this one labeled "kid friendly."
Facebook
According to Lane, someone inside the building "was annoyed" by the demonstration, during which Brandt and Condiotti-Wade held signs that read "Fuck Bad Cops" and "Blue Lives Murder" in an area designated as public property, and put in a call to the CCPD. Upon their arrival, officers Dickey and Sedgwick "came up to them and said, 'You guys have been asked to leave. You need to pack it up.'"

At first, Brandt balked, Lane went on. "He took the position that this was public property and they didn't have to leave. But after some back-and-forth, they started to walk away. They walked out of the parking lot onto the public sidewalk, carrying their signs with them. But one of the cops [Dickey] was apparently still angry at them, even though they'd left, and asked Eric for his ID, because he said he was going to give him a summons. Eric was complying and giving over his ID when the cop said to Joshua, 'I need your ID, too.'"

Condiotti-Wade "hadn't said anything at all during the encounter," Lane asserted. "So he said, 'No, I'm not giving you my ID.' The cop told him, 'You're giving me your ID or I'm arresting you.' Josh said, 'I don't think that's going to happen,' and the cop said, 'I think you're under arrest.'"

Next, Lane said, "the cop made a move toward Josh and fell. I guess his shoes were slick, because Josh didn't do anything to him, didn't touch him. But when the cop got up, he was pissed, and he and the other cop started chasing Josh and began to fire tasers at him. One of them hit him in the arm, but that didn't complete the circuit — so he was running around with a taser dart in his arm."

By the time Condiotti-Wade had circled back to the front of the building, reinforcements had arrived in the person of Dickey's supervisor, Commander Mark Morgan, whom Lane credited with "bringing sanity to the chaotic madness." 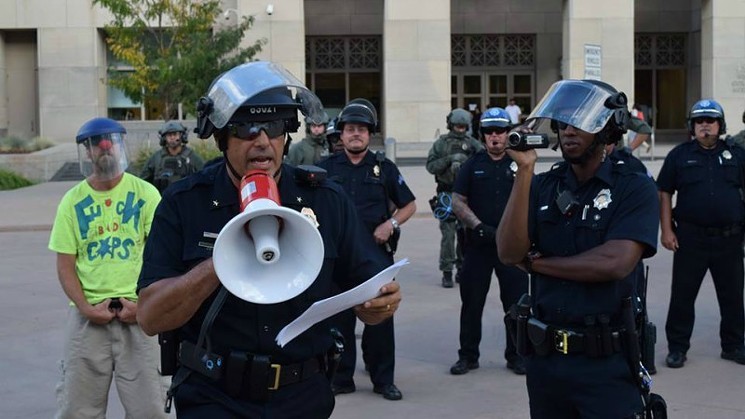 A "Fuck Bad Cops" demonstration in Denver circa 2017.
Facebook
Here's the dialogue between Morgan and Dickey, as laid out in the lawsuit.

Morgan: "Why are you chasing him?"

Dickey: "For trespassing and disorderly conduct."

Morgan: "It's not disorderly conduct."

Dickey: "When he's in front of the building yelling, 'Fuck everybody....'"

Morgan: "That's not — it's public property. Freedom of speech. Relax."

Dickey: "He refused to give his ID...which he's required to do."

Dickey: "So I can issue him a citation for trespassing."

Morgan: "It's not trespassing." 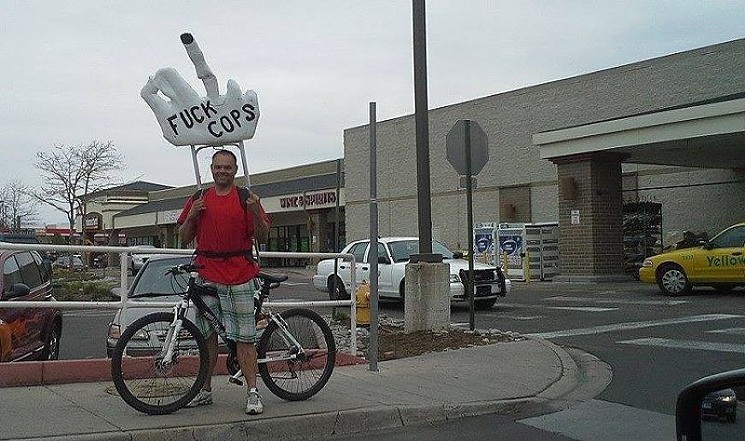 Eric Brandt with his giant hand display.
File photo
The conversation didn't end there, but at that point, Dickey turned off the audio on his body camera "so we can't hear him getting chewed out," Lane noted.

In discussing the settlement, Lane points to assorted violations of Condiotti-Wade's constitutional rights. "In order for a police officer to demand an ID, you have to have a reasonable suspicion that there has been a crime. But there wasn't a crime, because no one had trespassed. So this is all about free speech."

Not that the remarks were free for Commerce City. Indeed, they proved to be quite expensive. "Well, you know, $175,000 here or there may send a message," Lane says. "And at least the commander knew the law. So that's progress."

Click to read Joshua Condiotti-Wade v. Commerce City, Colorado, et al.
KEEP WESTWORD FREE... Since we started Westword, it has been defined as the free, independent voice of Denver, and we'd like to keep it that way. With local media under siege, it's more important than ever for us to rally support behind funding our local journalism. You can help by participating in our "I Support" program, allowing us to keep offering readers access to our incisive coverage of local news, food and culture with no paywalls.
Make a one-time donation today for as little as $1.