Boebert Watch: Lauren Boebert and the Multiverse of Misinformation 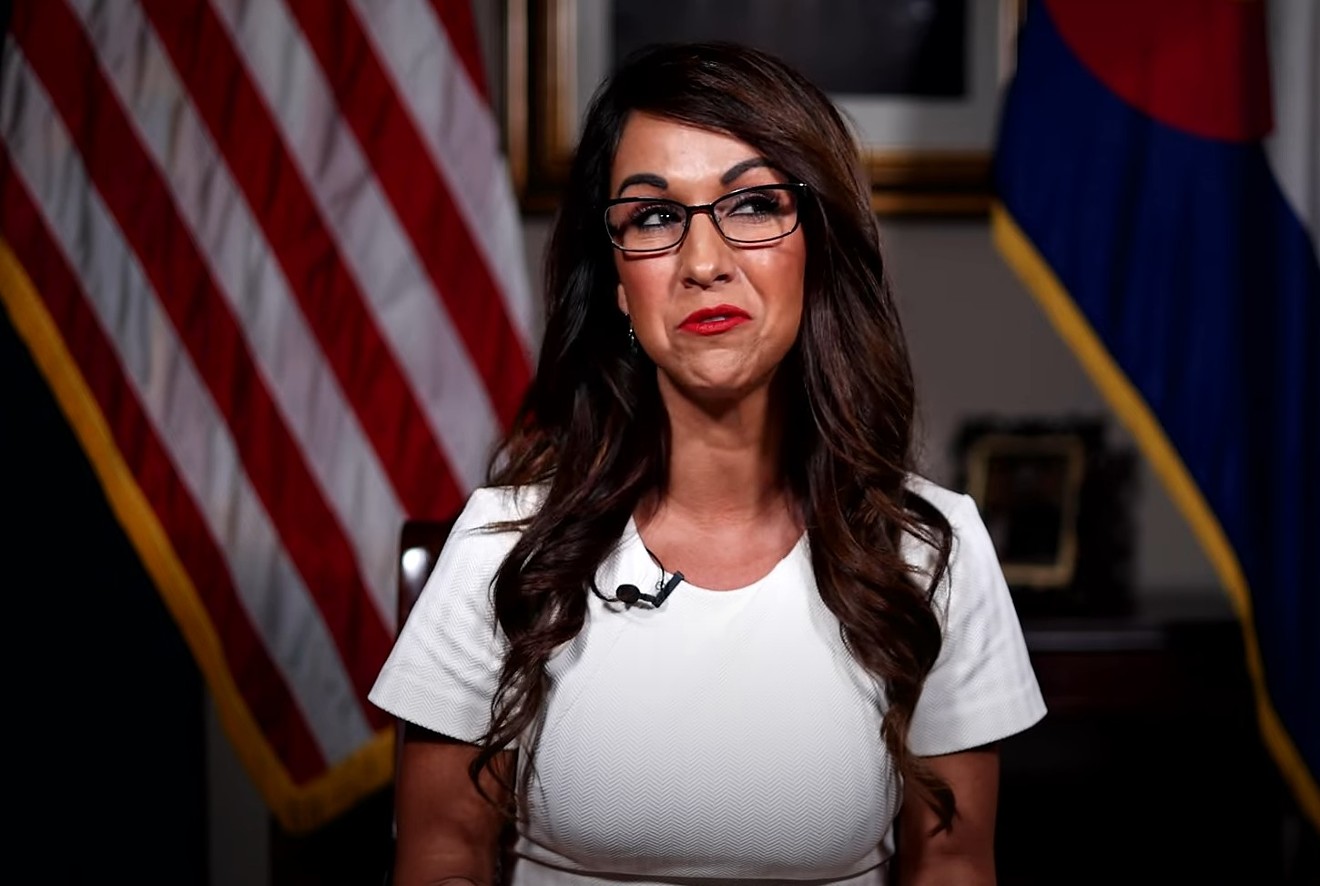 Lauren Boebert would like to invite you to keep buying her utter crap. YouTube
There’s a reason that Representative Lauren Boebert so vociferously defended her right to disinform the public in fighting Homeland Security’s attempt to limit the lies spread on social media: because it’s her entire act. Take away abject dishonesty from Boebert’s bag of political tricks, and what have you got? A poorly educated, gun-obsessed failure of a small-business owner who won’t stop yelling, even after her microphone is cut off.

Case in point: Boebert’s August 11 screed on "Holding Biden's Department of Justice Accountable," which so stretches the limits of rational credulity that it veers into a McCarthy-istic pseudo-world. It’s Lauren Boebert’s Multiverse of Madness, these misty half-worlds of bizarre what-if scenarios treated as though they’re reality. It’s a house of cards that will eventually come crashing down, much as it did for the ass-pimple-that-dreamt-of-being-Rush-Limbaugh Alex Jones this past week. To paraphrase Abraham Lincoln — who recently announced from his grave that he, too, was leaving the Republican Party — a philosophy divided against itself cannot stand. Or, in more modern terms: Bullshit can sometimes win an argument, but it will also eventually bury you.

There are many ridiculous things we could spotlight in this long and terrible missive from  Boebert, but we'll highlight ten of our favorites, including a few that just need to be clarified for those of us still living in the real world.

The Biden administration’s decision to weaponize the FBI and raid President Trump’s home under the guise of a frivolous document preservation scheme is unAmerican and dangerous. It is so outrageous that it makes Watergate — where federal agents also raided a political rival’s office — look small in comparison.

This is the opening paragraph of Boebert’s piece, and wow, what a load. From the vituperative language to the accusations no longer even veiled, it’s all manufactured outrage. Or rather, outrage aimed in the wrong direction. The U. S. Attorney General’s decision to take action at Mar-a-Lago was absolutely and carefully by the book, because everyone concerned knew that the reaction from the far right would be exactly what it's turned out to be. It’s easy to point at the “but her emails!” hypocrisy, sure — these are the same folks who wanted to “lock her up” for far less, and were huge proponents of the FBI when it suited their political purpose. But what’s truly “unAmerican and dangerous” is referring to potential violations of the Espionage Act as “frivolous.” This is a former president with an established record of being sympathetic, at the very least, to an antagonistic foreign power. Trump has been Putin’s pocket pussy for the last six years-plus. It’s not “frivolous” to think that perhaps those documents with which he illegally absconded might somehow find their way into the wrong hands. And really, the GOP needs to stop using Watergate as a comparison, since a direct line can be drawn from the assholes who thought that corruption was defensible to those in charge of the corruption currently being imposed on America — despite all the Fox News folks who apparently want to bend over and say, “Yes sir, may I have another?”

It’s not even that this is an illogical syllogism — Trump did take documents that he wasn’t supposed to (on top of any number of other crimes, it bears mentioning), and Representative Scott Perry was apparently instrumental in the plan to overturn the 2020 election, as documented in recovered texts between Perry and Mark Meadows. Perry is also among those who sought a preemptive pardon from Trump, according to testimony from former White House aide Cassidy Hutchison. So the comparison is less than apt. A more precise one would go something like this: “If they can come after President Trump and Congressman Perry, then they can come after anyone who blatantly breaks federal law and engages in a coup attempt against the legitimate government of the United States of America.” To which every American should say: Yes, dumbass. Duh.

Poll: Has Biden's Department of Justice been politicized?

Peppered throughout Boebert’s missives are classic push polls where you’re presented with a false and often stupid selection of options. Here, the first proposed response is “Yes, I am worried for our country,” which means “I watch Fox, and I’m outraged and don’t know why, and can someone explain to me what a TikTok is?” The second is “No, I support the FBI targetting Biden's political opponents,” which means “I don’t know how to spell ‘targeting’ and no one will select this, anyway.” And the last (because there has to be a third option?) is “Unsure,” which means “I don’t really know what’s going on in the world, but alt-right media has trained me to fight for my right to hold a nonsensical and completely unsupported view of the world. ‘Merica!”

All three of these choices accomplish the same thing: to put the submitter on the email lists of Lauren Boebert.

THE INFLATION EXPANSION ACT: Instead of trying to cut spending and curb inflation, Democrats want to pass $350 billion in Green New Deal spending while doubling the size of the IRS by hiring 87,000 new IRS agents. Here’s a picture of what 87,000 people looks like [uncredited photo of a Nebraska Cornhuskers football game]. How can you tell this isn't the photo Boebert's staff used in the press release? Because this one is properly cited.
YouTube
Okay, aside from the complete lack of audience awareness inherent in a Colorado congresswoman using a sea-of-red image from a Nebraska football game, there’s a lot of more important utter crap here. The “Inflation Expansion Act” Boebert so cleverly re-names is actually called the Inflation Reduction Act — that flip is the sort of comeback that wouldn’t be received well in a middle-school lunchroom. More important, Boebert name-drops the “Green New Deal,” which supporters of the GND will tell you this act is very much not, even if it's a good start in the right direction for anyone concerned with the Earth’s rapidly changing climate. And the 87K in new IRS agents? A complete fabrication cut from the whole cloth of GOP scare tactics, already widely debunked but still in play in the small minds of people like Lauren Boebert. Much like the GOP’s vaunted “Death Panels” back in 2009, and Trump’s terrifying caravans full of terrorists from the Middle East in 2019, this untrue fear-mongering is meant to panic people and then disappear. It’s another element of the current Republican Party that has abandoned all sense of effective governing in favor of rampant con-artistry.

Translation: Colorado Senators Michael Bennet and John Hickenlooper are absolutely right in having first introduced this bill, so I’m going to co-opt it and crow about bipartisanship while not giving them any nominal credit whatsoever.

This year, the U.S. Forest Service and Governor Polis suddenly announced that Sweetwater Lake will become a new state park. I am concerned that local elected officials and key stakeholders were not consulted during the decision-making process.

Note the not-so-subtle use of the word “suddenly,” which is meant to indicate that some sketchy backroom deal has gone on. But no, the acquisition of Sweetwater Lake has been long in the making, from years-long approval from Colorado’s congressional delegation for its purchase to an agreement signed by Governor Jared Polis in 2019 between the National Forest Service and the Colorado Department of Wildlife to the announcement of this specific deal in October 2021. It was in no way “sudden,” except perhaps to someone like Lauren Boebert, who wasn’t paying attention. 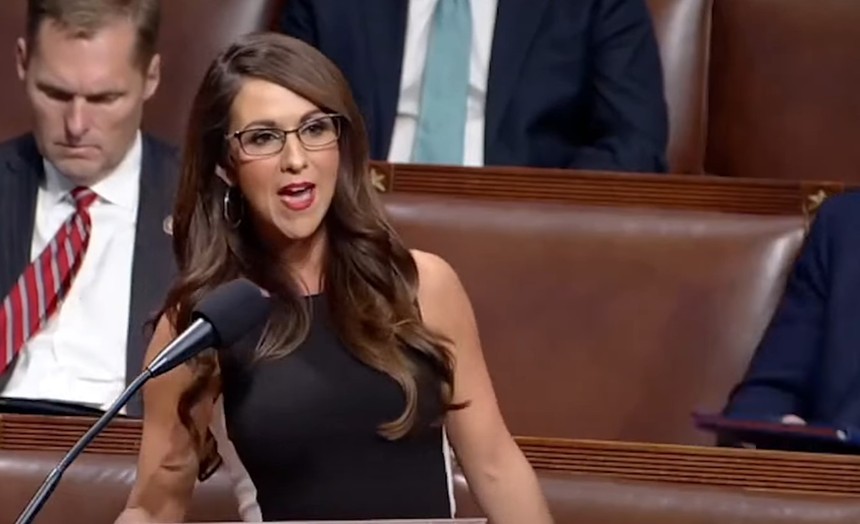 Representative Boebert on August 12, right before her mic was cut off for not following the House Rules of Order, by which was meant shutting the fuck up.
YouTube
“The Internal Revenue Service bought nearly $700K in ammunition earlier this year which begs the questions, why do their agents need guns to do their job and who are the IRS arming their agents against?”

This is Lauren Boebert quoting Lauren Boebert, which is one of the only ways Lauren Boebert will ever become quote-worthy, so good job? She “wrote” an article for Breitbart about something that was supposed to be a gotcha sort of moment worthy of a bit on Fox & Friends once Brian Kilmeade was done pretending obvious Photoshop memes were real news. But the real question is this: Why are we surprised that a government agency with government-issued firearms requires the same amount of ammo expenditure this year as it has in years past? It's a non-story, true but meaningless. The IRS spent $1.1 million on ammo in 2011, according to the Government Accountability Office. Maybe this is just Boebert trying to express a moderate position on guns, and even an incorrect and nonsensical one is better than nothing?

Well, winning GOP primaries, when it’s happening, which it notably isn’t in any consistent manner. More important, they’re beating other Republicans with a dispirited base of voters who (admirably) can’t support Trump policies, and see their party of choice trampled by autocratic grift. That’s not the same thing as “winning.”

“‘Any member of Congress, from freshmen to those in leadership, who won’t fight with me to end medical tyranny, secure the southern border and fire Anthony Fauci, they will not have my support. Not in their re-election and certainly not for speaker.”

Not that anyone’s really beating down Boebert’s door for an endorsement at this point. But please, Representative, by all means, expand on what you mean by “medical tyranny,” especially as it pertains to the abolition of abortion rights. Or does it just boil down to “vaccines bad; forced births good”?

My office exists to serve you.

But just her office. Lauren Boebert is too busy furiously chasing the spotlight.
KEEP WESTWORD FREE... Since we started Westword, it has been defined as the free, independent voice of Denver, and we'd like to keep it that way. With local media under siege, it's more important than ever for us to rally support behind funding our local journalism. You can help by participating in our "I Support" program, allowing us to keep offering readers access to our incisive coverage of local news, food and culture with no paywalls.
Make a one-time donation today for as little as $1.