COVID-19: Call for Closing Speer, Other Denver Streets to Cars 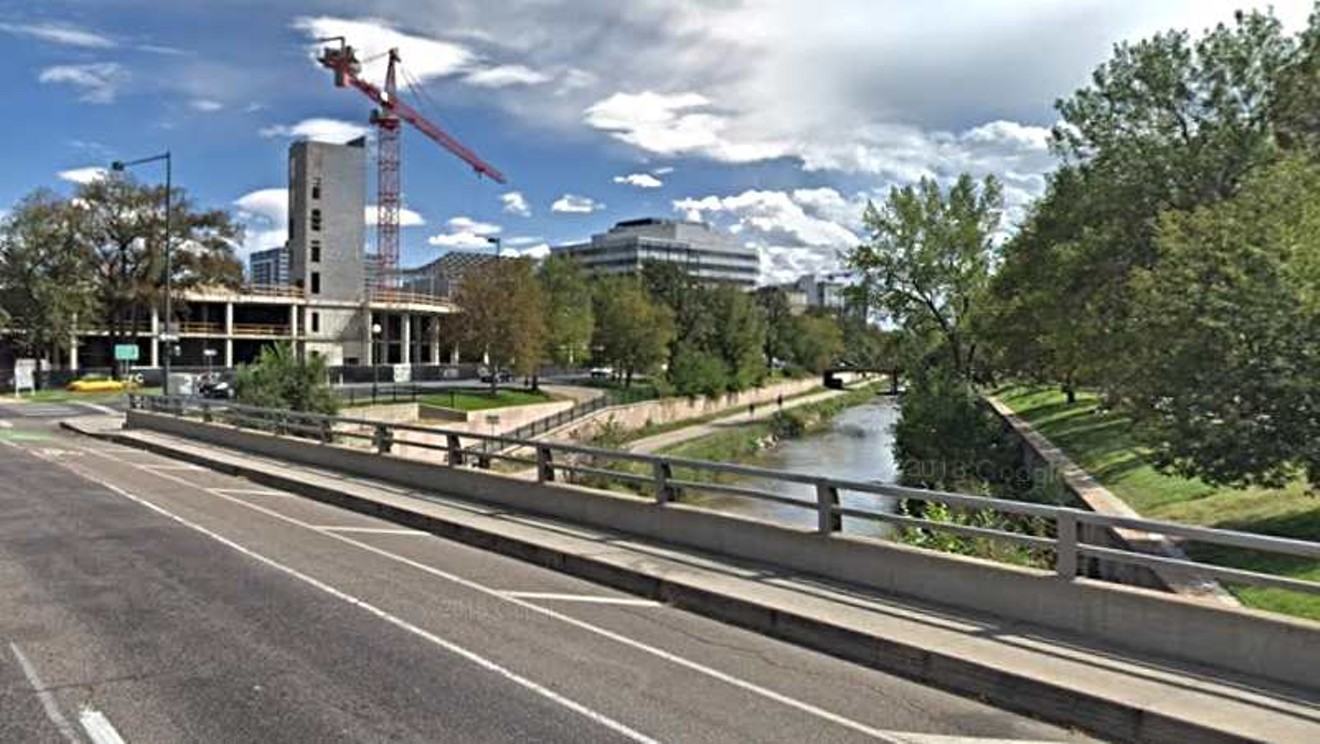 The Cherry Creek bike path as seen from Speer Boulevard near 14th Avenue. Google Maps
On March 23, when Denver Mayor Michael Hancock issued a stay-at-home order that went into effect at 5 p.m. March 24 to address the COVID-19 outbreak, he specifically mentioned people spotted the previous two days at crowded public places such as City Park and Washington Park, many of whom were not following social-distancing recommendations while walking, running or cycling.

These parks remain open, but the folks at the Denver Streets Partnership, which describes itself as a "coalition of community organizations advocating for people-friendly streets in Denver," fear that there simply isn't enough room to allow everyone wanting out of the house to maintain six-feet-or-more gaps between them. To that end, the DSP is calling on Hancock to consider converting select Denver streets to "social distancing-compliant open spaces," and is conducting a survey to get input from the public about which stretches should be made temporarily off-limits to cars, so that pedestrians, cyclists and the like can better spread out.

One strong candidate: a portion of heavily used Speer Boulevard.

"The idea has been floated before that you could take half of Speer and turn it into a greenway to provide extra space," says Denver Streets Partnership Executive Director Jill Locantore. "And it runs parallel to the Cherry Creek bike trail, which is very popular even during normal times — and it's been even more so during the current crisis."

The need for such a move is clear, she believes: "Even with the stay-at-home order from the mayor, the city is still recommending getting outdoors and being physically active. It's been designated an essential activity, and we would agree with that for both our physical and mental health, particularly at times of stress. And the guidance is that walking and biking are totally acceptable activities as long as you can maintain a safe distance. But over the weekend, we saw people challenged to find places to walk and bike that allowed safe social distancing — and we've seen other cities closing streets to cars, allowing people to get out and be physically active without risking spreading the disease."

A map of the 5280 Trail, also known as the 5280 Loop.
downtowndenver.com
Locantore cites "Bogotá, in Colombia, which has been one of the most progressive on transportation issues. They've added protected bike lanes and car-free streets. New York City is looking into it right now; the governor of New York [Andrew Cuomo] has directed the mayor of New York City [Bill de Blasio] to come up with a plan to find safe spaces for people to walk and bike outdoors. Mexico City is also looking at adding protected bike lanes. So this is a need not just in Denver, but in cities across the United States and the world. We want people to be physically active, especially in denser neighborhoods, where you may not have a back yard but you still need to be able to get outside."

The Denver Streets Partnership has been working with the Downtown Denver Partnership to come up with ideas about how to facilitate such activity, and Locantore thinks that some of the most obvious prospects "are streets within parks, like City Park, Washington Park and Sloan's Lake Park. Those streets have space that are lightly used by vehicles. And there's also the 5280 Trail, which has low-traffic streets identified by the Downtown Denver Partnership and the city that connect neighborhoods downtown and are good walking and biking streets more so than driving streets. This is a good opportunity to go ahead and designate them that way, at least temporarily."

Her group's survey poses 21 questions that go beyond whether streets should be closed to car traffic in order to make biking and walking easier. Another key topic is "mobility and, particularly, transit," Locantore points out. "We know many people are dependent on transit, including a lot of people considered essential: workers at grocery stores and in the medical field. That's how they get to and from work. So we want to know how people are using transit, how safe they feel, and what policies might make them more safe continuing to use that as an essential mode of transportation."

(Note that at its March 24 board meeting, RTD voted to approve significant cuts to bus and rail service starting April 19, amid big ridership declines.)

The survey will be open for another week or so, and "we've already gotten a pretty robust response," Locantore says. "I think the need for better public spaces is urgent, so we want to get as much response as quickly as we can and share that with city leaders as they consider how to create those safe public spaces."

Click to take the Denver Streets Partnership survey on walking, biking and transit during COVID-19.
KEEP WESTWORD FREE... Since we started Westword, it has been defined as the free, independent voice of Denver, and we'd like to keep it that way. With local media under siege, it's more important than ever for us to rally support behind funding our local journalism. You can help by participating in our "I Support" program, allowing us to keep offering readers access to our incisive coverage of local news, food and culture with no paywalls.
Make a one-time donation today for as little as $1.