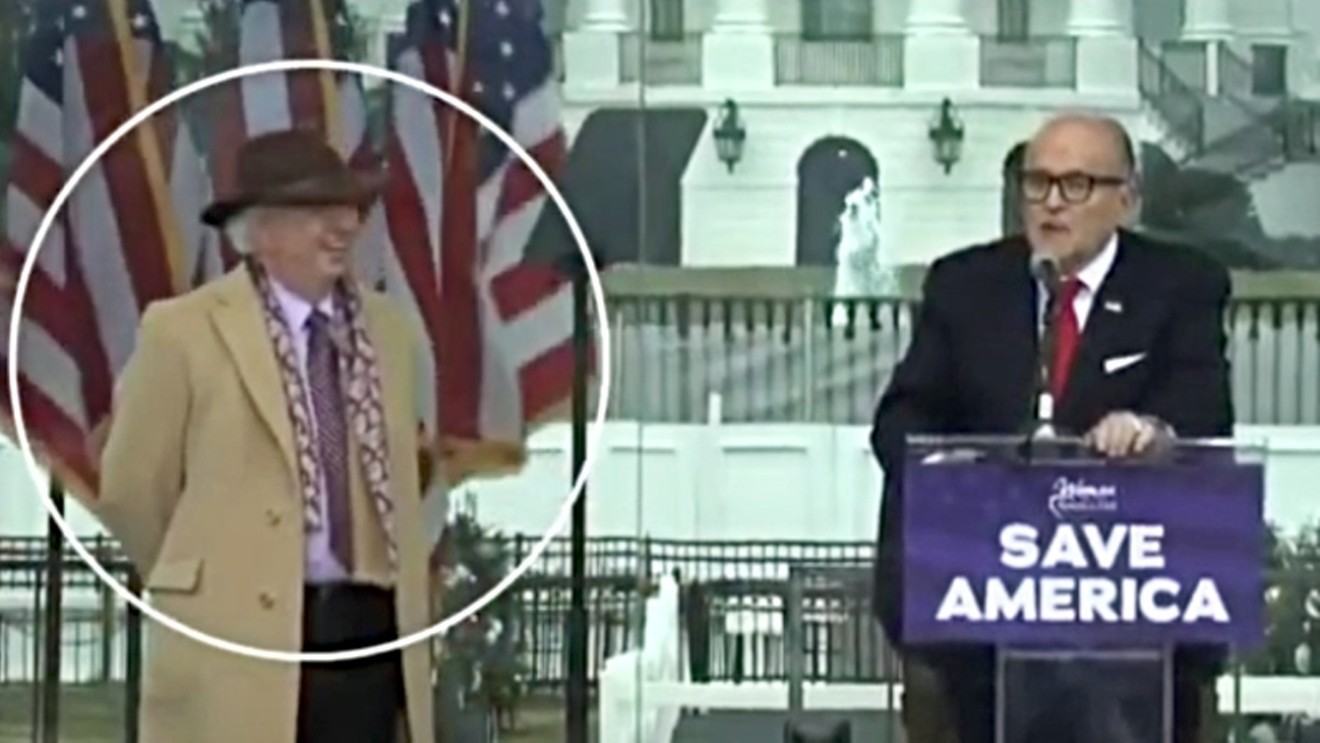 Professor John Eastman, circled, being touted by Trump advisor Rudy Giuliani at a rally prior to the January 6 attack on the U.S. Capitol. CBS Los Angeles via YouTube
The University of Colorado was just blasted by the Colorado Latino Leadership, Advocacy & Research Organization for using a "rigged" process to justify naming interim president Todd Saliman as the sole finalist to fill the position long-term.

That's not the only controversy looming for the state's largest higher-ed institution. New Era Colorado, which describes itself as "the leading voice for young people in Colorado politics," has launched a campaign, complete with online petition, to pressure administrators to shut down the Bruce D. Benson Center for the Study of Western Civilization, a privately funded branch of CU Boulder that was launched in the early 2000s as a way to add conservative voices at the famously liberal institution.

Since 2013, the Benson Center has hosted visiting scholars focused on study and instruction with a decidedly rightward slant — but the 2020-2021 invitee, attorney John Eastman, has been by far the most controversial. He's been tagged as the central intellectual strategist in the effort by supporters of former president Donald Trump to deny the results of the 2020 presidential election, as well as a conspirator in the January 6, 2021, attack on the U.S. Capitol. Eastman spoke at the rally prior to that action, and new information about his role continues to surface as a congressional committee continues its investigation.

Although Eastman's page still lingers on the CU website, the university has spent more than a year trying to distance itself from his actions. He was bounced by CU on January 22, 2021, after university officials "determined Eastman’s continued pursuit of these duties would likely be disruptive and damage the interests of the campus and the Benson Center," according to a statement issued that day. Eastman has threatened a lawsuit over his dismissal, but no complaint has yet been filed.

The New Era petition portrays Eastman as a symbol of everything that's wrong with the Benson Center. After contending that the center "promotes white supremacy culture," it argues that "the annual appointment of visiting scholars who frequently champion harmful language and actions — including attending the January 6 insurrection" has "debased the standards of this institution." It continues: "John Eastman's direct and personal role in the near-destruction of American democracy while serving as the Benson Center's visiting scholar has exposed the broken reasoning at the heart of the Center's existence. This goes against the values of CU students, faculty, staff, alumni, and community members. Harmful and destructive white supremacist and insurrectionist teachings have no place on CU's campus."

Hayley Banyai-Becker, New Era's organizing program manager, underscores these points. "During his tenure as a visiting scholar, he was the principal architect of attempts to overturn the presidential election — and he did this while he was on the CU payroll," she says. "We believe in having an open mind, but certain things should never be up for debate, including the results of a free and fair election and the impact on marginalized communities. That's one of the reasons we feel the center has done more harm than good."

CU spokesperson Andrew Sorensen pushes back on this conclusion. "The Benson Center plays a valuable role in fostering a wider consideration of various perspectives, and CU Boulder expects that it will continue to do so," he says.

"The center regularly hosts bipartisan events with academics, thought leaders and policymakers on important topics," Sorensen adds, offering as examples "Is Civil Discourse Dead?," a conversation with conservative scholar Robert George and progressive author and activist Cornell West that took place on January 21, 2021, shortly after the actions of January 6, and a discussion about bipartisan climate solutions on April 14 that included U.S. Representative Joe Neguse, a Democrat, and Utah Congressman John Curtis, a Republican.

As for Eastman, Sorensen notes that "Chancellor [Phil] DiStefano made his views clear on January 7, 2021," when he wrote that "Professor Eastman’s conduct does not reflect the values of our university. He has embarrassed our institution. CU Boulder is committed to the free exchange of ideas and the pursuit of knowledge, and Professor Eastman has contributed nothing of value to support the ideals of either the Benson Center or CU Boulder."

These remarks don't satisfy New Era. According to Banyai-Becker, representatives of the organization have been meeting with campus and community groups in the hope of building a coalition capable of making CU think twice about the wisdom of keeping the Benson Center up and running. "We're definitely keeping the pressure on until we reach our goal," she says. "I'm an alumni, and we value a free and fair democratic process and an environment where everyone has the ability to learn and grow without fear of oppression. The Benson Center goes against those values, and that's why I firmly believe it needs to be closed."
KEEP WESTWORD FREE... Since we started Westword, it has been defined as the free, independent voice of Denver, and we'd like to keep it that way. With local media under siege, it's more important than ever for us to rally support behind funding our local journalism. You can help by participating in our "I Support" program, allowing us to keep offering readers access to our incisive coverage of local news, food and culture with no paywalls.
Make a one-time donation today for as little as $1.