David Mueller in his new guise as Stonewall Jackson and Taylor Swift at the Pepsi Center concert where she says the former KYGO host groped her. DeltaRadio.net/Eric Gruneisen
At this writing, former Denver disc jockey David Mueller, who singer Taylor Swift said "grabbed my bare ass" at a Pepsi Center concert in 2013, is on the air at his new station, KIX 92.7 in Greenwood, Mississippi, and trying his damnedest to dodge controversy. During the portions of the broadcast we heard, Mueller, referring to himself simply as Jackson (and not Stonewall Jackson, as has been widely reported), studiously avoided any mention of the angry pop star looming over his career while hosting one of the most awkward and boring shows in the history of radio.

It's the latest twist in a bizarre saga that's still not over despite legal battles that dragged on for years before they hit a Denver courtroom last year.

As we reported in our first post on the topic, published in September 2015, Mueller filed a lawsuit blaming Swift, her mom and numerous employees for getting him fired at Denver country powerhouse KYGO in 2013 after falsely claiming that he'd put his hand on her posterior.

As noted in the document, Mueller had more than two decades of experience in the radio industry, working at stations in San Diego, Kansas City, Minneapolis and Columbus, Ohio, before landing at KYGO circa January 2013 — and as part of these gigs, he took part in publicity-generating grip-and-grins with a slew of celebs.

Specifically cited were Sheryl Crow, Gwen Stefani, Britney Spears, Christina Aguilera, Heidi Klum, Fergie, Mariah Carey, Beyoncé, Jessica Simpson and Jennifer Lopez. Presumably, the all-female list was included to stress that he'd previously been in close proximity to some of the most famous booties on the planet and had never been accused of digging his fingers into any of them.

Cut to May 30, 2013, when KYGO program director Eddie Haskell informed Mueller that he and his on-air partner, Ryan Kliesch, better known as Ryno, would be meeting and greeting Swift at the Pepsi Center prior to her June 2 Pepsi Center concert.

Approved to accompany them were Mueller's girlfriend and co-worker, Shannon Melcher, and Ryno's wife, Alycia.

When Mueller and Melcher arrived at the arena, the suit continued, the Kliesches and Haskell were already backstage. The two were led to a curtained-off area, where they waited for Swift along with fans who'd won a contest to bask in the songstress's presence. 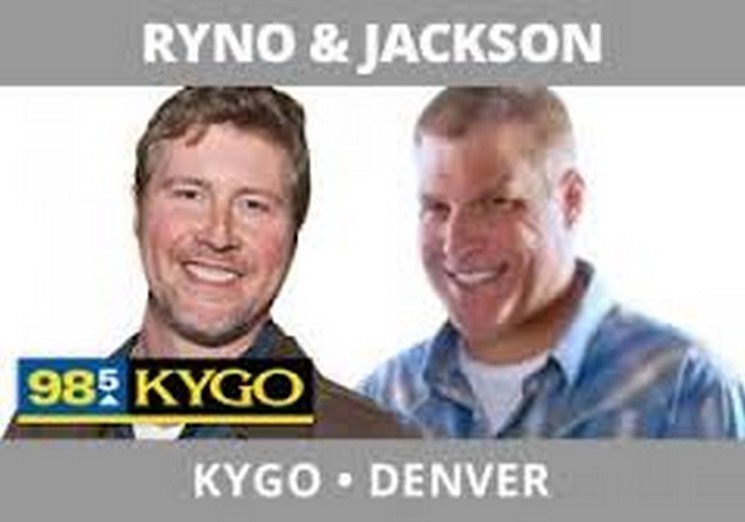 Mueller, aka Jackson, with former partner Ryno during his KYGO days.
AllAccessRadio.com file photo
During their turn with Swift, Mueller is said to have "complimented Ms. Swift on her patience and sincerity with her fans," while Melcher told her that "she had enjoyed watching the little girls dance and sing while waiting in line," and that Swift was a great role model.

"Ms. Swift then complimented Ms. Melcher on the belt she was wearing," the suit went on.

Mueller was standing a few feet from Swift at that point, but when the singer and Melcher began posing for a pic, he "jumped into the photograph at the last second," the complaint states. Afterward, "Ms. Swift cordially thanked Mr. Mueller and Ms. Melcher for their visit. Ms. Swift gave Ms. Melcher a hug and shook Mr. Mueller's hand." As they departed, one of her minions handed them autographed Taylor head shots and a code to download the photo from Swift's website.

Afterward, Mueller ran into Haskell, who allegedly told him that when Swift had seen him earlier, she'd yelled out, "Eddie!" and given him a hug that he'd reciprocated by putting his "hands on her bottom," the lawsuit states. The document added that Haskell "explained that he and one of his friends in the industry think Ms. Swift must wear bicycle shorts under her stage outfits."

At first, this passage seemed like a non sequitur — but not for long.

A short time later, a member of Swift's security team identified as Craig came up to Mueller and asked, "Do you want to tell me what happened earlier tonight?" — and after Mueller said he didn't know what he meant, the staffer "accused Mr. Mueller of grabbing Ms. Swift's bottom while he and Ms. Melcher were being photographed with Ms. Swift." Mueller immediately denied any wrongdoing, and Melcher also defended him, the suit said. Additionally, Mueller was quoted as recommending that Craig contact the police and Haskell — requests that were allegedly ignored.

Instead, "security personnel and other members of Ms. Swift's staff surrounded Mr. Mueller and Ms. Melcher, verbally abused them, and told them that Ms. Swift did not want them to attend her concert," after which the pair were escorted out of the building.

Later, Frank Bell, a member of Swift's management team, showed Haskell the photo taken earlier and asked him to identify Mueller. Once Haskell did, Bell was quoted as announcing that Mueller and Melcher were banned for life from Swift concerts and declaring that the incident reflected poorly on KYGO.

Haskell subsequently left Mueller a voicemail saying the DJ wouldn't appear on the air the following Monday pending a radio-station investigation of the incident. The suit also maintained that Haskell was contacted by Scott Borchetta, president of Swift's label, Big Machine. Amid complaints about the situation, Borchetta allegedly said that Swift's mother "was livid."

The next morning, June 3, Bell called KYGO's general manager, Bob Call. An excerpt from this part of the suit reads:


Mr. Bell repeated Ms. Swift's charge of inappropriate physical contact by Mr. Mueller, specifically that Mr. Mueller had lifted Ms. Swift's skirt with his hand and grabbed her bottom. Mr. Bell told Mr. Call that Ms. Swift, her parents, and her staff were very upset. Mr. Bell threatened KYGO "could be gravely impacted" by the incident. Mr. Bell indicated he would forward the subject photograph to Mr. Call and commented that the photo would be "damning."

The pic in question was later leaked, and as you can see, it shows Mueller's hand directly behind Swift — though it's unclear exactly what it's doing back there: 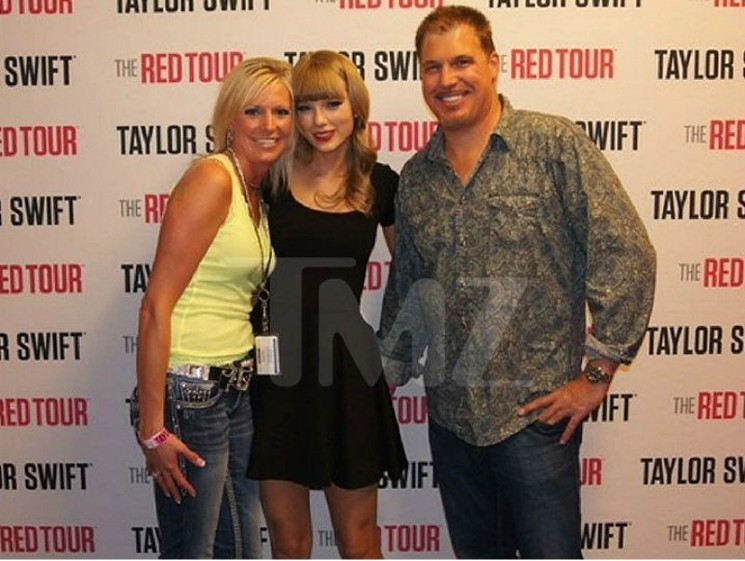 TMZ file photo
In October 2015, Swift countersued Mueller, setting up legal jockeying for position that continued through the August 2017 trial, at which the vocalist was awarded the full amount of money she sought: $1.

That December, Swift told Time magazine that Mueller never paid her the dollar. He promptly denied that, maintaining that he'd sent her the $1 in the form of a Sacagawea coin in what the AP described as "a final jab at the singer in a case her side called a win for all women."

All was quiet on the Mueller front for more than a month — but then word surfaced that he'd been hired at KIX in a duel capacity explained in this item shared by Delta Radio, the Mississippi outlet's owner:

Jackson is the host of KIX-92.7's "Jackson & Jonbob" morning show and is also an ace marketing consultant. Need help generating more business for your business? Call Jackson for instant action. He can be reached at 662-743-0400, ext. 705.

Delta Radio CEO Larry Fuss explained his decision to hire Mueller to the New York Daily News. "I sat down with him face-to-face in Minneapolis before I offered him the job and talked to him about it," Fuss said. "He's either the world's best liar, or he's telling the truth. I tend to believe his version of the story, and most people who have talked to him face-to-face do believe his version of the story."

Fuss also shrugged off signs of a backlash that was already gathering steam. "Most of the response I have seen this morning — there's been quite a few on our Facebook page, and none of it is radio people, none of it is local people in Mississippi. It's all originating from some Taylor Swift fan group somewhere. They're telling people to go to this station's web page and post negative comments."

He added, "It’s just people who don’t have a clue, or don’t really have any knowledge of the facts. ... Most of them need to get a life."

The aforementioned Facebook page has been scrubbed of all complaints and even any reference to the new program. Likewise, the KIX website currently mentions only "The Hometown Morning Show...Coming Soon."

In truth, the show is already here, and it's incredibly underwhelming. Mueller/Jackson seems to have zero chemistry with his co-host, JonBob, and comedy bits like one in which he talked about a peacock riding on a plane, complete with pre-recorded squawks, were flat-out lame. So, too, was the shorthand for the dial-in number listeners wanting to reach the morning show could use: 662-271-LARD.

Wonder how many Taylor Swift fans are dialing those digits right now — and what kinds of requests they're making. Click to listen live.