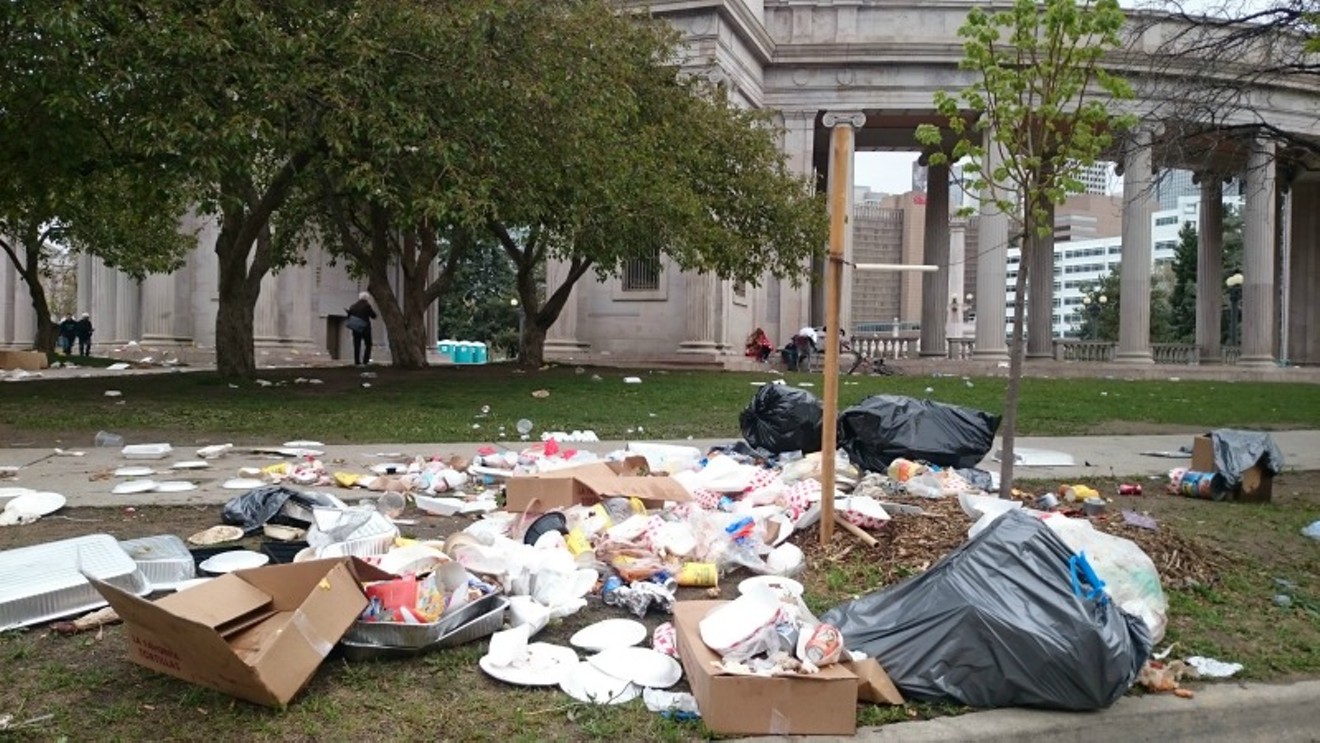 Some of the trash at Civic Center Park the morning after the Denver 420 Rally. Photo by Michael Roberts
The morning after the 2017 version of the Denver 420 Rally, Civic Center Park was still a mess, and angry residents were phoning local TV stations with complaints. But as noted by Miguel Lopez, wearing a yellow hoodie that accurately identified him as "Chief Event Organizer" for the rally, his permit allows him until noon the next day to fully clean up the area.

Lopez was confident he'd still be able to make that deadline despite delays caused after the festival was over by a man with a knife who'd slashed open garbage bags and scattered trash that had already been collected.

When I visited the park between 9:30 and 10 a.m. on April 21, Lopez was wielding a push broom, and he wasn't the only one. At least a dozen helpers, including some from the local homeless population offered $5 for each filled bag, were hard at work trying to return the park to its condition before the rally, and more volunteers were arriving.

Granted, quite a few others were less than pleased by some aspects of the rally, which took place during a persistent rain that lasted throughout the afternoon on April 20. The loudest gripes came from people who stood in line for hours in order to get past the main security checkpoint, located on the south end of the park just off Broadway. There, two members of the security staff armed with metal-detecting wands struggled to process thousands of revelers attending the free event, resulting in wait times that exceeded an hour — before the fence was broken down.

Miguel Lopez aiding in the cleanup efforts.
Photo by Michael Roberts
Most attendees thought the aforementioned entry point was the only way to get into the park, but Lopez says there were two others — located on the north and south at the opposite side of the area — that far fewer people found. He explains that he wasn't allowed to place another one along Broadway for fear that the crowds would wind up in traffic.

Otherwise, though, Lopez defends the plan. Given that people show up two hours early to fly out of Denver International Airport, he said, late arrivers to a huge event like the Denver 420 Rally should have shown up earlier and expected that the process would take a while.

He expresses far more frustration in regard to the knife-wielding man, who he says created a huge mess and then responded to Lopez's request that he stop what he was doing with the words "Fuck you, spic."

At that point, Lopez phoned the police; he checked his phone to confirm that the call was placed at 10:36 p.m. But even though Denver Police Department personnel weren't shy about dealing with the offenders, citing 32 people for public marijuana consumption and either conducting arrests or issuing tickets in sixteen other instances, he maintains that the officer who responded in this case seemed disinterested in dealing with the matter.

One of the volunteers helping with the cleanup.
Photo by Michael Roberts
According to Lopez, he requested that the man be arrested, but the officer kept asking others if this was really necessary — and when someone said it wasn't, he split without taking the suspect into custody. Lopez adds that he plans to formally complain about the situation.

This disruption in the effort to restore the park was a setback, Lopez acknowledges, but he stresses that it's commonplace for tidying up to continue through the next morning — and because the city isn't responsible for the cost of doing so, he appreciates any and all assistance he can get.

As I was speaking with Lopez, a man from Orlando who wasn't scheduled to fly back home until later today showed up and offered to help. When the man held up his fist and shouted, "Florida represents!," tears of gratitude filled Lopez's eyes.

"We have such wonderful people in our community," he said — meaning the cannabis community.