A template for the new seven-day notice posted before large cleanups. U.S. District Court
A settlement has been reached in a class-action lawsuit that represented every person experiencing homelessness in Denver against the city in federal court. The settlement, which was announced today, February 27, comes just weeks before a jury trial was scheduled to begin to decide whether the city violated constitutional rights, including those covered by the Fourth and Fourteenth amendments (protections against unlawful searches and seizures and equal protection under law, respectively), when it conducted large-scale sweeps of homeless encampments.

The case began in 2016 following a series of large encampment cleanups in the Ballpark neighborhood, during which some people experiencing homelessness claimed that their possessions were trashed or confiscated by police officers and city employees without enough warning or a clear path to retrieve them.

In August that year, civil-rights attorney Jason Flores-Williams ("Ready for Action," December 2016) sued the city to challenge its homeless sweeps on behalf of six plaintiffs. The case made national headlines in April 2017 when District Court Judge William Martinez took the unusual step of granting class certification to every person experiencing homelessness in Denver.

In 2017 and 2018, the case moved slowly through the court before appearing to head toward a “monster trial," as Flores-Williams put it last February, that was scheduled to begin this March. But with the help of attorney Andy McNulty at the civil-rights firm Killmer, Lane & Newman, LLP, negotiations derailed the trial.

In the settlement announced today, Denver has agreed to implement strategies that will change how it conducts cleanups of homeless encampments.

• Posting signs with seven days’ notice prior to large cleanups.
• Posting written notice of regular cleanups, including days and hours and locations, of where those will take place.
• Affixing a 48-hour notice to unattended items rather than removing them (when said items aren’t posing a health and safety risk).
• Having all notices include locations and hours of storage facilities where property taken during a cleanup can be retrieved without fear of arrest.
• Placement of 200 lockers at the Minori Yasui Building Plaza (at the intersection of West Colfax Avenue and Tremont Place, across from the City and County Building).
• Expanding the number of trash cans in the Ballpark neighborhood, along the South Platte River trail and along the Cherry Creek bike trail.
• Creation of an advisory group consisting of people experiencing homelessness who will give feedback to the city on programs and policies every quarter.
• Potential creation of a "mobile health unit" funded by the city.
• Development of a formal notification system for people whose personal property has been removed from public places. 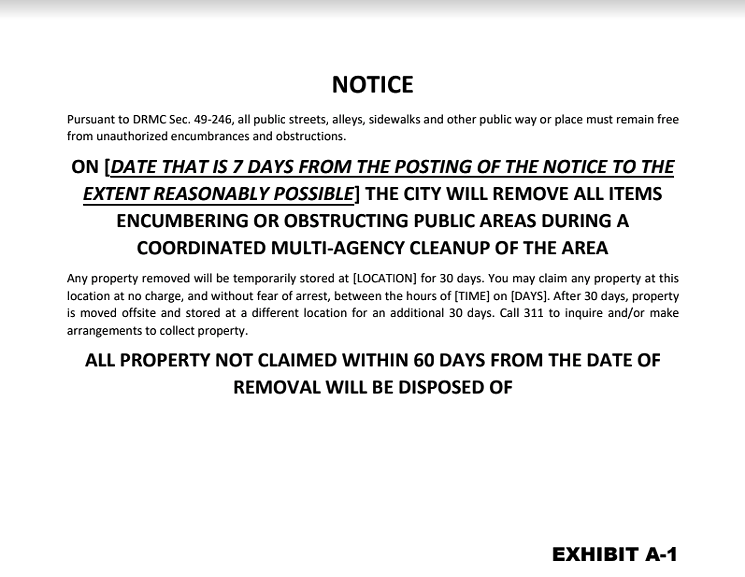 A template for the new seven-day notice posted before large cleanups.
U.S. District Court
Flores-Williams says that the “formal notification system” is still in the works but could include text messages sent to people experiencing homelessness.

In addition to the city’s new policies, the six representative plaintiffs in the case will split $30,000 from the city in damages, pending approval from Denver City Council.

In return, each plaintiff has relinquished rights to sue the city again or hold it accountable for further damages in matters related to the suit or to homeless sweeps.
KEEP WESTWORD FREE... Since we started Westword, it has been defined as the free, independent voice of Denver, and we'd like to keep it that way. With local media under siege, it's more important than ever for us to rally support behind funding our local journalism. You can help by participating in our "I Support" program, allowing us to keep offering readers access to our incisive coverage of local news, food and culture with no paywalls.
Make a one-time donation today for as little as $1.