My First Time at Denver Broncos Training Camp, and It Felt So Good

New quarterback Case Keenum was a popular attraction among autograph-seekers. Photo by Lora Roberts
Although I've been a lifelong fan of the Denver Broncos, I've never before attended the team's training camp, which is free and open to the public. I experienced my first time on Sunday, July 29, and I never could have guessed how good it would feel.

If you're a training-camp virgin, too, use the following as a guide for camp, which runs through August 15. See the complete schedule below and click on this post's top photo to see a slide show of images from Sunday.

The impetus for my inaugural training camp visit was my daughter Lora, whose fandom is exceeded only by her knowledge of the team. That she's not already on the coaching staff is an oversight the Broncos would be wise to rectify at the earliest possible opportunity.

Media coverage from day one of camp, on July 28, focused on the huge throng that came to see the collective in action and bask in the presence of former QB Peyton Manning, who turned up to give his blessing to the 2018-2019 edition. Multiple reports noted that late-arrivers had to be sent away when the facility — officially dubbed the UCHealth Training Center and the Pat Bowlen Fieldhouse — reached capacity. 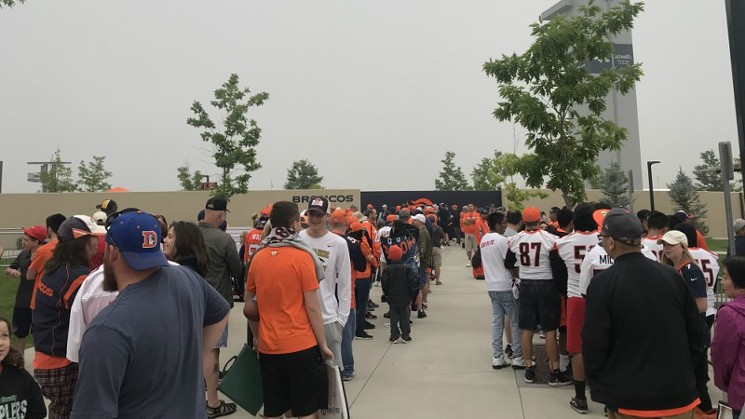 The entry line.
Photo by Lora Roberts
With that in mind, Lora and I arrived absurdly early — just past 6:30 a.m., around half an hour before the parking lot opened. It was the first of our rookie mistakes. Instead of finding a parade of cars lined up to gain entry, we encountered a Broncos Parkway that was nearly deserted, except for multiple police vehicles, bubble lights flashing as officers readied to direct the traffic to come.

We subsequently chatted with a security guard, who told us to return around seven. So we made a quick trip to a nearby King Soopers to pick up some Sharpies, since Lora was hoping to get an autograph from former Super Bowl MVP Von Miller, the biggest star on the Broncos as presently constituted. I figured that was about as likely as Jesus Christ descending from the heavens to sign up for the squad, but I kept it to myself. Why crush her dream when reality would undoubtedly do it for me?

By the time we got back to the lot, cars were settling into their spots, but there weren't nearly as many as we anticipated — and the weather likely had a lot to do with it. The area was covered with a thick layer of fog that made temperatures in the mid-50s feel considerably cooler, especially when breezes struck.

Hence, our second rookie mistake. Lora and I wore short-sleeve Broncos shirts — mine from the Super Bowl 50 season, Lora's a Von jersey — and shorts, with no jackets or blankets for seating comfort on the grassy hillside that serves as the equivalent of bleachers at camp. Given that practice wasn't scheduled to start until 9:30 a.m., we got the thrilling opportunity to freeze our asses off for hours. 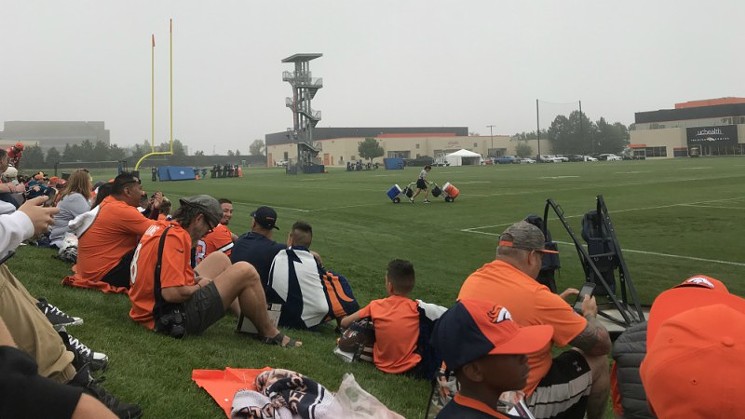 The grounds crew readies the field.
Photo by Lora Roberts
Fortunately, there was plenty to distract us.

While the line lengthened, we were entertained by a gaggle of elementary-school kids doing their own kind of workout under the tutelage of a teenager who kept them sprinting and leaping for passes until they were ready to collapse in a happily exhausted heap. And there were plenty of greetings between folks who obviously see each other at camp every year.

Your Denver Broncos: Bringing people together.

At 8 a.m., the main gate opened and we were ushered to spots on the aforementioned hillside. We wound up in the third row of the righthand field, only feet from the end zone, and when a father and son in front of us decided to relocate, we moved up even closer. The view was as good as it would be from the sidelines at what is temporarily being called Broncos Stadium at Mile High (because no giant corporation has yet ponied up to put its moniker on the side of the edifice).

Defensive lineman Clinton McDonald punishes some tackling dummies.
Photo by Lora Roberts
A few minutes later, music started cranking, beginning with a lousy country song about "going back to Denver." But the mix rapidly improved. Over the course of the next several hours, we heard a lot of Drake talking about how he loves his mama, plus classic rock from Led Zeppelin, Bachman-Turner Overdrive, Metallica and more.

Within an hour or so, players started trickling out of the building on the far side of the field, and as they did, a member of the Broncos staff who must have been a drill sergeant in a previous life delivered us a sharp lecture about dos and don'ts.

His main point of emphasis: Take all the photos you'd like, but video is off-limits — and if we catch you doing it, we'll make you delete the file and give you one warning before escorting you off the property.

We listened carefully and followed his edict to the letter — sort of. Yes, Lora took a couple of videos, but since they were on Snapchat, they're gone by now. The man in charge couldn't have a problem with that, could he?

Offensive lineman Connor McGovern and Max Garcia execute the from-the-knees blocking sled drill as guard Ron Leary looks on.
Photo by Lora Roberts
Once Sergeant Bronco had moved on, a much more benign presence arrived in the form of safety Su'a Cravens, a free-agent acquisition from the Washington Redskins with something of a fierce reputation. But instead of greeting us with a scowl, he played catch with dozens of kids along the front rows, much to their delight.

It was an indicator of the fan-friendliness with which the entire session was conducted.

Over the next thirty minutes, every Bronco except one came out onto the fields. The entire roster, including dozens of players for whom the next few weeks of camp will be their only time in a Denver uniform, were ready for stretching warm-ups when Miller finally emerged. He jogged, danced and hammed it up for several minutes, much to the delight of the whooping masses.

I'm sure he didn't plan things that way. It must have been a coincidence.

Quarterbacks Case Keenum and Paxton Lynch take the field.
Photo by Lora Roberts
The next couple of hours were filled with a series of drills that ran simultaneously, many of them rather bizarre. Offensive linemen were made to attack a blocking sled from their knees, leaping forward like beached dolphins. Special-teamers raced toward a foam pylon standing in for a punt returner as one of their fellows tried to fend them off with arms encased in padded clubs. And defenders of every description flung themselves at another simulated victim, then wrestled him/it atop double-padded mats.

The result was weird, hilarious and awe-inspiring, since our close-up view made it clear just how enormous these humans were.

Meanwhile, on the other side of the field, faux-scrimmages pitted different offensive and defensive units against each other, with quarterbacks Case Keenum, Paxton Lynch and Chad Kelly taking turns at the helm.

Keenum, the off-season's most noteworthy acquisition, was impressive  — a good thing, since the team's fortunes largely rest on his shoulders. The vast majority of his throws were extremely accurate, hitting receivers such as Demaryius Thomas and Emmanuel Sanders in places that made them most likely to add yards per catch and avoid getting crushed by defenders.

The hillside crowd.
Photo by Lora Roberts
The same can't be said for Lynch and Kelly. Both were intermittently erratic, tossing balls in the general vicinity of receivers, but in spots that left them vulnerable to the sort of smackdowns capable of ending careers. It looked likely each will make the team, and that wasn't necessarily reassuring.

As practice wound down, our instructor returned to share the rules of autograph-seeking. Broncos personnel would hold up a yellow rope at the edge of the field, he told us — and we were not to push, shove or otherwise act like idiots while attempting to belly up to it. After that, players who wanted to would stop by and sign items of every description.

Lora had obtained a pennant, which was given away to anyone who agreed to enter his or her email into the Broncos system. It was one of several bargains at camp. For instance, bottles of water that would have cost seven or eight bucks at Mile High Stadium — oops! I meant Broncos Stadium at Mile High — went for a single dollar.

Although a group of kids to our left desperately wanted rookie sensation Bradley Chubb to stop by, he stayed distant despite their shouts of "Chubb! Chubb! Chubb!" But their vocalizing apparently caught the ear of Miller, who walked directly toward our group.

Offensive lineman Menelik Watson works on countering a pass rush.
Photo by Lora Roberts
I would have bet money that Lora was never going to get his scrawl on her pennant. And I would have been wrong. She now has a new prized possession.

As a bonus, Miller's warmth toward the throng was palpable. One kid near us repeatedly called out, "Von — do you remember me? Do you remember me?" In response, Miller said, "Sure I remember you. Did you change your hair?"

The kid was shocked. "I got a haircut," he stammered.

"It looks good," Miller assured him.

The post-practice autograph scrum.
Photo by Lora Roberts
Miller also engaged one little girl in conversation, asking if she had a dog. When she said she did, he asked what kind. "I don't know!" she declared, prompting a hearty chuckle.

After Miller had moved on, Paxton Lynch came into our zone, but Lora sure as hell wasn't going to let his signature spoil Miller's mojo. We headed out shortly thereafter, buzzing about how we'd seen so many Broncos close up and in such a positive light. It made those chilly first few hours more than worth it.

The Denver Broncos' free training camp runs from 9:30 a.m. to noon today, July 30. The rest of the schedule follows:

9:30 a.m. to noon.
KEEP WESTWORD FREE... Since we started Westword, it has been defined as the free, independent voice of Denver, and we'd like to keep it that way. With local media under siege, it's more important than ever for us to rally support behind funding our local journalism. You can help by participating in our "I Support" program, allowing us to keep offering readers access to our incisive coverage of local news, food and culture with no paywalls.
Make a one-time donation today for as little as $1.