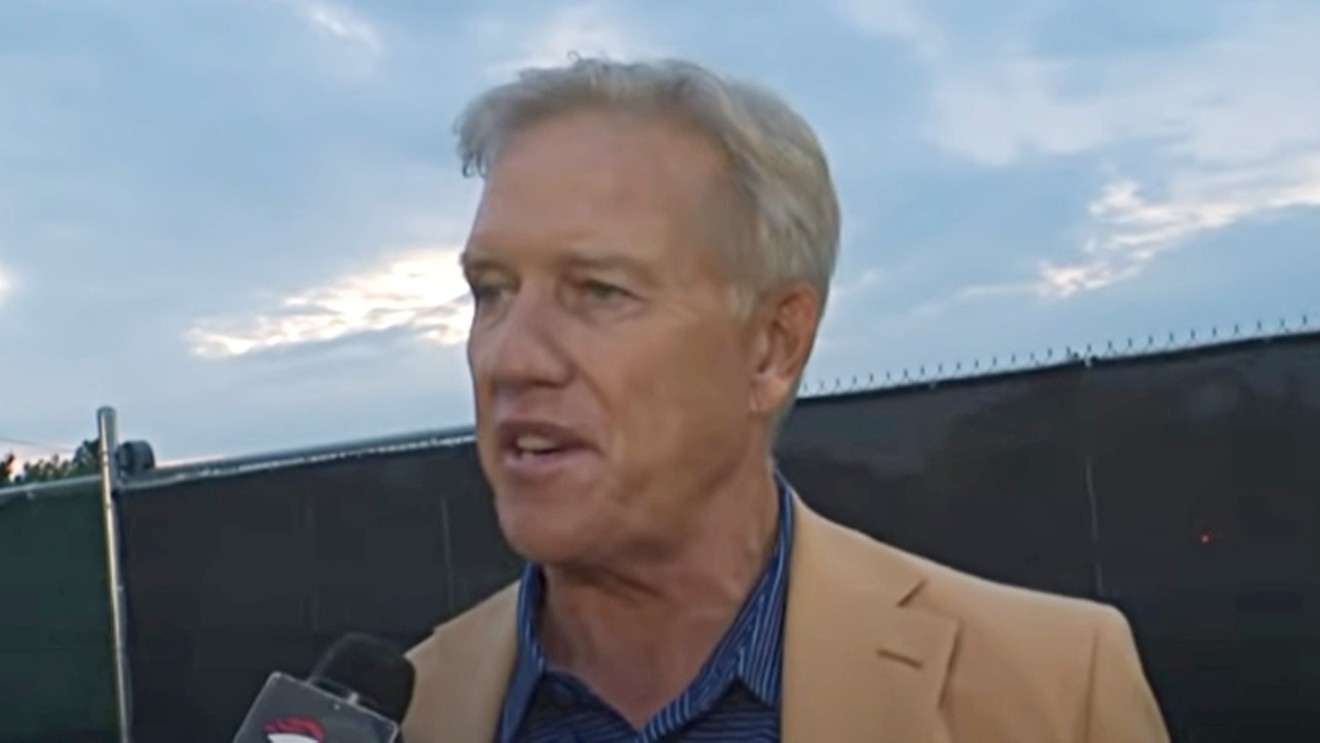 In this August 2021 interview, John Elway called Peyton Manning "arguably the greatest QB to ever play the game." Denver Broncos via YouTube
John Elway is unquestionably the greatest player in the history of the Denver Broncos, and during his early years as an executive with the team, his acquisition of Peyton Manning and other top talent led to a great four-year stretch and the Super Bowl 50 championship. But the squad has been so terrible since then that Elway has torched an astonishing amount of the goodwill he'd accrued — so much so that reports he might be making a bid to purchase the team are filling many Broncos fans with terror.

Ever since late Broncos owner Pat Bowlen handed over control of the franchise as he battled  Alzheimer's back in 2014, the ownership situation has been in flux, and after a series of bizarre shenanigans essentially took presumed heir John Bowlen out of the running, things have gotten messier and messier thanks to intra-family lawsuits and more. No wonder that in early 2020, Joe Ellis, who heads the trust currently running day-to-day operations, conceded that a sale could be in the team's future — and a court ruling earlier this month appears to have removed most of the impediments to such a transaction.

Shortly thereafter, the Gazette's Woody Paige tweeted that six ownership groups were seeking to buy the team, suggesting that Elway and Manning were in different collectives — and it didn't take long for most Denver loyalists to make their preferences clear. In a January 11 online poll conducted by 104.3 The Fan host Zach Bye, more than 90 percent of the 3,000-plus participants favored Peyton over Big John.

Turns out the supposed face-off between the two ex-quarterbacks may have been overstated. Yesterday, January 17, Elway told 9News's Mike Klis that he would like to be part of an ownership group — a comment that raises questions about whether he's currently involved with one or still fishing.

Nonetheless, a debate over whether Elway should have even a small stake in Broncos ownership has erupted on social media, and while some loyalists think he's earned this opportunity by way of his many positive accomplishments over the years, the majority of commenters loathe the notion. See what we mean by counting down the following tweets.

The new fan chant is “Go Away Elway”

That took six years? The mess the Broncos are today are his responsibility. If Elway can get the credit, then he can take the flak. He is a big boy.

Fans should take up a go fund me to pay Elway to stay as far away from Dove Valley as possible. The guy needs to be told #BroncosCountry no longer wants him in any role with the team than a tribute statue

Broncos fans can praise Elway for what he accomplished but also acknowledge that he made huge mistakes in the past five years as GM. Six years without playoffs but his decisions didn't lead to that? Come on. Elway does not deserve a pass because of SB six years ago.

I hope Elway doesn’t win in buying the Broncos.

HELL NO!!!!! John Elway would 'like to be involved' in potential Broncos' new ownership group https://t.co/9XSzLH4HTR

A new Broncos owner needs to keep Elway as far from the franchise as is humanly possible.

Broncos is terrible get Elway out of there ..Teddy the best he got

Elway did a lot of great things for the Broncos and is still the goat in Broncos history, but to deny the fact he botched getting a viable QB would be ignorant.

Elway made decisions based upon arrogance and stubbornness and ultimately was a massively incompetent GM. He could have put his ego aside and built a franchise like the 49ers

No. Been an Elway fan for years but don’t think ownership is in his forte

That’s the point, why would a billionaire need Elway. Before his disastrous last few years as a GM his name would lend credibility to a group. If reports are true, Manning has had discussions with a group, meaning some billionaire is at least interested in Manning’s involvement.

Quick and easy! Manning is a better fit as part of the Broncos ownership. He loves this city and seems to want what's best for the Broncos. Elway seems to want to continue making sure his records are not broken.

You're kidding. Elway brings in how many previous defensive coached as head coaches and we keep getting better defense and NO offense. He proves an inability to recruit good QBs, with the exception of Manning, and demonstrates he can't fix our offense. Time for a change! #TFAC!

Elway has control between 2011-2019 I think. During that span how many good seasons did we have with someone not named Manning under center?

I also may be wrong here, but outside of a few studs, draft classes were nothing to write home about.