Broncos Would Be in Most Arrests Super Bowl 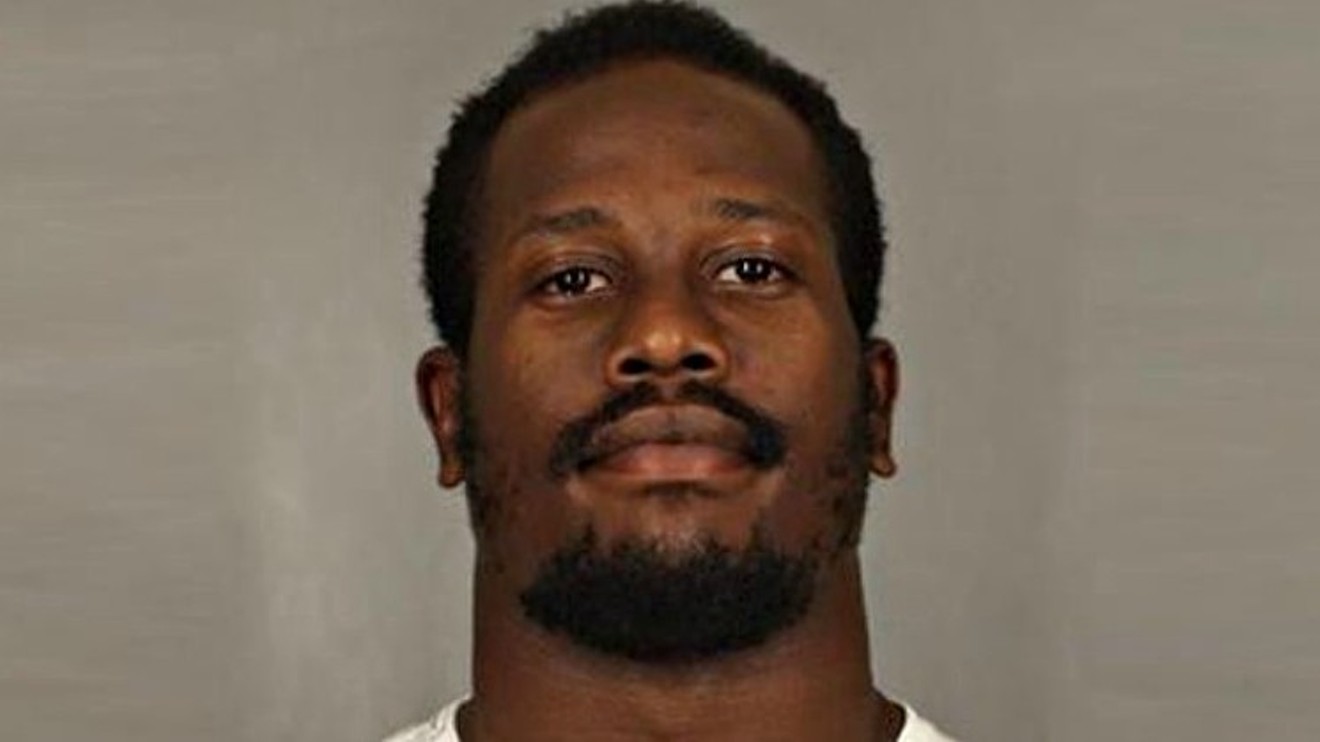 A Von Miller mug shot from 2013. He's currently under investigation for an unspecified offense in Parker. Arapahoe County Sheriff's Office
On Sunday, February 7, the Kansas City Chiefs and the Tampa Bay Buccaneers will meet in Super Bowl LV. But while your Denver Broncos didn't come close to qualifying for the contest by regular season wins and losses (they finished with a putrid 5-11 record) and victories in the playoffs (which they failed to reach), they would be in the big game if measured by a different metric: most arrests.

Dating back to 2000, the Broncos currently have the second-most arrests of any National Football League — 53, trailing only the Minnesota Vikings, with 54. And if former Super Bowl MVP Von Miller is arrested for a third time since joining the squad, the Broncos will be tied for the top spot in one of the most embarrassing categories imaginable.

On January 15, the Parker Police Department confirmed that Miller, who had two 2013 arrests for driving-related matters (one of them resulting in the booking photo above), was at the center of a criminal probe over a suspected offense that the PPD declines to specify. On February 4, nearly three weeks later, Josh Hans, the Parker police's public-information officer, confirmed that "the case is still under investigation."

In 2012, Westword listed the 34 busts of Denver players since the launch of the NFL Player Arrest Database, an information repository created by the San Diego Union-Tribune that's currently maintained by USA Today. This total was good for third place at the time, behind both the Vikings and the Cincinnati Bengals, and even though the number rose to 38 for a May 2014 update, the rankings didn't change. But the eleven additional Broncos arrests between then and our January 2018 post on the subject brought Denver into a 49-49 tie with the Vikings.

Over the past three years, another four Broncos have been arrested — the most recent being running back Melvin Gordon, who was cuffed for speeding and suspected drunk driving in October 2020. Gordon pleaded not guilty to the charges on January 14; another hearing is slated for February 24, and should no resolution be reached in the interim, his trial is scheduled to get under way on April 8.

The Broncos' 53 arrests during a span of just over two decades puts Denver head and shoulders above the vast majority of NFL teams in cuffings, with the exceptions of the Vikings and the Bengals, whose current total sits at 52.

Too bad the Broncos are only elite when it comes to brushes with the law.

Below is the countdown of the 53 Broncos arrests from 2000 to today, culled from the NFL Player Arrest Database. The entries are arrayed in reverse chronological order and feature players both famous (even current Monday Night Football co-host Brian Griese makes an appearance) and obscure.

51. Chad Kelly Quarterback 10/22/18
Charged with first-degree criminal trespassing after police were called about a man inside a home in Englewood, Colorado. Pleaded guilty to misdemeanor, one year probation, fifty hours community service.

50. Adam Gotsis Defensive End 3/17/18
Apprehended in Atlanta, accused of rape in an incident that happened in 2013 when Gotsis was a student at Georgia Tech. Dropped by prosecutors.

49. Carlos Henderson Wide Receiver 01/14/18
Arrested in Louisiana on a marijuana charge during a traffic stop. He was the passenger in the vehicle. Plea agreement, NFL suspended one game

45. John Boyett Safety 10/22/14
Arrested assault. Accused of being drunk, head-butting and hitting a cab driver and trying to hide from police by stealing a shovel and covering himself in mulch. Additional note: Resolution undetermined. Team cut him the next day.

42. Julius Thomas Tight End 08/28/13
Arrested failure to appear. Pulled over for speeding, charged with failing to appear in court for previous traffic ticket from Jan. 25, 2013. Additional note: Pleaded guilty to having a defective vehicle, adding two points to license.

41. Von Miller Linebacker 8/11/2013
Arrested in a Denver suburb on a warrant because he failed to appear in court on misdemeanor traffic charges. Additional note: Pleaded guilty to traffic offenses, required to take driving class and do 24 hours of community service.

39. Quinton Carter Safety 3/9/2013
Arrested in Nevada on felony charges alleging that he cheated at a craps game at the Texas Station casino. Additional note: Case dismissed.

38. Elvis Dumervil Linebacker 7/14/12
Arrested for suspicion of aggravated assault after a road rage incident in Miami.

35. Matt Prater Kicker 8/2/11
Arrested on suspicion of DUI and leaving the scene of an accident after his Chevy Trailblazer backed into an unoccupied car.

34. Laurence Maroney Running back 1/17/11
Arrested after police found guns and drugs in car with four other men in St. Louis.

33. Kevin Alexander Linebacker 12/20/10
Arrested on suspicion of assault and battery in domestic incident with girlfriend. Additional note: Team announced he was cut from the team the same day.

28. Richard Quinn Tight end 9/7/09
Arrested on domestic violence and harassment charges after woman said he grabbed and shook her during an argument and grabbed the phone from her while she tried to call 911.

26. Brandon Marshall Wide receiver 3/6/08
Arrested in Atlanta after his longtime girlfriend claimed in an affidavit that Marshall hit her in the mouth and left eye March 4. Additional note: NFL suspended him one game after this, his third arrest in a year. Acquitted.

25. Marcus Thomas Defensive tackle 3/1/08
Arrested in Florida after police found cocaine and a gun in his truck. Additional note: Dropped.

24. Andre Hall Running back 2/19/08
Turned himself in and was booked into jail after arrest warrant was issued in Florida for failing to appear in court Feb. 5. The court appearance was for a charge of driving with a suspended or revoked license after traffic stop Jan. 11. Additional note: Paid $513 bond.

22. Daniel Graham Tight end 1/11/08
Arrested on suspicion of criminal mischief and harassment of former girlfriend after argument about sale of their home. Additional note: Dropped the next week.

19. Brandon Marshall Wide receiver 10/22/07
Arrested on suspicion of drunken driving in Denver. Additional note: Pleaded to reduced charge of driving while impaired, sentenced to a year of probation.

18. David Kircus Wide receiver 5/20/07
Charged with felony assault after alleged fistfight at party. The other man in the fight was hospitalized with broken bones in his face.

16. Sam Brandon Safety 9/27/06
Turned himself in on arrest warrant for violating a restraining order. Additional note: Suspended by NFL for two games in 2007, stemming from previous arrest

15. Karl Paymah Cornerback 5/26/06
Officers found him unconscious in SUV, with vehicle running and in gear. Additional note: Convicted of DUI and careless driving on July 16, 2008.

9. Daryl Gardener Defensive Tackle 7/18/03
Arrested disorderly conduct. Accused of fighting with another customer during long wait to be seated at restaurant. Gardener tore ligament in wrist.

8. Russell Newman Defensive Tackle 07/18/03
Arrested disorderly conduct. Accused of fighting with another customer during long wait to be seated at restaurant.

7. Dwayne Carswell Tight end 7/4/03
Arrested in Atlanta and charged with simple battery, domestic violence and obstruction of an officer after a fight with his girlfriend. Additional note: Guilty, suspended one game.

5. Eddie Kennison Wide receiver 9/2/01
Arrested and charged with three misdemeanors after an argument with a bouncer outside a Louisiana nightclub. Additional note: Dropped. Page down to continue counting down the 34 Denver Broncos arrested since 2000.

3. Brian Griese Quarterback 10/28/00
Arrested on suspicion of driving under the influence in south Denver. Additional note: Pleaded guilty to driving while impaired, one year probation, $418 fines and costs.

1. Rod Smith Wide receiver 1/24/00
Arrested on misdemeanor charges of third-degree assault and harassment for allegedly choking and hitting the mother of his two children at the couple's home in Parker, Colo. Additional note: Pleaded guilty to verbal harassment, $25,000 conditional NFL fine, group therapy.
KEEP WESTWORD FREE... Since we started Westword, it has been defined as the free, independent voice of Denver, and we'd like to keep it that way. With local media under siege, it's more important than ever for us to rally support behind funding our local journalism. You can help by participating in our "I Support" program, allowing us to keep offering readers access to our incisive coverage of local news, food and culture with no paywalls.
Make a one-time donation today for as little as $1.