Will New-Look City Council Push Back Harder on Where Denver Spends Its Dollars?

New councilmembers are raising questions about the budget process. Denver City Council
Mayor Michael Hancock's proposed 2020 budget is a colossal 632-page document, and there are countless ways to break down how the City of Denver plans to spend its billions of dollars.

For a glimpse, look at the one-page infographic made by the mayor's office, which paints a neat, ambitious picture of how the city will invest in solving its greatest issues: $97 million to "address affordability challenges and increase support to those experiencing homelessness," $118 million to "increase mobility and transportation," $40 million to "combat climate change," $864.2 million to "invest in complete and safe neighborhoods," and $3 million to "deliver a more equitable city."

But when you dig into the details — exactly how many dollars will go to what agencies, for which specific efforts, and what percentage of the funds are allocated to which priorities — the picture gets a lot more complicated. For example, despite the emphasis on funding for housing affordability, the new Department of Housing Stability gets one of the smallest slices of the pie — only about 1 percent, or $21.07 million — from the $1.49 billion general fund, or the main stable funding source for the city, which comes from sales, revenue and property taxes; fines and fees; and a few other special transfers.

To be clear, that's not the city's full investment in housing: There are also funds from the linkage fee and other revenues not included in the general fund, and services and programs that are outside the purview of the new department. But it pales in comparison with the 40 percent of the general fund that the city spends on public safety, which includes the fire, police and sheriff's departments, plus administration.

The pie chart below gives an incomplete picture of the city's funds, since it doesn't include the $484 million capital improvements fund, which is invested in building, maintaining and improving city assets such as buildings and infrastructure. 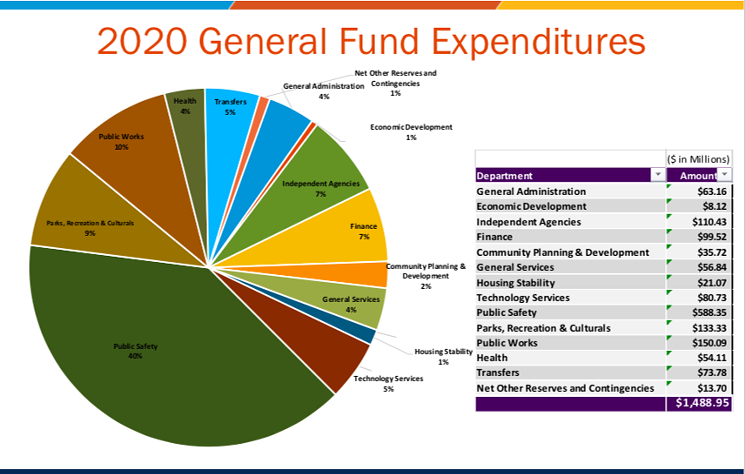 City of Denver
Figuring out the breakdown of exactly where that money is spent takes even more digging. That's what city council members have been tasked with doing over the past few weeks since Hancock announced the budget on September 9. They've listened to hours of budget presentations from city departments and agencies, and now they're in the process of figuring out what changes they'll recommend.

Along the way, some of the newer members of council have questioned the process itself.

Councilwoman Candi CdeBaca posted a scathing critique of the city's budget process on social media, calling the entire process "backwards." "It honestly blows my mind to see the level of waste, inequity, obliviousness, lack of strategy and overall lack of leadership. Most organizations (government, private and nonprofit) that I have been a part of budgeted in a much more coherent fashion," she wrote.

CdeBaca says that the way the budget is drafted and presented makes it almost impossible for council to fully grasp, much less have power over whether the city puts its money where its mouth is. As is customary, by the time Hancock released his budget in September, each agency had already made its own requests to the mayor's office, which calls the shots on the large-scale allocation of city funds. The agencies then make presentations to council about their budget plans. "It’s not only opaque because there are so many agencies; to some degree, it’s intentional. It's top-down; you don’t want people to see the right thing and ask the right questions," CdeBaca notes.

Agencies and departments also don't follow a consistent template that shows their budget line by line. "I felt like the presentations that we had were more about the organizations than about the organization's budget," Councilman Chris Hinds says. "I might be in the minority, but I would have preferred to actually have gotten into the weeds of the more specific."

Just before Denver City Council members met on the afternoon of October 2 to decide which changes to recommend, the Department of Finance released an online simulator that it bills as "an interactive way to learn more about the city’s revenues and budgeted expenditures." It lets any member of the public play with the city's $1.49 billion 2020 general fund budget by lowering and raising spending amounts for eighteen categories (which, of course, are broken down far more in the actual 600-page document), without letting the user cut baseline services or go over budget. The user can then "submit" their proposed budget to the city with comments. Right now the simulator is an educational tool rather than a source of feedback for the administration, says Julie Smith, communications director for the Department of Finance.

Traditionally, city council has suggested changes it wants to make as a body by first sending a letter to the mayor, sometimes ranking its priorities with a count of how many councilmembers support various provisions. Individual councilmembers can also suggest their own changes.

Although there are no charter limitations on the scope of changes that council can recommend, the time crunch of the deliberative part of the process means that council has historically recommended only minor changes, such as increased funds for a certain dedicated cause like a particular arts fund or human-services program.

The budget changes that council suggested this year are along similar lines, but there are more of them than in years past. Eighteen suggestions, give or take, will be finalized in a letter that council president Jolon Clark will send the mayor by Friday, October 4.

For example, Councilwoman Robin Kniech pushed for a human-services component to go along with tiny homes, funding caseworkers who will help formerly homeless people in tiny home villages access services and get into permanent housing. Councilwoman Stacie Gilmore asked for increased funding for the Office of Aging, in part to expand DenverConnect, a senior service via a mobile van outfitted with computers.

CdeBaca pushed for a number of requests designed to serve vulnerable groups, calling her budget proposal "Do Better Denver." Her measures included funding for porta-potties, trash cans and lockers for homeless residents, as well as an increased business opportunity fund for small-business owners impacted by the I-70 expansion.

Councilmembers are still debating whether to ask that their proposals be funded. They may ask to use an unallocated $1.45 million in the general fund that the National Western Center withdrew from requesting for a rail expansion, or dig into the general fund's reserves, which is a squeeze since those are not supposed to dip below 15 percent of expenditure. They could also ask to defund or decrease funds for other projects — like, for example, the mayor's Office of Storytelling. However, some councilmembers pointed out that it was difficult to figure out how to suggest reallocating funds. "[My office] put in a fair amount of time trying to find line items, and each time we’d find a line item we’d say, 'I don’t know what that is,'" Hinds said at the first budget workshop. "I don’t want to scavenge from the highway awareness fund when I don’t know what it is.”

CdeBaca's budget package targets what she alleges is "administrative bloating," pointing out that almost all mayoral appointees and top city officials pull in salaries over $100,000.

Theresa Marchetta, a spokesperson for Hancock's office, sent a statement by email to Westword: "We have not yet received Council’s requests and should honor the process of receiving those and responding back to the body, not to one individual council person."

After Clark sends the letter to the mayor, Hancock will look over the suggestions and decide whether to make changes before submitting a new draft of the budget the third Monday in October.

After holding a public hearing, council has a second, more formal chance for changes: Members can "revise, alter, increase, or decrease" any items during their first regular meeting in November. While the mayor has the option of vetoing those revisions, council can override the veto by a two-thirds vote.