Elevators Down for Over a Week at Fifteen-Story Columbine Towers

The elevators at Columbine Towers have been out of service since June 28. The day before, residents were notified by notes on their doors that the elevators would be down the next day for maintenance. But after a week of waiting, the elevators still aren't working.

On July 3, 79-year-old Antonia Caballero, who lives on the fourteenth floor, decided that she couldn’t wait any longer to leave: She was out of food and needed groceries. Although building management had provided a number for tenants to call if they needed assistance getting to and from their apartments while the elevators were down, Caballero says that no one ever answered the line. So she decided to take action.

By the time she got down to the lobby, she was already tired. After she'd walked to the store and back with her groceries, she was exhausted. There were two security guards in the lobby, but when Caballero asked if they could help her carry her groceries up, she says they declined, explaining that they were there just to check people in.

Someone visiting another tenant helped Caballero instead. But when they'd reached the tenth floor, she fell, hitting her head on the wall. She woke up to neighbors tending to her, putting ice on her neck; she was eventually taken by ambulance to the hospital. 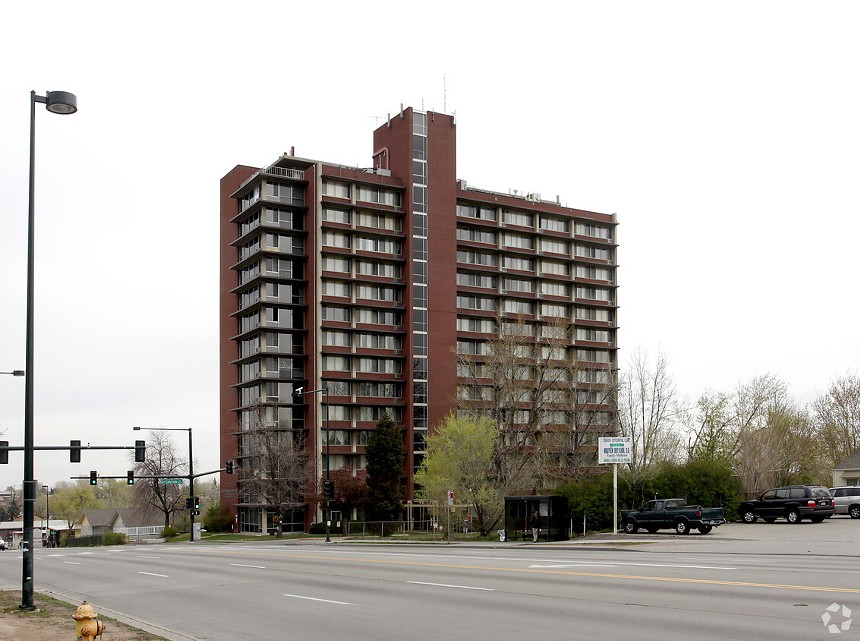 The Columbine Towers on South Federal Boulevard.
Apartments.com
Tiffany Ward-Esteras, Caballero’s granddaughter, who helped translate during her interview with Westword, has been taking care of her abuelita since the accident. She says that her grandmother fell again on July 4 in the apartment and passed out. Caballero doesn’t remember that fall, and Ward-Esteras is worried that Caballero has a concussion.

Caballero would like to see a doctor for a follow-up appointment but is scared of the stairs. She says she wants to go once the elevators are repaired, but has been given no timeline.

Assistant chief Greg Pixley, spokesman for the Denver Fire Department, says that building management is working to fix the problems with the elevators, which involve the braking system. Because of a supply-chain issue, required parts aren’t yet available, he adds, but the maintenance team is trying to figure out a solution.

Caballero has lived in the building for nine years. She pays $963 per month in rent, more than the $841 she receives from Social Security; Section 8 vouchers help her cover the expense. Ward-Esteras says that other members of the family often pitch in to buy groceries for Caballero.

When Caballero first moved in, she liked living in Columbine Towers because it's close to the grocery store, a bus stop and her favorite library branch. But now everything is falling apart, she says.

Antonia Caballero plans to sue building management at Columbine Towers.
Catie Cheshire
Her apartment, like those of many of her neighbors, has water damage and holes in the walls that were improperly repaired. Her shower tiles have been broken for three months, and no one from management has responded to her requests to fix them. She says that the office closes earlier than it’s supposed to on most days. “I feel like a prisoner, like I don’t have any freedom,” Caballero says.

Westword could not reach anyone in management for a comment; no one responded to a message left at Columbine Towers yesterday.

Caballero is now working with high-profile attorney Jason Flores-Williams to file a lawsuit against building management, which could be filed in federal court within the next two weeks. Flores-Williams says it will focus on premises liability — claiming that management is negligent when it comes to tenant safety — as well as violation of city codes in regard to the elevators; and violation of the Fair Housing Act, since the building operates as a Section 8 premises and receives federal funding to help house people.

According to Flores-Williams, the building manager lives in the penthouse of Columbine Towers. “This building is like a microcosm of the socio-economic conditions on the planet,” he says.

A broken chair in a stair landing at Columbine Towers.
Catie Cheshire
When he first heard about Caballero’s situation, Flores-Williams says he wasn’t sure if he would take the case because it’s different from those he's argued lately — typically high-profile civil liberties cases — as well as abortion defense, a new priority. But once he visited the apartments and saw the conditions, he adds, he knew he had to try to help Caballero.

“This woman is a fighter,” he says.
KEEP WESTWORD FREE... Since we started Westword, it has been defined as the free, independent voice of Denver, and we'd like to keep it that way. With local media under siege, it's more important than ever for us to rally support behind funding our local journalism. You can help by participating in our "I Support" program, allowing us to keep offering readers access to our incisive coverage of local news, food and culture with no paywalls.
Make a one-time donation today for as little as $1.