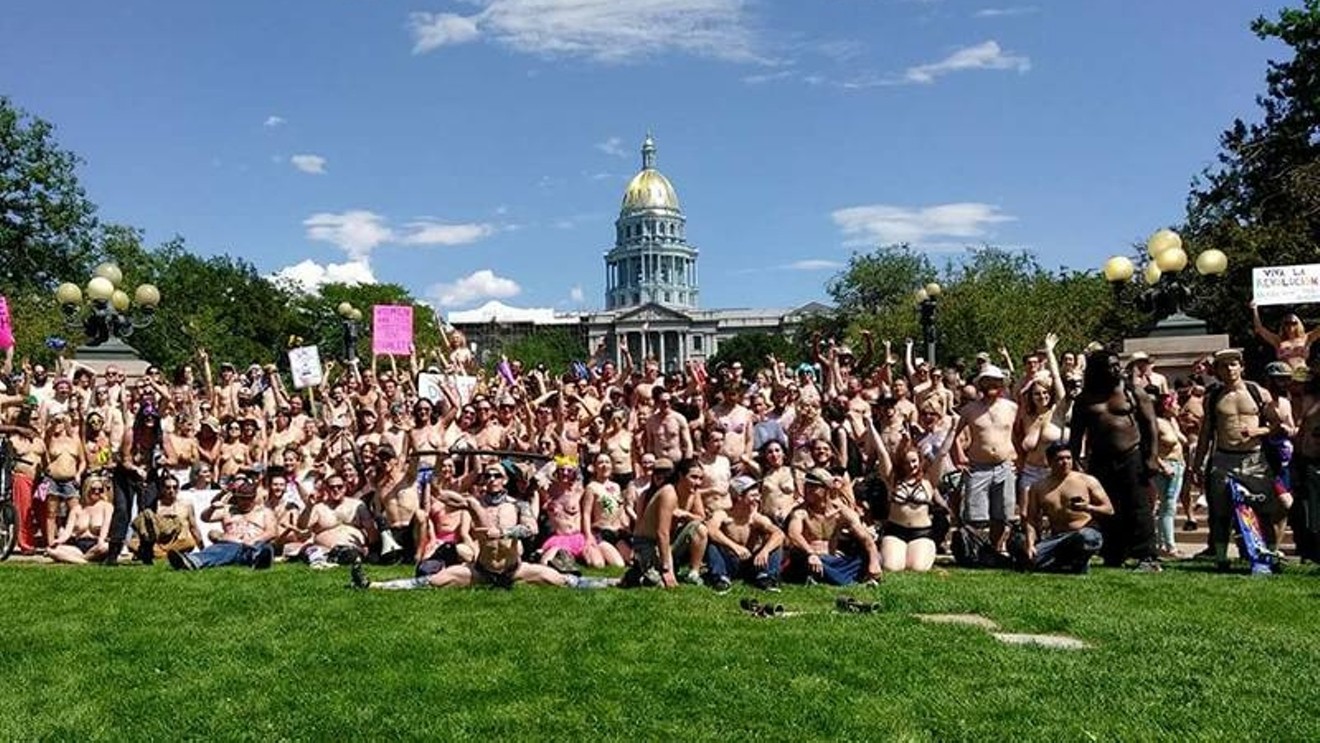 A group photo outside the State Capitol on a previous Denver GoTopless Day. Courtesy of Denver GoTopless Day
This Saturday, August 29, was supposed to mark the return of an annual gathering that's become a Mile High City signature: Denver GoTopless Day. But after months of planning, the organizers behind the annual celebration of equality and body positivity, which regularly attracted more than 1,000 participants, reluctantly chose to pull the plug. And the announcement of this decision puts the blame squarely on those individuals whose refusal to get vaccinated or follow other basic protocols related to COVID-19 made guaranteeing the safety of those taking part impossible.

"We at Denver GoTopless are unwilling to place selfishness over social safety — even one death traced to our event would be too many — no matter how popular a rallying cry 'Fuck Your Feelings' has become in America nowadays," the statement reads. "Denver GoTopless is about social justice, which we as individuals and as a nation can never attain if we’re willfully blinding ourselves to others’ pain."

Denver GoTopless Day is among a growing number of events that have been canceled because of worsening pandemic conditions in Colorado and beyond. Other examples include the Bohemian Light Music Festival, which was supposed to happen August 14-15, September's Denver Buskerfest and Denver Rare Beer Tasting, and the headlining tour of Florida Georgia Line, previously slated to stop at Ball Arena on November 16. And the series of events that led longtime organizers Mia Jean and Matt Wilson to determine that they should put the 2021 Denver GoTopless Day on hold, just as they did last summer, is revealing.

Denver GoTopless Day debuted in 2013. The first edition was a modest get-together conceived by a handful of activists led by Bambi McMillan, who described herself as "a strong believer...in gender equality." Adriana Beru, the person behind the 2014 version, shared that goal, as did the dozens of individuals who marched alongside her. Among them was Wilson, a strong ally in the group's mission. "There are many people who recognize the double standards women face in society, and virtually all women have stories of being personally objectified, slut-shamed or victim-blamed by self-entitled men (#Smile, #DickPics, #SexSells, #WhatWasSheWearing, #MeToo, etc)," he told us in 2018. "This cause is a crucial pivot point for so many frustrations women face. Knowing it encompasses these issues, while enabling them to feel the freedom and empowerment of public toplessness, motivates widespread involvement." Two previous participants in Denver GoTopless Day.
Courtesy of Denver GoTopless Day
The growth of Denver GoTopless Day under the stewardship of Wilson and Mia Jean, including 16th Street Mall marches and more, coincided with challenges to local laws that made female toplessness illegal. The leader of the movement was Free the Nipple Fort Collins, which sought to remove the words "the breast or breasts of a female" from the community's public-indecency ordinance in 2015 — and succeeded two years later, when a federal judge issued an injunction against the city on constitutional grounds.

The growing momentum of Denver GoTopless Day hit pause in 2020 with the rise of COVID-19. But this summer, Wilson and Mia Jean began laying the groundwork for a comeback. In late July, Wilson was still hopeful that the show would go on: "A month ago, recommendations of health experts about the relative safety of outdoor events were more reassuring. Studies overwhelmingly showed how effective masks reduced the spread, and we were seemingly on track to an adequately vaccinated population. With the emergence of the Delta variant amid vaccination resistance, however, prior recommendations are looking increasingly outdated. Tuesday, July 28, the CDC issued new guidance recommending indoor mask use in areas with high transmission rates after new data suggested fully vaccinated individuals are not just contracting COVID-19 but could potentially infect others. I feel that dropping the mask mandate three months ago was premature and influenced by political pressure, and I worry that politics are still pressuring pandemic officials into hesitancy. Even though our event is held outdoors, I am concerned about participant proximity and Delta transmission. We will continue to monitor CDC recommendations, outbreaks, and vaccination rates up until GoTopless Day. The more people take the virus seriously, the less chance our event will be canceled."

But just a few weeks later, Mia Jean and Wilson determined that postponement was inevitable — and in their announcement of that move, their activism shines through. "Though we long for a return to 'normal,' we remain pro-mask & pro-vaxx, preferring an abundance of caution for social safety's sake," they announced. "Many of you have been waiting to hear if DGT August 2021 will be taking place and, given the arrival of the Delta variant, the answer has, unfortunately, changed to No."

Owing to current regulations in Denver, "we were unable to secure a permit for a full-scale 2021 parade," they explained. "With the risks posed by COVID-19, there was the possibility a parade, with potentially hundreds of participants walking shoulder-to-shoulder or bunched up at intersections and breathing each others' air, could be unsafe. We preferred not to take the risk. For a while this year, masks, social distancing, and increased herd immunity through vaccinations looked to increase safety for smaller gatherings, so for 2021 GoTopless Day we were going to adjust accordingly, encouraging an informal, socially-distanced gathering this year, avoiding dense crowds and packed sidewalks."

But as they reminded supporters: "Denver GoTopless Day isn’t merely a parade and group photo. There’s fellowship, hugs, and participants posing with each other for selfies and pic requests. All of these activities increase risk of viral transmission.... Unfortunately, anti-mask, anti-vax propaganda has led many to forego their basic senses of compassion and social responsibility, and opened the door to millions of avoidable infections. Not enough of us listened to experts begging us to take the pandemic seriously and warning us how every host is an opportunity for virus mutation. So here we are with the Delta variant, a form far more infectious than the original. A vaccine is not a cure, yet available vaccines have proven effective at drastically reducing severe illness, hospitalizations, and deaths within the vaccinated population. In unvaccinated populations, however, the virus is still packing patients into hospitals and killing thousands per week. Because of the higher infectiousness of the Delta variant, even vaccinated individuals have a risk of passing the virus on to others."

So Denver GoTopless Day is off again in 2021 — but Mia Jean and Wilson aren't closing the door on the event forever. They put it this way: "Hopefully by next year, America will have come to its senses."
KEEP WESTWORD FREE... Since we started Westword, it has been defined as the free, independent voice of Denver, and we'd like to keep it that way. With local media under siege, it's more important than ever for us to rally support behind funding our local journalism. You can help by participating in our "I Support" program, allowing us to keep offering readers access to our incisive coverage of local news, food and culture with no paywalls.
Make a one-time donation today for as little as $1.