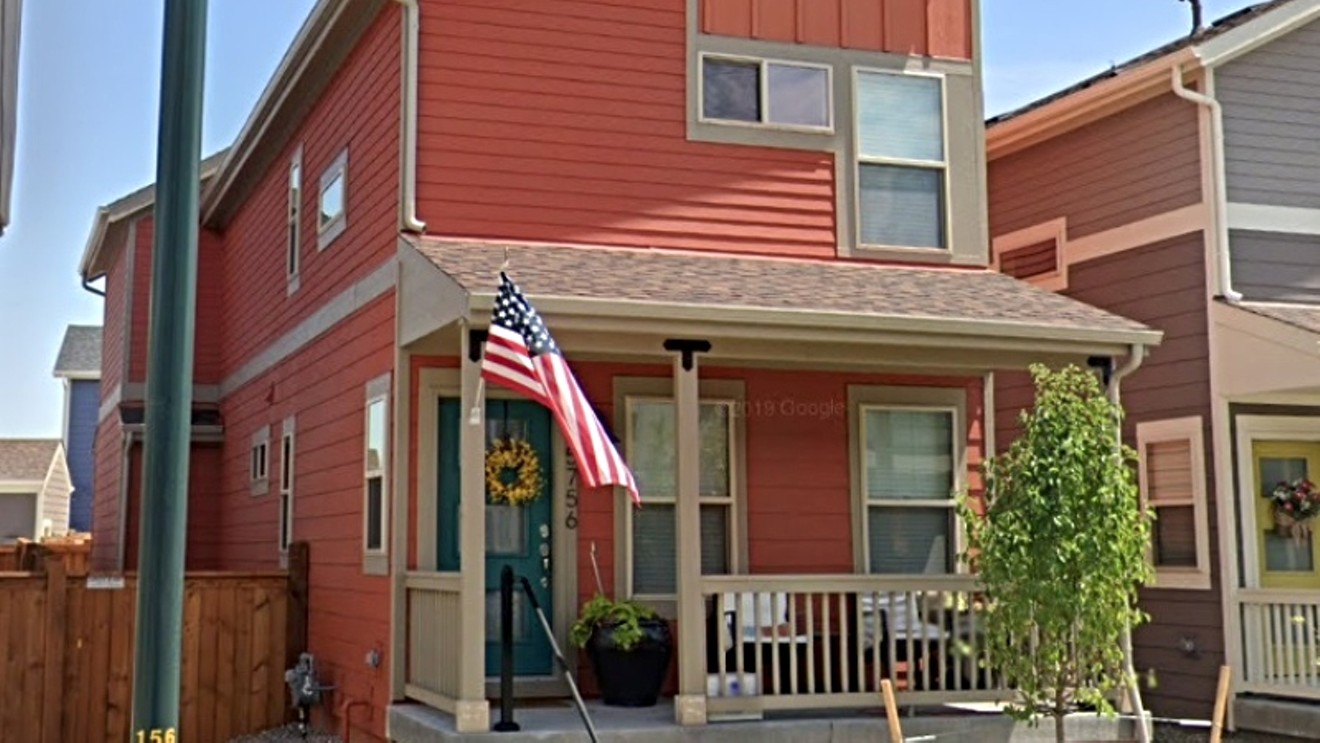 This three-bedroom, three-bathroom home at 5756 Boston Street in the Central Park area is listed at $680,000, just below the average sale price for a detached house in metro Denver last month. Google Maps
The average price of a detached home in metro Denver went down slightly last month, after a surprising jump in December 2021. But according to the latest report from the Denver Metro Association of Realtors, another decline will be ultra-unlikely in coming months. Because the number of homes available for sale in the area is at what's described as a "historic...low," DMAR predicts "the continuation of extreme bidding wars."

Demand continues to overwhelm supply in the local real estate market, as has been the case for more than a year. The number of new single-family, detached-home listings active at the end of January, the most recent month for which statistics are available, landed at just 788, an 18.60 percent slide from the 968 lingering at the close of December, and a 37.61 percent dip on a year-over-year basis.

A graphic from the report, which runs from January 2008 to January 2022, puts these factors in perspective. The yellow line corresponds to active listings at the end of each month, while the blue line shows sales that closed over the same periods:

In January, the average price for a single-family detached home went down 2.13 percent, to $689,711. The average closing price that month was 102.15 percent of list, however, compared to 101.66 percent in December. This suggests that even more homes are being bid up — a trend that Andrew Abrams, a local realtor and chair of the DMAR market trends committee, doesn't see ending anytime soon. Far from it.

"Based on the historic low inventory and current market demand, prices will likely skyrocket in the next three months," Abrams says. "With the low inventory and competition, we are expecting prices to greatly increase in the first half of this year."

While such a scenario may seem like a boon to sellers, Abrams offers a note of caution, saying that buyers are likely to "grow frustrated through the process, leading to potential burnout." But he thinks that realtors can help prevent budget-strained house hunters from simply giving up: "Creativity in writing offers has been instrumental for a successful outcome," he explains. "I want to emphasize that there are still diamonds in the rough."

Click to read the Denver Metro Association of Realtors' February 2022 market trends report.
KEEP WESTWORD FREE... Since we started Westword, it has been defined as the free, independent voice of Denver, and we'd like to keep it that way. With local media under siege, it's more important than ever for us to rally support behind funding our local journalism. You can help by participating in our "I Support" program, allowing us to keep offering readers access to our incisive coverage of local news, food and culture with no paywalls.
Make a one-time donation today for as little as $1.