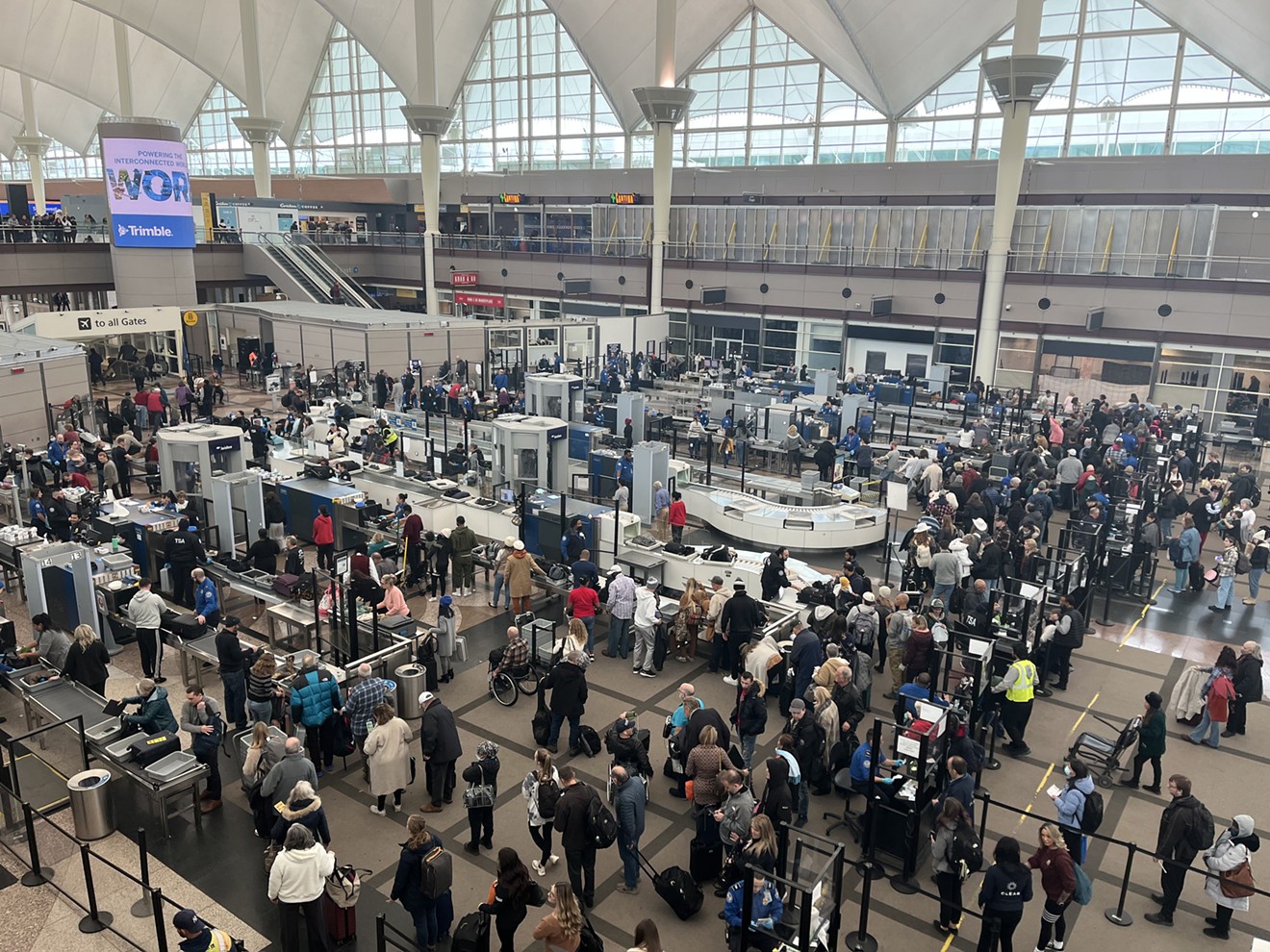 Denver International Airport expects to see 100 million passengers a year within a decade. Conor McCormick-Cavanagh
With a busy holiday season ahead at Denver International Airport, traffic is returning to pre-pandemic levels, making DIA the third-busiest airport in the country. "We’re not where we want to be, but we’re not where we were," CEO Phil Washington said as he offered a progress report on November 29.

Washington, who served as CEO for RTD from 2009 to 2015 before taking a job running the Los Angeles County MTA, was named CEO of DIA in July 2021 by Mayor Michael Hancock after longtime leader Kim Day left. Under Day's leadership, the airport had agreed to a 34-year, $1.8 billion deal with a Spanish company to remodel Jeppesen Terminal, moving security screening to the sixth level once reserved for check-in, and leaving plenty of space for shopping on the main floor. But that agreement imploded under the pressure of delays and cost overruns, and Denver terminated the contract in August 2019.

The airport has since moved ahead with parts of the Great Hall Project under other contractors, with a focus on security and efficiency rather than shopping.

Even with the ongoing construction, the airport saw 32.2 million passengers come through its facilities during the first six months of the year, which puts DIA on pace to be slightly above its pre-pandemic passenger numbers in 2022. The airport, which came in at number eleven on this year's list of best large U.S. airports in the Wall Street Journal, is on track to handle up to 100 million passengers annually within a decade.

During their update, Washington and other airport officials spoke at length about how DIA will get there, and the challenges still facing the airport. Here are five important takeaways:

"That usually is the biggest thing probably for any airport," Washington said. "We’re addressing that." According to DIA officials, the security wait time over the past five days, which included some Thanksgiving travel, was 28 minutes on average for regular lines and 10 minutes for TSA PreCheck.

The much-delayed Great Hall Project, which will end up costing over $2 billion and finally be wrapped up in 2028, will completely modernize the airport's approach to security. New security lanes on the sixth floor will increase the airport's capacity to process passengers by 60 percent, Washington says.

Helping to speed things up will be a new automated bag inspection system, already in use in certain sections of DIA, that doesn't require the constant monitoring of a human.

"If a bag alarms, this lane has the ability to divert that bag off to the side," said Dave Laporte, senior vice president of airport operations, who's been with DIA for over a decade. "Today, if there’s an alarm bag, the entire lane stops to resolve that." Under the new system, when a bag triggers an alarm, actual humans will inspect the bag — but they won't even have to open it, since the system has CT technology, which allows for image rotation instead of X-ray technology.

DIA wants cheaper RTD fares for the A Line

While traveling to the airport on RTD's A Line is almost always a smoother commute than driving there, it's not necessarily the most economical route. Passengers traveling to and from the airport get dinged for $10.50 each way, no matter where they start or stop. And EcoPasses, the employer-sponsored passes that can allow for unlimited rides, sometimes cost businesses and their workers more money than they can afford.

"We are working with RTD, and we are asking them and encouraging them to make it cheaper for our employees to come out here to work and also for travelers as well," Washington said. "Right now, it’s cheaper for people to drive and park out here than it is to take transit, and that should not be the case."

With RTD currently studying its fare structure for possible changes early next year, Washington has been encouraging the transportation agency where he once served as CEO to take a more nuanced approach to travel to and from DIA.

One idea is adding a zone-based system, "to allow for it to be structured that you’re not paying the $10 dollars that it is now to maybe ride one stop, because you can get on at 61st and Peña or 40th and Peña, and you pay the same fare as if you got on at Union Station," Washington said.

Another idea is to turn the airport into a master employer, since having a large number of workers under one EcoPass program lowers the cost per pass.

"All I know is that we’ve got a lot of low-income people who work here, and they should see some relief," Washington added.

Denver was rated as the worst city in the country for car thefts in 2021, and the rate of automobile theft has increased this year. And the Denver International Airport neighborhood, which encompasses DIA and surrounding land, is ground zero, with many of the thefts taking place in DIA parking lots.

"We are working with DPD on that. The patrols have been increased in the parking areas, and we’ll continue to do that," Washington said.

While he wasn't sure how people stealing cars from the airport parking lots are able to get them past the ticket booths, Laporte had an answer. "Cops say [drivers] are leaving the ticket and they can pay," he said. "They’re crashing the gates, too."

"It’s a frustrating thing, too, when you come from a trip and your car is not there or your catalytic converter is not there," Washington added. "We’re just going to stay on it. We’re looking at cameras in the garages as well."

Another way that Washington believes the airport can reduce car theft is by constructing a consolidated rental-car facility. The airport plans to fund that facility by increasing the fee placed on rental cars from $2.15 to $6 per day. According to Washington, the current fee is the lowest of any major airport in the country; the increase would put Denver in the average range of fees at these types of airports.

"That will be a one-stop shop for rental cars all in one location, all in one building, all in a building that is covered," Washington said. "When you talk about 100 million passengers and the weather that we get here and the hail damage that we get here and the theft problems, all of that sort of goes away if you’ve got a consolidated rental-car facility that is covered, which is five or ten floors."

Washington believes that the best transit option for getting to such a facility would be a train, which would need to be built. DIA does not yet have a cost estimate for the facility or train.

As an enterprise fund, the airport does not use general fund money from the City of Denver to cover its projects, but instead relies on bond money and its own revenue from fees, primarily those charged to the airlines that use the facilities.

Airport building Center of Equity and Excellence in Aviation

DIA recently selected a general contractor to construct its new Center of Equity and Excellence in Aviation, which Washington said "will help create a pipeline of aviation talent in this country."

The CEEA, which will be located on the fourth floor of the city-owned complex that houses the Westin Hotel and A Line station, will focus on training young people, individuals from underserved communities and airline employees who are interested in the aviation industry.

"We see it as a pipeline for everything aviation and providing young people, starting in grade school all the way to senior leadership, that pathway in the aviation space," Washington said, adding that it will allow DIA to become the "farm team for the industry in terms of staffing." The estimated cost for the facility is $40 million, with construction set to begin in mid-2024.

Train to the gates getting an update

The train that takes passengers from Jeppesen Terminal to all three of the airport's concourses is getting a major update, which will be welcomed by the thousands of passengers who have gotten stuck or delayed because of train breakdowns.

"We have ordered 26 new cars, and 22 of those will arrive next year," Washington said. "Some of them are arriving in February, I believe. Once they arrive, we’re going to be able to retire the original cars. We’ve got cars from 1995."

Sixteen of the 31 train cars currently in operation were there when the airport opened; the average life of those cars is an estimated 35 years. Once those older ones have been replaced and new ones added, the total train car count will be 41.

With changes like that and other upgrades, Washington concluded, "we will be able to accommodate 100 million in the next eight to ten years or so."
KEEP WESTWORD FREE... Since we started Westword, it has been defined as the free, independent voice of Denver, and we'd like to keep it that way. With local media under siege, it's more important than ever for us to rally support behind funding our local journalism. You can help by participating in our "I Support" program, allowing us to keep offering readers access to our incisive coverage of local news, food and culture with no paywalls.
Make a one-time donation today for as little as $1.