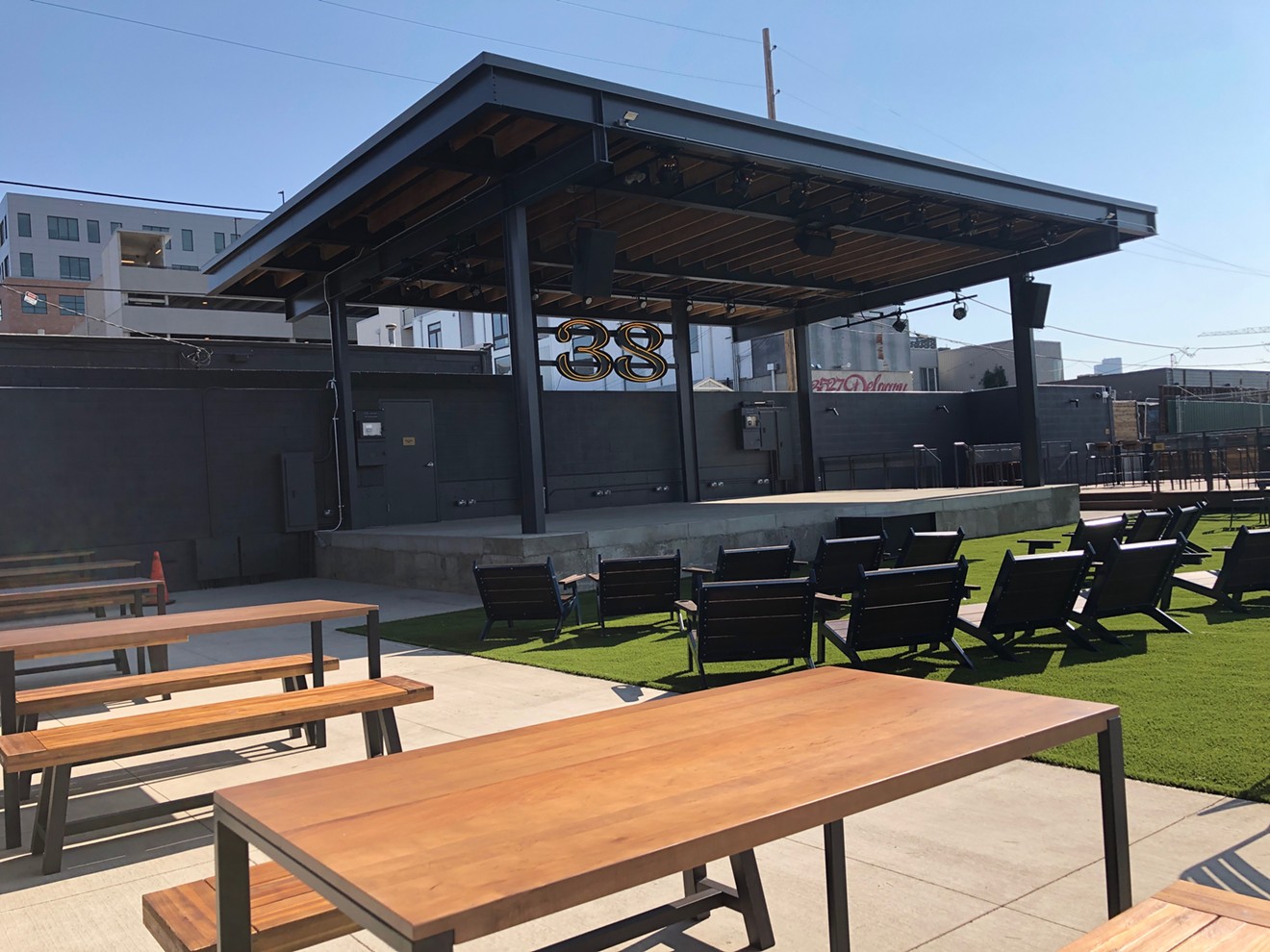 Number Thirty Eight survived last call. Jon Solomon
Number Thirty Eight, the RiNo music and booze venue that has been in danger of serious administrative action over noise violations, will be able to keep its cabaret and liquor licenses.

But Number Thirty Eight, which won Best New Venue honors in Westword's Best of Denver 2021, will have to pay a fine of $1,998, and its cabaret license will be suspended on six separate days in November.

"The suspension means there will be no live entertainment — including shows, live music, games of sport and performances of any kind — on those dates, but food and alcohol operations can continue," says Chuck Hickey, a spokesperson for the Department of Excise and Licenses, which came to a settlement agreement with Number Thirty Eight on October 13. Because of that, an administrative hearing set for October 14 will not take place.

In the settlement agreement, Number Thirty Eight admitted to thirteen violations of conditions attached to its cabaret license, specifically ones related to noise.

"Two years ago, with overwhelming approval from our neighborhood, we opened in RiNo, Denver’s liveliest arts district. Since then, and after discussions with representatives from the city, we have operated within what we believed to be the guidelines of the restrictions on our cabaret license," says Andrew Palmquist, a co-owner of Number Thirty Eight. "As of this week, we received confirmation on the nuances of our operations related to live and background music and some clarity on what we may currently provide."

On September 15, the Department of Excise and Licenses had sent a show-cause order to the three co-owners of Number Thirty Eight — Palmquist, Spencer Fronk and Brad Arguello — to notify them of the October 14 administrative hearing, where they would have a chance to explain why the venue at 3560 Chestnut Place shouldn't lose its cabaret and liquor licenses.

That order stated that the department had documented over a dozen noise violations by Number Thirty Eight since a May ruling issued by Excise and Licenses executive director Molly Duplechian mandated that Number Thirty Eight could only host live amplified musical performances and acts with drums indoors when the venue's windows and doors are shut.

And before there could be outdoor performances, the venue was required to finish construction on a cement wall to help with noise mitigation, according to the order. Once that wall was completed — and the owners say that it's finished — Number Thirty Eight could host acoustic music outdoors, but still could not offer amplified music or music with drums outside.

Duplechian released her May ruling after neighbors had complained about what they said were unbearable — and, at times, illegal — noise levels emanating from Number Thirty Eight, which had opened in October 2020. The noise that drew the ire of these neighbors came from both live performances and also pre-recorded music played through outdoor speakers at the 31,000-square-foot venue.

The neighbors who had lodged the initial complaints with the city about the noise and opposed the renewal of Number Thirty Eight's cabaret license were upset by Duplechian's ruling, and continued monitoring the venue, checking for violations of the new agreement. It didn't take long for the neighbors to find some, which ultimately led to the order setting the October date for the now-vacated administrative hearing.

Tom Downey, a liquor license attorney representing the neighbors, is disappointed with the deal that the city has made with Number Thirty Eight.

"They have gotten away with lying and saying that they're going to do better for two years now, and the city is letting them get away with it again, to the detriment of the neighbors," Downey says. "To pay a mere fine less than $2,000 and have to have no music during six days in the winter months is meaningless."

While Number Thirty Eight, which might have gone out of business if it had lost its liquor and cabaret licenses, will still be able to operate, the venue will have to be careful to not get on the wrong side of the city again.

"If there are any further alleged violations within the next year, there will be a ten-day closure of the business," says Hickey.
KEEP WESTWORD FREE... Since we started Westword, it has been defined as the free, independent voice of Denver, and we'd like to keep it that way. With local media under siege, it's more important than ever for us to rally support behind funding our local journalism. You can help by participating in our "I Support" program, allowing us to keep offering readers access to our incisive coverage of local news, food and culture with no paywalls.
Make a one-time donation today for as little as $1.