Does Science Prove Pit Bulls Are Vicious or Misunderstood? 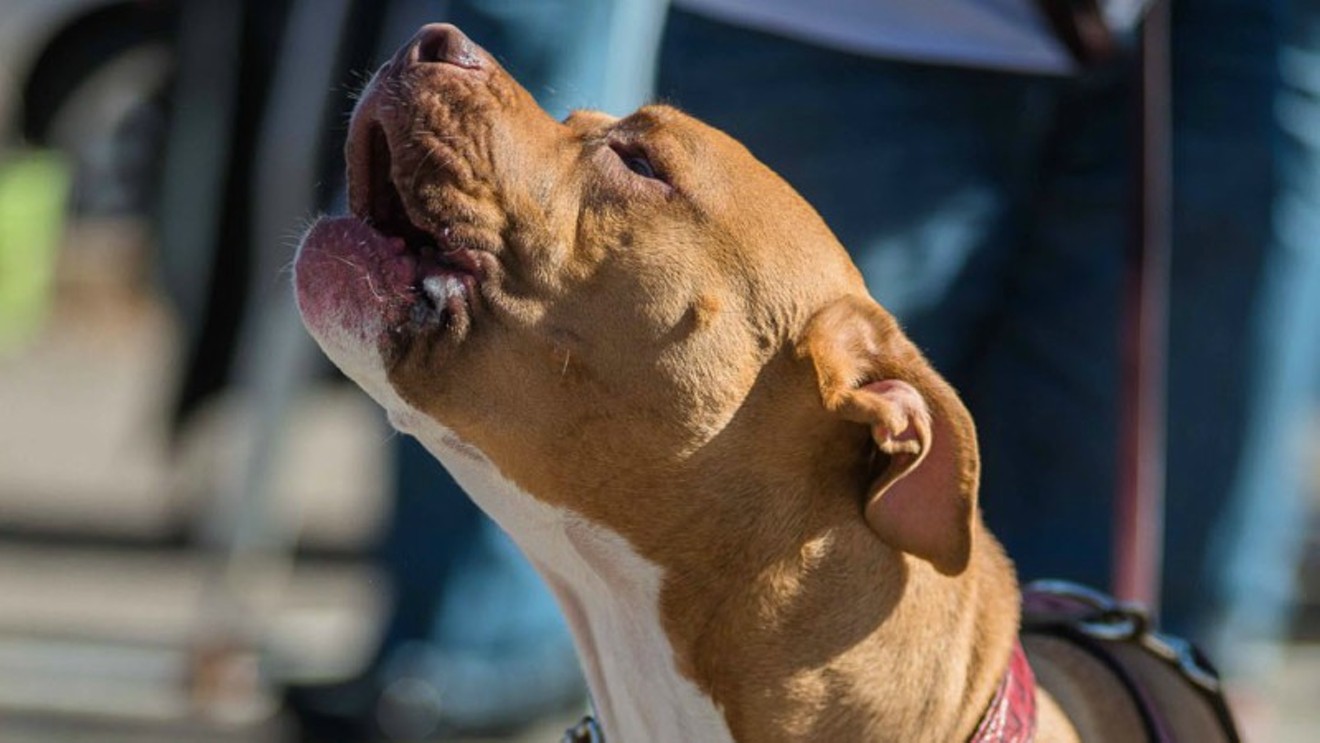 A photo from our slideshow "Parade of Pit Bulls 2013." Photo by Darian Simon
On February 24, a Denver City Council majority will attempt to override Mayor Michael Hancock's veto of a proposal that would effectively end a ban on three pit bull-related breeds put in place back in 1989. That move has made the Mile High City the epicenter of a debate over what's known as breed-specific legislation — regulations that treat some types of dogs differently than others. Locally and nationally, advocates and experts are weighing in, arguing over whether such prohibitions make communities safer...or have no impact whatsoever.

What does the science say? There's no agreement there, either, despite passionate claims on both sides.

Take Paul Vranas, a Denver resident who's became a major player in the current conversation owing to his central role in a pressure campaign on Hancock and councilmembers to reject the breed-restrictive licensing proposal put forward by District 8's Chris Herndon. Among other things, Vranas created a petition titled "Denver City Council — Keep Pit Bulls Out of Denver," which has received loads of media attention and has thus far collected 572 signatures (up from 561 on February 17).

Corresponding via email, Vranas writes: "Since this bill was presented to committee last month, I have been really trying to dig deep to get to the unadulterated truth in the debate. Listening to the expert testimony at the committee meeting and at the council meeting, I was having trouble discerning where the line in the sand was drawn between 'science' and someone's opinion." As such, he's conducted what he describes as "a deep dive review of the expert testimony, as well as the scientific studies that were provided, to try to get the truth." (See the complete summary below.)

In his analysis, Vranas dissects this quote from Dr. Kendall Houlihan of the American Veterinary Medical Association: "While breed specific restrictions might seem to make sense, there's no credible evidence to indicate they are effective."

For its part, Replace Denver BSL, a group that's pushed hard for Herndon's proposal, cites Houlihan's AVMA study in a briefing book it created for councilmembers, highlighting this quote: "Owners of pit bull-type dogs deal with a strong breed stigma, however, controlled studies have not identified this breed group as disproportionately dangerous." And this one: "It has not been demonstrated that introducing a breed-specific ban will reduce the rate or severity of bite injuries occurring in the community."

This last line epitomizes a basic disconnect between the way activists for and against pit bull licensing look at research. The former argue that such a statement demonstrates that there's no proof breed bans work — so why have them? The latter counter by pointing out that there's no proof they don't work, and say it's better to be safe than sorry. 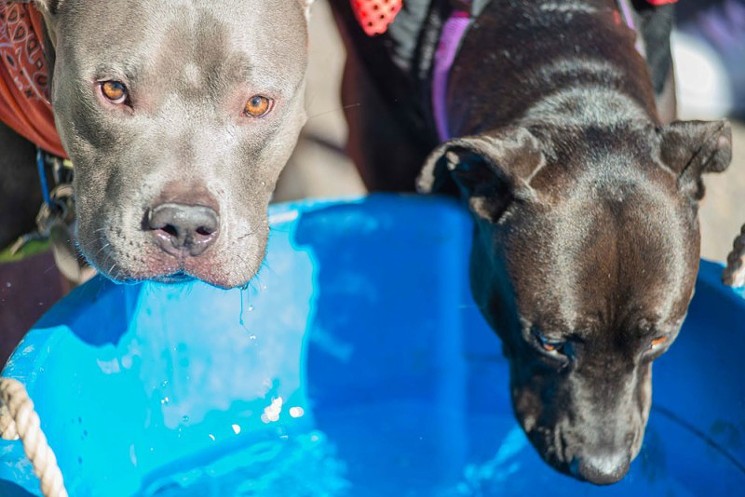 A photo from our slideshow "Parade of Pit Bulls 2013."
Photo by Darian Simon
There's lots of research on the pit bull issue that's been pulled into the discussion. In its briefing book, Replace Denver BSL cites these four studies to show that breed-specific legislation is terribly flawed:


"Breeds of dogs involved in fatal human attacks in the United States between 1979 and 1998," Centers for Disease Control and Prevention, September 2000. The authors state: "Enforcement of breed-specific ordinances raises constitutional and practical issues" and "Many practical alternatives to breed-specific ordinances exist and hold promise for prevention of dog bites."

"Is there a difference? Comparison of golden retrievers and dogs affected by breed-specific legislation regarding aggressive behavior," Journal of Veterinary Behavior Clinical Applications and Research, May 2008. The text maintains: "Comparing the results [in a test of aggressiveness] of Golden Retrievers and breeds affected by the legislation, no significant difference was found" and "A scientific basis for breed-specific lists does not exist."

"Key Findings from a Five-Year Study of Reported Dog Bite Incidents in Colorado July 2007-June 2012," Colorado Association of Animal Control Officers and Coalition for Living Safely With Dogs. According to the report, "It is not possible to calculate the bite proclivity for any breed without an accurate census of the dog population by breed, which does not exist." It advises municipalities to "enact ordinances that effectively address bite circumstances and individual dog/owner behavior."

Contrast this material with four offerings frequently mentioned by those who support breed bans like Denver's:


"Pediatric dog bite injuries: a 5-year review of the experience at the Children's Hospital of Philadelphia" by A.E. Kaye, J.M. Belz and R.E. Kirschner, August 2009. Data cited in the report shows that almost 51 percent of dog bites during the half-decade in focus were by pit bulls. Rottweilers were responsible for nearly 9 percent of the bites, and another six were linked to mixes of these breeds.

"Dog Bite-Related Fatalities: A 15-Year Review of Kentucky Medical Examiner Cases" by Lisa B.E. Shields, Mark L. Bernstein, John Hunsaker III and Donna M. Stewart, September 2009. A segment from the abstract reads: " According to The Humane Society of the United States, more than 300 individuals died of dog attacks in the United States between 1979 and 1996. Children under 12 and elders over 70 years represent the typical victims. Pit bull-type dogs, Rottweilers and German Shepherds constitute the majority of canines implicated in these fatalities." That proved true in Kentucky as well.

"Mortality, mauling, and maiming by vicious dogs" by J.K. Bini, S.M. Cohn, S.M. Acosta, M.J. McFarland, M.T. Muir, J.E. Michalek and TRISAT Clinical Trials Group, April 2011. Summarized results from a fifteen-year study at a Level 1 trauma center: "Our Trauma and Emergency Surgery Services treated 228 patients with dog bite injuries; for 82 of those patients, the breed of dog involved was recorded (29 were injured by pit bulls). Compared with attacks by other breeds of dogs, attacks by pit bulls were associated with a higher median Injury Severity Scale score, a higher risk of an admission Glasgow Coma Scale score of 8 or lower, higher median hospital charges, and a higher risk of death (10.3 percent vs. 0 percent)."

"Pediatric Dog Bite Injuries in Central Texas" by Jasson T. Abraham and Marcin Czerwinsk, Texas A&M University Health Science Center in Temple, Texas, published in the Journal of Pediatric Surgery, July 2019. A summary segment: "One-hundred and two patients met the inclusion criteria. The mean age was 5.84?years, and 43.1 percent were preschool-aged (2–5?years). Parental presence was reported in 43.6 percent of cases, and most attacks occurred in the evening (46.8 percent). Injuries often involved the head-neck region (92.1 percent), and 72.5 percent were of major severity. Pet dogs were responsible for 42 percent of injuries, and pit bull was the most-identified breed (36.2 percent)."

Studies on both sides provide fodder for plenty of debate by pit bull lovers and loathers alike. Expect the conversation to only grow louder until the February 24 vote — and no matter the outcome, the debate won't die down anytime soon.

Click to read Paul Vranas's analysis of expert testimony and evidence about pit bulls presented to Denver City Council.
KEEP WESTWORD FREE... Since we started Westword, it has been defined as the free, independent voice of Denver, and we'd like to keep it that way. With local media under siege, it's more important than ever for us to rally support behind funding our local journalism. You can help by participating in our "I Support" program, allowing us to keep offering readers access to our incisive coverage of local news, food and culture with no paywalls.
Make a one-time donation today for as little as $1.