This four-bedroom, three-bathroom, 2,318 square foot house at 4543 East Arkansas Avenue is listed at $799,000, slightly over the average price for a detached home in Denver right now. Google Maps
The April market trends report from the Denver Metro Association of Realtors, released today, April 5, amplifies a trend that's developed over the early months of 2022. The new average price for a detached home in the Denver area jumped by nearly $60,000 over the course of a single month; it currently resides just south of $800,000.

This increase occurred despite a significant increase in the number of new listings — and the percentage by which the typical offer exceeded list price rose, too.

The DMAR figures reveal that 4,332 detached homes hit the market in March, the most recent month for which statistics are available. That's a 48.87 percent bump from February and a 7.15 percent hike over this time in 2021. Similarly, closed sales went from 2,354 in February to 3,088 in March, a 28.40 percent month-over-month change, albeit a 6.99 percent dip from March of last year. But these figures are low when viewed historically.

A graphic from the report, which runs from January 2008 to January 2022, puts the assorted factors in perspective. The yellow line corresponds to active listings at the end of each month, while the blue line shows sales that closed over the same periods: 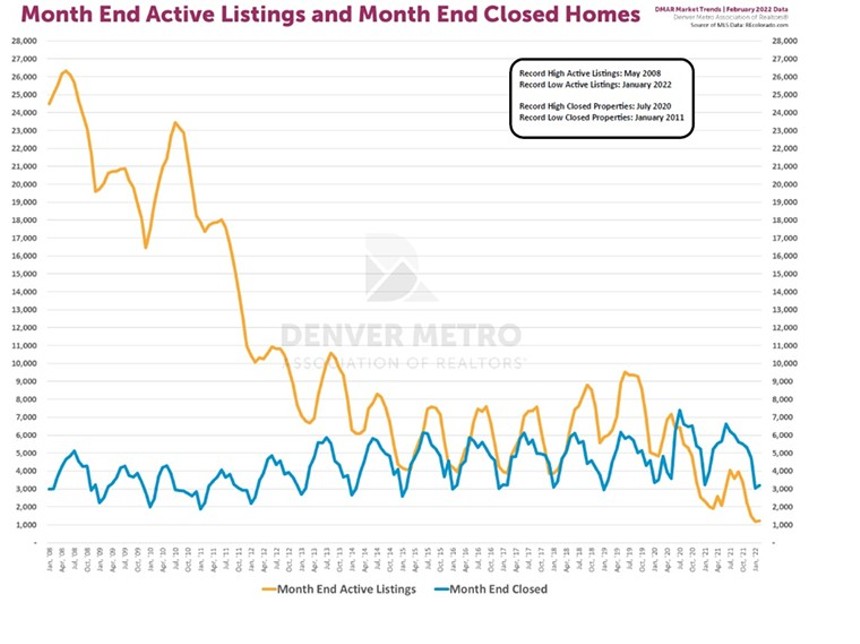 Detached homes weren't available for long — four days on average, a span unchanged from the previous month. Meanwhile, the median length of time before a sale in March was eleven days, down from fourteen in February and sixteen a year earlier. And the average closing price last month was 106.73 percent of list; in February, it was 105.11 percent.

Andrew Abrams, chair of the DMAR market trends committee, as well as a local realtor, contends that a larger stock of houses for sale has made the buying experience somewhat less stressful than implied by the latest data.

"Earlier in the year, buyers offered six figures above the asking price while competing with dozens of offers. With the recently increased inventory, it is more common to compete with just a few offers," he says. "But although competition has loosened, the residential real estate market has always been slow to react to change. Even with only a few competitive offers, it’s become standard for buyers to come in very aggressively on offers, making the other offers start at an elevated price and terms." As a result, he concludes, "the monthly mortgage of a traditional buyer has never been higher."

Click to read the Denver Metro Association of Realtors' April 2022 market trends report.
KEEP WESTWORD FREE... Since we started Westword, it has been defined as the free, independent voice of Denver, and we'd like to keep it that way. With local media under siege, it's more important than ever for us to rally support behind funding our local journalism. You can help by participating in our "I Support" program, allowing us to keep offering readers access to our incisive coverage of local news, food and culture with no paywalls.
Make a one-time donation today for as little as $1.