Where in Metro Denver Rents Have Risen the Most

The Montane, at 18301 Cottonwood Drive in Parker, offers apartments ranging from studios to three bedrooms. Prices begin at $1,634 and top out at $6,963. Google Maps
Rent prices in most of metro Denver fell slightly last month, as is common at this time of year. But over the course of 2021, rents have risen sharply almost everywhere in the greater Mile High, with several suburbs posting even larger spikes than Denver itself.

The December rent report from Apartment List reveals that rent within Denver city limits slid by 0.4 percent from October to November, the most recent month for which numbers are available. But over the past twelve months, Denver rents have gone up a gulp-inducing 17.1 percent.

If it's any consolation, the average rent increase nationally for this period is 17.7 percent. Moreover, the November decline is the first time in nine months that Denver rent prices have dipped even slightly.

Here's a graphic that compares rent in Denver to prices in Colorado as a whole and the U.S. generally.

apartmentlist.com
In November, the median price for a one-bedroom apartment in Denver landed at $1,490, with the two-bedroom median at $1,820.

As for the year-over-year percentage gains, the smallest bump took place in Brighton, which rose by 12.1 percent. The growth in northern suburban locations such as Arvada (14.3 percent), Thornton (15 percent) and Westminster (16.5 percent) was also below Denver's.

The spendiest municipalities? Parker, with an 18.1 percent annual upswing, followed by Aurora and Littleton, tied at 17.7 percent.

Here's a chart with the latest details: 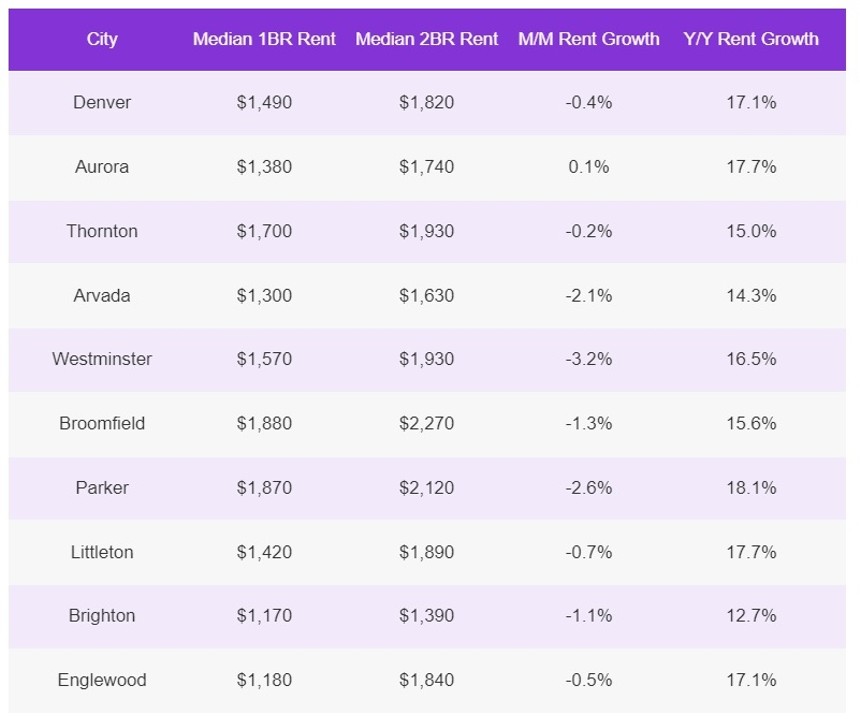 apartmentlist.com
Rents tend to go down during this season in part because few people want to be relocating in the bitter cold, when there's ice and snow on the ground. That's obviously not a problem this year — not yet.
KEEP WESTWORD FREE... Since we started Westword, it has been defined as the free, independent voice of Denver, and we'd like to keep it that way. With local media under siege, it's more important than ever for us to rally support behind funding our local journalism. You can help by participating in our "I Support" program, allowing us to keep offering readers access to our incisive coverage of local news, food and culture with no paywalls.
Make a one-time donation today for as little as $1.