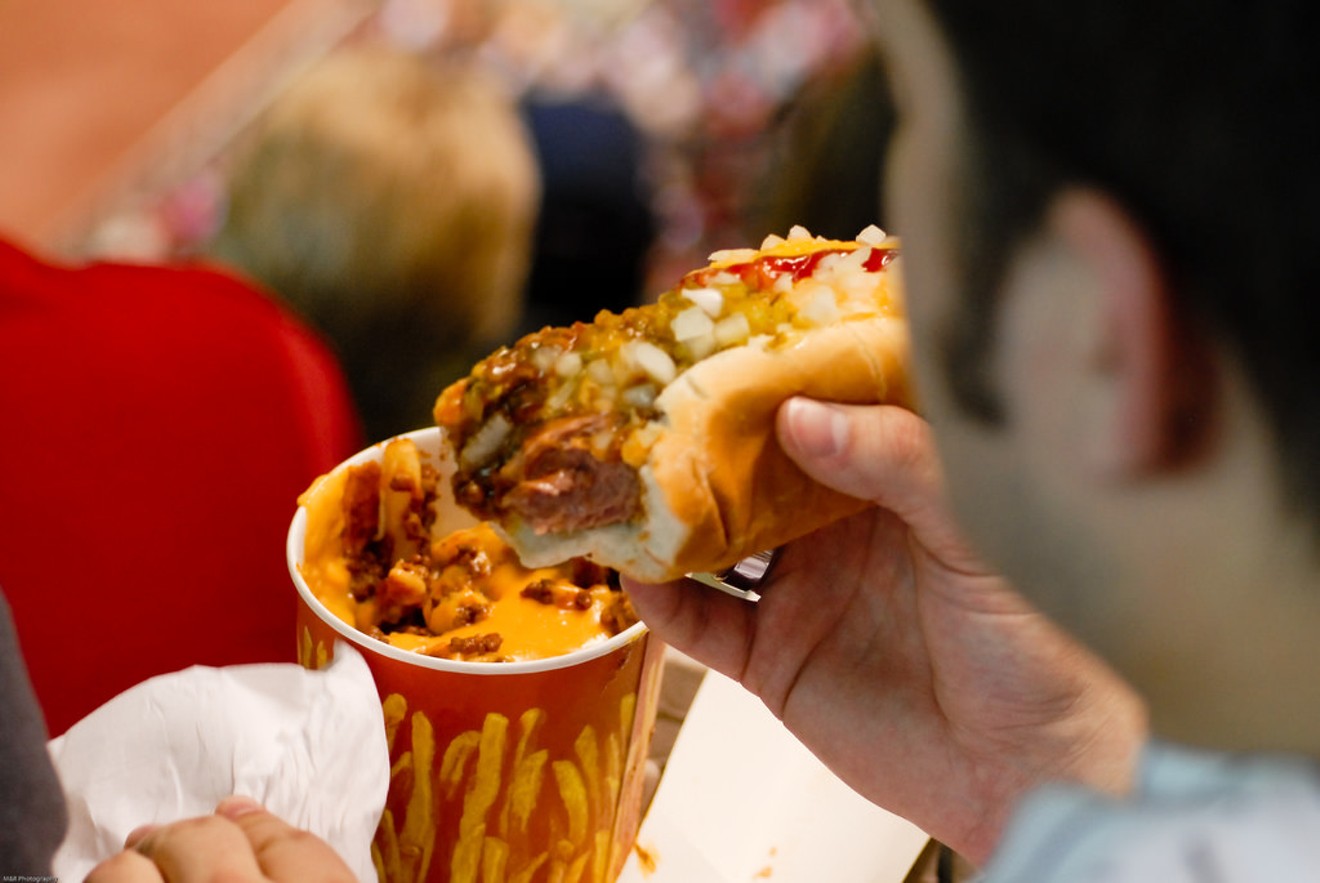 Hot dogs: among the things we desperately want to remain a mystery. M&R Glasgow at Flickr
ESPN released some alarming data last week for sports fans who attend games at their local arenas and ballfields: What's happening off the field is much more frightening than the official action. Out of almost 17,000 inspections, 28 percent had “high-level violations" that brought with them an increased risk for foodborne illnesses. Makes you think of good ol’ Broncos fever in a whole new way, right?

The situation is serious across the country, and Denver's venues rated close to the bottom. The stats made us wonder what other health-related risks might be lurking in the corners of our favorite arena around the Mile High. Here's a modest list of things to avoid next time you’re out at the old ball game:

Health tip: If your hot dog points at you, do not eat it.
Erik Drost at Flickr
Rocky Flats Dogs
It’s one thing to have regional loyalty, but Rockies Dogs are probably plenty bad enough for the diet. If we brought in livestock raised near Rocky Flats...well, that would be a pretty inadvisable idea, though the motto “The meat that makes you glow inside and out” does have a certain ring to it.

Well, it did back in 1977, anyway.
Andrew Filer at Flickr
Surplus Orange Crush From 1977
A vaunted defense worthy of its own name is one thing, but no one considered what the shelf life of soda might actually be. Forty-year-old pop might be problematic, but on the bright side, it’s still formulated with something the ancients used to call “sugar,” which we’ve long since abandoned in lieu of chemicals that taste just like it, sorta.

Nacho Cheese: Semi-Liquid Surrender
Navin75 at Flickr
Nacho Cheese
Yes, that’s it. Just nacho cheese. The health issues are built in. In 1982, the FDA required that this warning be put on all cans of nacho cheese: “If you’re reading this, we give up. You’re on your own.”

Hubert Figuiere at Flickr
Spilled Beer
We can argue about the quality of beer, how cold it might be, whether overindulgence is an issue, all of that. But really, spilled beer is by far the biggest risk one incurs while imbibing. After all, accidentally dumping a foamy one down the back of the wife of the guy sitting in front of you might get you seriously hurt.

Buy me unagi and salmon skill roll...I don't care if I never get full...
Juanpa Calvo at Flickr
Sushi
If there’s one thing that sports arenas just shouldn’t mess with, it’s raw fish. In fact, unless it's high-quality, seafood shouldn't be anywhere near the middle of the country, a mile above sea level (you know, where most fish come from). No, it doesn’t make it better if it’s sports-themed, like a Rockies Roll that contains peanuts and crackerjack, or a Broncos roll that has orange salmon with dyed-blue rice. All of that is worse. So much worse.

There are things that should be in sandwiches, and things that should not be in sandwiches.
CW Fins at Flickr
The Rocky Mountain Oyster Po’Boy
This dish was unfortunately new to Coors Field in 2018 (and available in non-sandwich form since the early years of Coors Field), but...no. We just covered the inarguable fact that no one in a Colorado ballpark should be eating oysters, let alone this kind. If you want to impress people by eating things you shouldn’t (which means you’re probably also in third grade, and really shouldn’t be reading this at recess), go on Fear Factor.

Stray hair: another argument in favor of the inevitable robot overlords.
Aidan Jones at Flickr
Hair, Hair, Everywhere
In the hipster haven that is today’s Denver, we probably need to stop pretending that stray hairs in our various food items are always coming from the cook or server’s scalp. More likely it’s from their beard, which only gets washed when it starts to offend passersby. Hair nets? Too old-school. Beard nets? Silly. New uniform: sports-themed hazmat suits.

Ketchup is generally dispensed in measurements we call "splurts."
Dan Keck at Flickr
Public Dispensers
It's probably a terrible idea to put out unattended stands of condiments and expect that they might remain safe for human consumption. Granted, mustard lasts forever, ketchup less so, but we should probably swap them out and clean the spouts on more than an annual basis. Also, who was the brainiac who thought that open trays of raw onion and relish were a good idea? It’s like putting a salad bar out on the 16th Street Mall.

One does not go to a ballgame in order to have a beer and a berry stick.
Marco Verch at Flickr
Strawberries on a Stick
These things have got to go. Not because the chocolate-drizzled things are unhealthy. Just because they’re dumb.

M&R Glasgow at Flickr
Actually Watching the Games
Seriously — here in Denver, it’ll just spike your blood pressure.
KEEP WESTWORD FREE... Since we started Westword, it has been defined as the free, independent voice of Denver, and we'd like to keep it that way. With local media under siege, it's more important than ever for us to rally support behind funding our local journalism. You can help by participating in our "I Support" program, allowing us to keep offering readers access to our incisive coverage of local news, food and culture with no paywalls.
Make a one-time donation today for as little as $1.