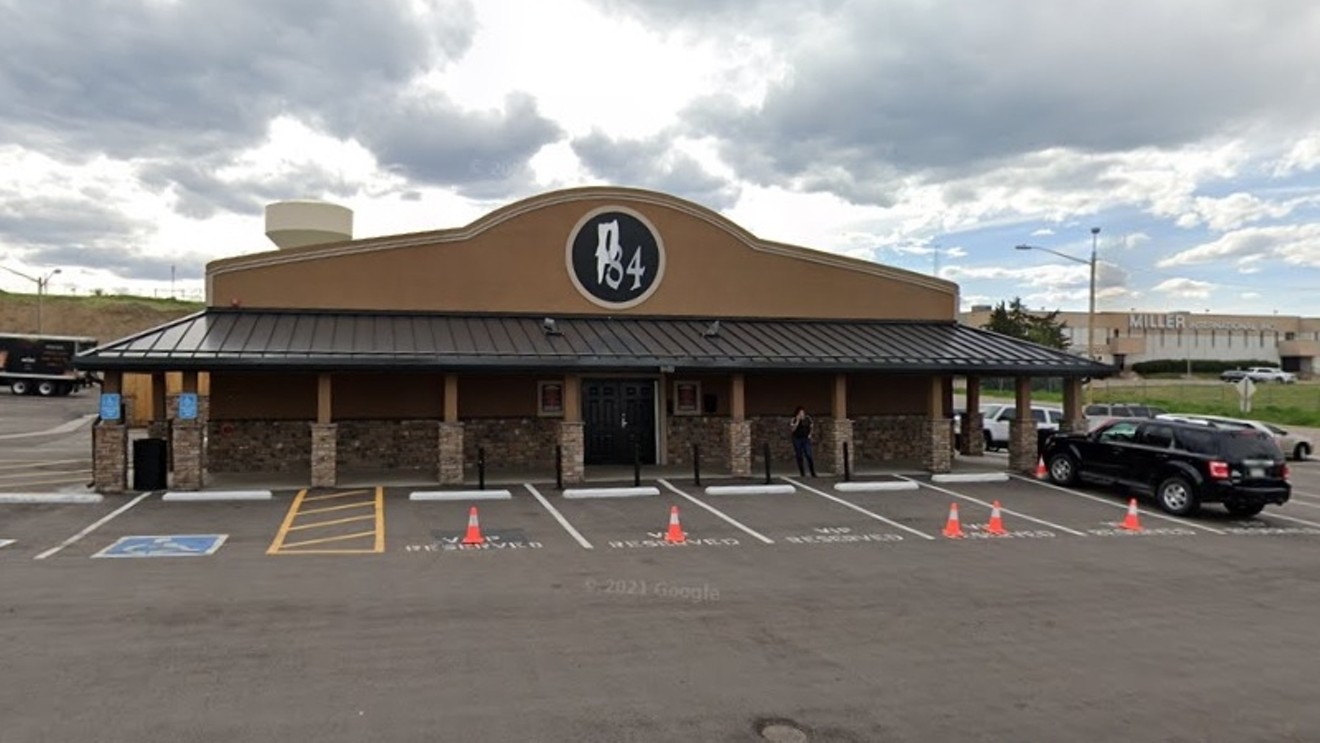 Platinum 84 is located at 8485 Umatilla Street in Federal Heights. Google Maps
Of Westword's recent list of sixteen killings or attacks at Colorado strip clubs since 2011, two happened in or near Platinum 84, at 8485 Umatilla Street in Federal Heights. However, a third incident at the establishment has now come to light — a shooting two years ago that led to a recent lawsuit against the venue and its parent companies.

Neither the plaintiff, Paul Sedlmayer, nor his attorney, Russell Araya of Ramos Law LLC, would comment beyond the information in the complaint, filed February 11 in Denver District Court. Representatives of Platinum 84 and affiliated firms Crosscheck LLC and Mideast Mountain Communications Inc. have not responded to Westword.

The two previous violent episodes at Platinum 84 took place nearly eight years ago within weeks of each other. On August 13, 2014, two customers were shot at the club but survived after a fight erupted in gunfire at around 1:45 a.m. The next month, on September 27, a man who was asked to leave the club initially refused to do so, resulting in a call to the Federal Heights Police Department. A responding officer was injured while trying to pull the man off what was described as a "bachelor party bus."

No other offenses at Platinum 84 have generated big headlines since then, but Mike Domenighini, the FHPD's interim police chief, confirms that the address is well known to his officers. As he puts it, "We certainly do have records of activity at that location."

The lawsuit's account begins at approximately 1:30 a.m. on October 10, 2020, when members of Platinum 84's security staff are said to have "observed a physical and verbal altercation between pugnacious and intoxicated patrons," including Sean Garcia Chavez, who's also listed as a defendant.

Shortly thereafter, according to the complaint, security personnel tried to physically remove Garcia Chavez and what's referred to as his "entourage" from the premises. At that point, "Defendant Garcia drew a handgun from his belt line, positioned himself into an 'A-frame' shooting stance, chambered a round, aimed the handgun and discharged several rounds, hitting an innocent bystander" — Sedlmayer, who was struck in the left leg.

Garcia Chavez was prosecuted by the 17th Judicial District DA's Office, which serves residents of Adams and Broomfield counties. Spokesperson Christopher Hopper confirms that "Mr. Garcia Chavez pled guilty to first-degree assault — extreme indifference on August 27, 2021. The judge in this case sentenced him to sixteen years in the Department of Corrections to be followed by three years of mandatory parole."

This sentence didn't settle matters from Sedlmayer's perspective. His complaint argues that "the corporate defendants knew of myriad prior disturbances and violent activities at their premises and other clubs like it," and as a result, "they were on notice that they owed a duty to their patrons to provide sufficient, adequately trained security, and further owed a duty to their patrons to protect their patrons from violent criminal activity taking place in and around their premises."

The suit claims that the club and its owners "negligently breached their collective duty by not having in place proper security practices and procedures to prevent foreseeable disturbances and violent activities like the...shooting, and in that capacity negligently created a dangerous condition, and otherwise knowingly allowed foreseeable violent acts to occur during which an innocent person like [Sedlmayer] would be shot and injured by a violent patron."

Click to read Paul Sedlmayer v. Platinum 84, et al.
KEEP WESTWORD FREE... Since we started Westword, it has been defined as the free, independent voice of Denver, and we'd like to keep it that way. With local media under siege, it's more important than ever for us to rally support behind funding our local journalism. You can help by participating in our "I Support" program, allowing us to keep offering readers access to our incisive coverage of local news, food and culture with no paywalls.
Make a one-time donation today for as little as $1.