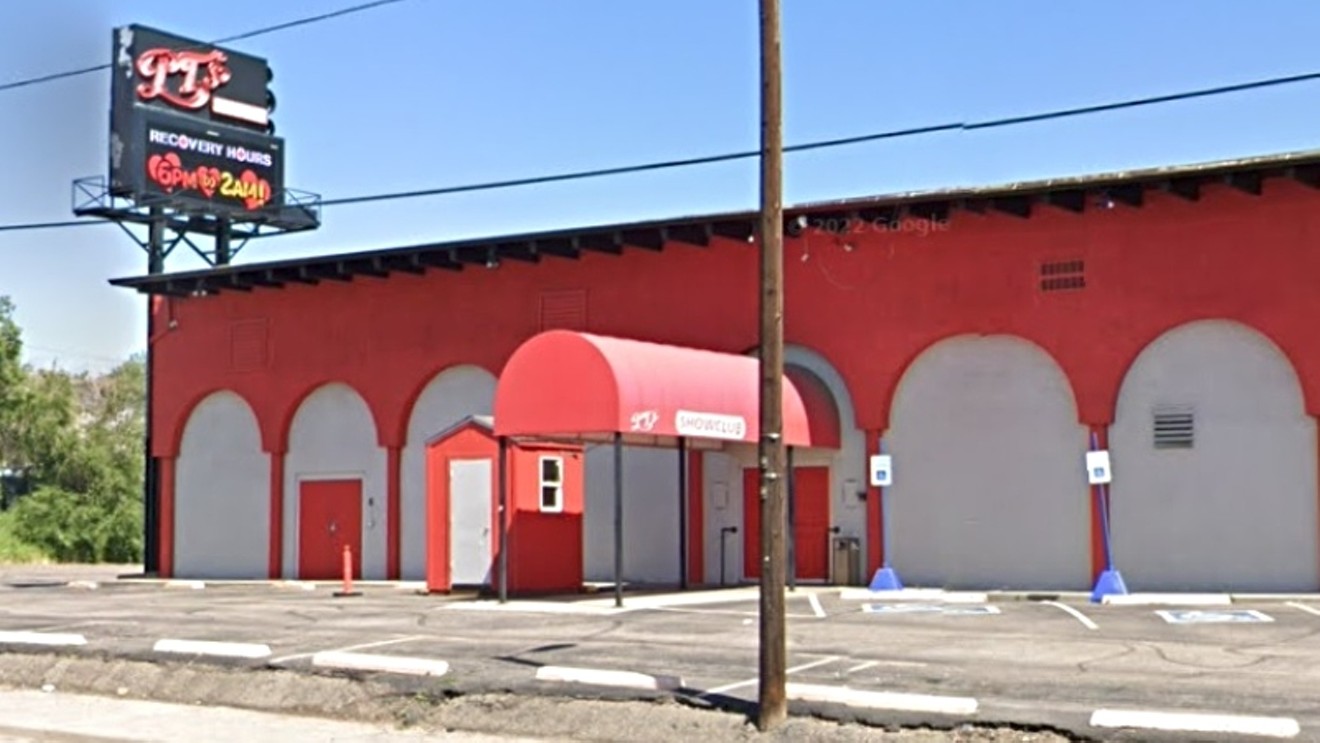 PT's Showclub, at 1601 West Evans, has been the setting for multiple shootings in recent years. Google Maps
Two events last week focused renewed attention on Colorado strip clubs as the settings for violent crimes: a double shooting that the Denver Police Department confirms took place near PT's Showclub, 1601 West Evans Avenue, and the successful prosecution by the Denver District Attorney's Office of 44-year-old Ryan Ashland for using a baseball bat to kill one person and seriously injure three others at the same venue back in April 2019.

Since 2011, at least sixteen killings, attacks or deaths have taken place at or near strip clubs in Colorado, with the overwhelming majority occurring in the greater Denver area.

Continue to get the basics on those sixteen incidents, many with links to Westword's original coverage. They're listed in chronological order and include location information and descriptions of what went down. Note that PT's Showclub — in a building that once housed the Family Dog, a storied music venue in the late ’60s — makes multiple appearances, as do several other businesses.

August 13, 2014
Location: Platinum 84, 8485 Umatilla Street, Denver
Two customers were shot at the club but survived after a fight erupted in gunfire at around 1:45 a.m.

A man who was asked to leave the club initially refused to do so, resulting in a call to the Federal Heights Police Department. A responding officer was injured while trying to pull the man off what was described as a "bachelor party bus."

March 4, 2015
Location: Fantasy Gentleman's Club, 2258 Colex Drive, Grand Junction
A customer was stabbed after accidentally getting into the wrong vehicle.

Armed gunmen broke into the club just after 6 a.m., causing a cleaning crew to flee. SWAT officers and other law enforcers responded, but what appeared to be a barricade situation ended when it was learned the suspects had escaped.

One dancer stabbed another outside the club. The victim survived her wounds.

A man was killed outside the club after getting into an argument with a fellow patron named Stephen Futrell, who was convicted of murder and sentenced to 35 years in prison the following year. The venue was subsequently purchased by the City of Denver in March 2021 to be turned into an affordable-housing complex.

A man was shot outside the venue during the early-morning hours. He survived.

A man shot at the venue was later pronounced dead at a local hospital.

Just after 4:30 a.m., three men who'd been ejected from the venue returned to the club several hours later and fired shots at a guard, who responded by returning fire. One of the men died in the exchange.

A man denied entrance to the club returned and shot an employee, who suffered non-life-threatening injuries.

Junior Izaguirre Gamez, 35, was fatally shot in the venue's parking lot. Jared Chavez was ultimately convicted of the crime and sentenced to life in prison without the possibility of parole.

Matthew Fanelli's alleged multi-state crime spree began when he fired multiple shots at DejaVu employees. No one was injured at the club, but Fanelli was later accused in the murder of an Uber driver in Denver.

Randall Wright, a 48-year-old executive with Kroger, parent company of King Soopers, died after a venue employee placed him in a chokehold following a confrontation with another customer. The guard wasn't criminally charged, but Wright's family filed a wrongful-death lawsuit that's currently scheduled for trial on November 7.

Two people were shot in an incident that took place outside PT's and at a parking lot across the street. No arrests have been announced. Anyone with information about the crime can contact Metro Denver Crime Stoppers at 720-913-STOP (7867).
KEEP WESTWORD FREE... Since we started Westword, it has been defined as the free, independent voice of Denver, and we'd like to keep it that way. With local media under siege, it's more important than ever for us to rally support behind funding our local journalism. You can help by participating in our "I Support" program, allowing us to keep offering readers access to our incisive coverage of local news, food and culture with no paywalls.
Make a one-time donation today for as little as $1.