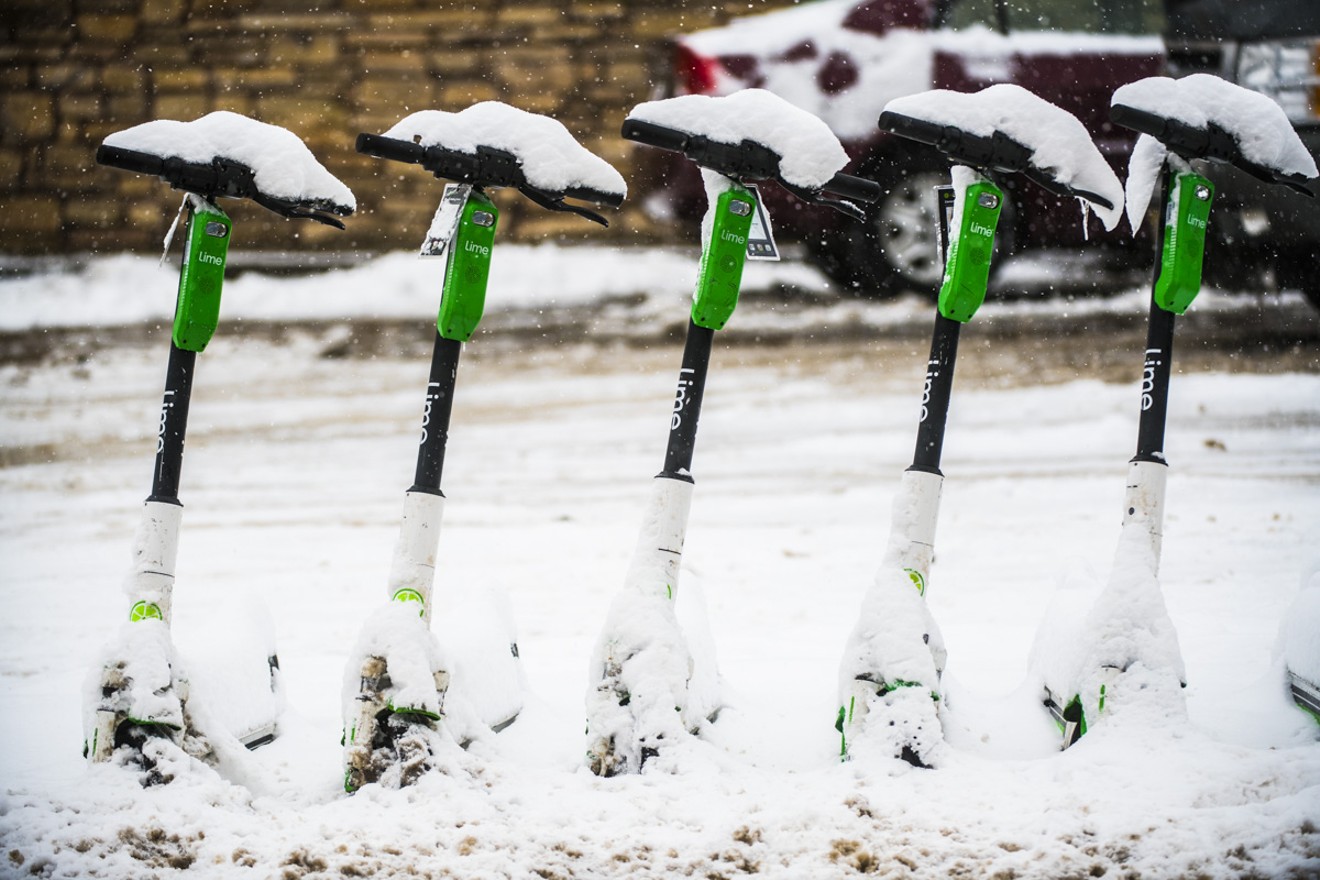 Park wisely. Evan Semón
Pissed off about people acting like jackasses when they park their scooters, a vigilante has started blotting out the QR codes on those scooters, which makes them inoperable since would-be users need to scan the QR code with their phones to unlock the scooters.

The unidentified vigilante's work popped up May 19 on the Denver subreddit when user PatsBruinsSoxCelts posted a photo of a successful operation in which the QR code on a scooter was blocked by what appears to be permanent marker.

Next to the disabled QR code is a sticker that reads:  "Per city code: All vehicles must be parked in a manner that does not impede clear paths or access in the right of way (sidewalk area or street) or block the boarding or departure of transit users. ... This scooter/bike was incorrectly parked, resulting in the QR code being obscured. Contact Lyft or Lime if you wish to use this vehicle. We are sorry for your inconvenience but unfortunately, some people suck and do are not considerate of how other people use sidewalk."

Westword has reached out to Lyft, Lime and the Department of Transportation and Infrastructure for comment, but has not yet received replies.

Reddit user PatsBruinsSoxCelts found the tagged scooter around 4 p.m. on May 19, right by 27th Street and Walnut Street in RiNo, snapped a photo and then posted it to the Denver subreddit with the caption "The war on scooters!"

"I just can’t imagine how someone is so worked up about that that they’re actively carrying those stickers and a black Sharpie like that's the answer," PatsBruinsSoxCelts tells Westword.

Plenty of scooter users park properly once they're finished. But there are also many people who use scooters and leave them in the middle of the sidewalk, which creates an obstacle for individuals using wheelchairs, parents pushing strollers and even pedestrians walking. A scooter bandit has been patrolling the streets of Denver.
Reddit
Scooters from companies like Bird, Lime and Lyft began popping up in Denver in 2018 without much notice; suddenly, scooters were zipping by on sidewalks and streets and in bike lanes. Since then, Denver City Council has regulated where scooters can be used, and the City of Denver also has entered into licensing agreements with Lyft and Lime to be the sole scooter and shared e-bike operators in Denver.

Per Denver ordinance, scooters and e-bikes can only be ridden where regular bikes are allowed to go and "should not be ridden on sidewalks unless actively parking, starting, or ending a trip," the Department of Transportation and Infrastructure states on its website.

"If riding on sidewalks to start or end a trip, users must yield to pedestrians, announce themselves when approaching from behind, and operate at speeds not to exceed 6 miles per hour," DOTI says, adding that people must "obey all traffic laws, signs and signals, and never ride under the influence of drugs and/or alcohol.'"

And, most important to the bandit, city law requires that users "park shared micromobility vehicles like you would a personal bike or car, and avoid parking in the middle of sidewalks, curb ramps, transit stops/stations, trails, streets, or anywhere else that impedes pedestrian access."
KEEP WESTWORD FREE... Since we started Westword, it has been defined as the free, independent voice of Denver, and we'd like to keep it that way. With local media under siege, it's more important than ever for us to rally support behind funding our local journalism. You can help by participating in our "I Support" program, allowing us to keep offering readers access to our incisive coverage of local news, food and culture with no paywalls.
Make a one-time donation today for as little as $1.