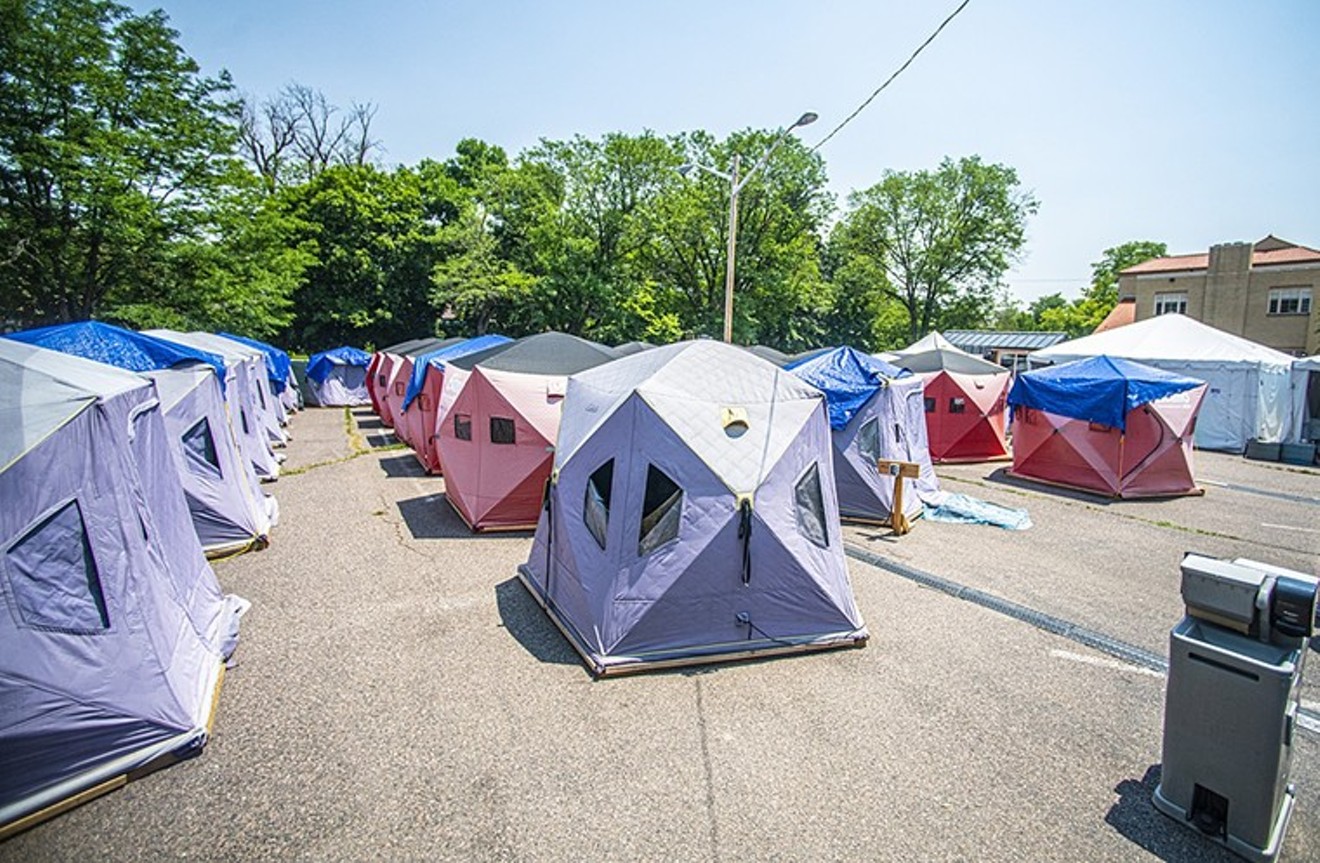 Initiative 303 took aim at safe-camping sites as well as unofficial encampments. Evan Semon
The Denver Republican Party, which has little influence in the heavily Democratic Mile High City, attempted to make a splash in this year's local election. Chairman Garrett Flicker sponsored two initiatives: 303, which sought to amend the Denver camping ban by requiring enforcement within 72 hours of receiving a citizen complaint about an encampment and then allowing for that citizen to file a lawsuit if that deadline isn't met; and 304, which sought to reduce the city's sales tax.

Thanks to generous contributions from the dark-money group Defend Colorado, both initiatives easily made the ballot through paid signature-gathering. And once on the ballot, Initiative 303 generated plenty of attention, since homelessness and how the City of Denver manages unsanctioned encampments are hot-button issues. Local service providers in particular were worried that 303 would pass, as one of its provisions would have limited Denver to no more than four safe-camping sites on public property.

"I hear a lot of really dehumanizing comments, and those always come forward really loud in the conversation, whether it's about just encampments in general or about safe outdoor spaces," says Cole Chandler, executive director of the Colorado Village Collaborative, which has been leading efforts to implement the safe-camping site model in various neighborhoods across Denver. "Sometimes it's hard to know if this person is speaking for everyone or is this person speaking for themselves."

But the Denver GOP's big splash turned into a belly flop. The sales tax initiative lost handily, and although the margins were closer for Initiative 303, it's definitely behind in the current count, 44.66 percent to 55.34 percent.

Aside from drawing plenty of attention, Initiative 303 drew the legal ire of the City of Denver, which filed a lawsuit against Flicker in mid-October because of the 72-hour enforcement provision. City Attorney Kristin Bronson argued that this provision of 303 was unconstitutional, because it violated Denver's administrative authority. Judge Darryl F. Shockley of the Denver District Court agreed, and on October 31 ruled that the provision was unlawful and would not be written into Denver law if 303 passed.

After the ruling, Flicker expressed confidence that 303 would still pass, and promised to appeal the judge's ruling after the election. But voters denied him that opportunity.

"While we are disappointed in the outcome, we are grateful to have had the chance to shine a bright spotlight on the real human problems arising from Denver’s homeless crisis," Flicker says. "We are concerned that the city's last-minute lawsuit interfered with our initiative, and we are considering our legal options. While we came up short, we will continue to be part of the conversation in pushing for common-sense, fair and compassionate solutions that benefit both the unhoused men and women in our city, as well as neighbors and property owners."

Mayor Michael Hancock, who signed the camping ban into law in 2012, expressed relief that 303 failed.

"Even with the most onerous part of this measure struck down as unconstitutional by the District Court earlier this week, this measure, pass or fail, was not a solution to homelessness nor encampments," the mayor says in a statement. "I share our residents’ frustrations with unauthorized camping, and you have my word that we will continue to work tirelessly to transition our unsheltered neighbors from the streets to more stable settings."

The judge left intact 303's provision limiting the number of safe-camping sites. "I did have concerns that it might pass because it was so deceptively worded," says Cathy Alderman of the Colorado Coalition for the Homeless.

"It would've really dealt a blow to our efforts and to building momentum and raising money for safe outdoor spaces," concludes Chandler. "I was pleasantly surprised to see that, because when we're working in a neighborhood, the antagonistic voice can be so loud."
KEEP WESTWORD FREE... Since we started Westword, it has been defined as the free, independent voice of Denver, and we'd like to keep it that way. With local media under siege, it's more important than ever for us to rally support behind funding our local journalism. You can help by participating in our "I Support" program, allowing us to keep offering readers access to our incisive coverage of local news, food and culture with no paywalls.
Make a one-time donation today for as little as $1.