Next Dougco Schools Superintendent Could Be This Pro-Gun Mask Hater 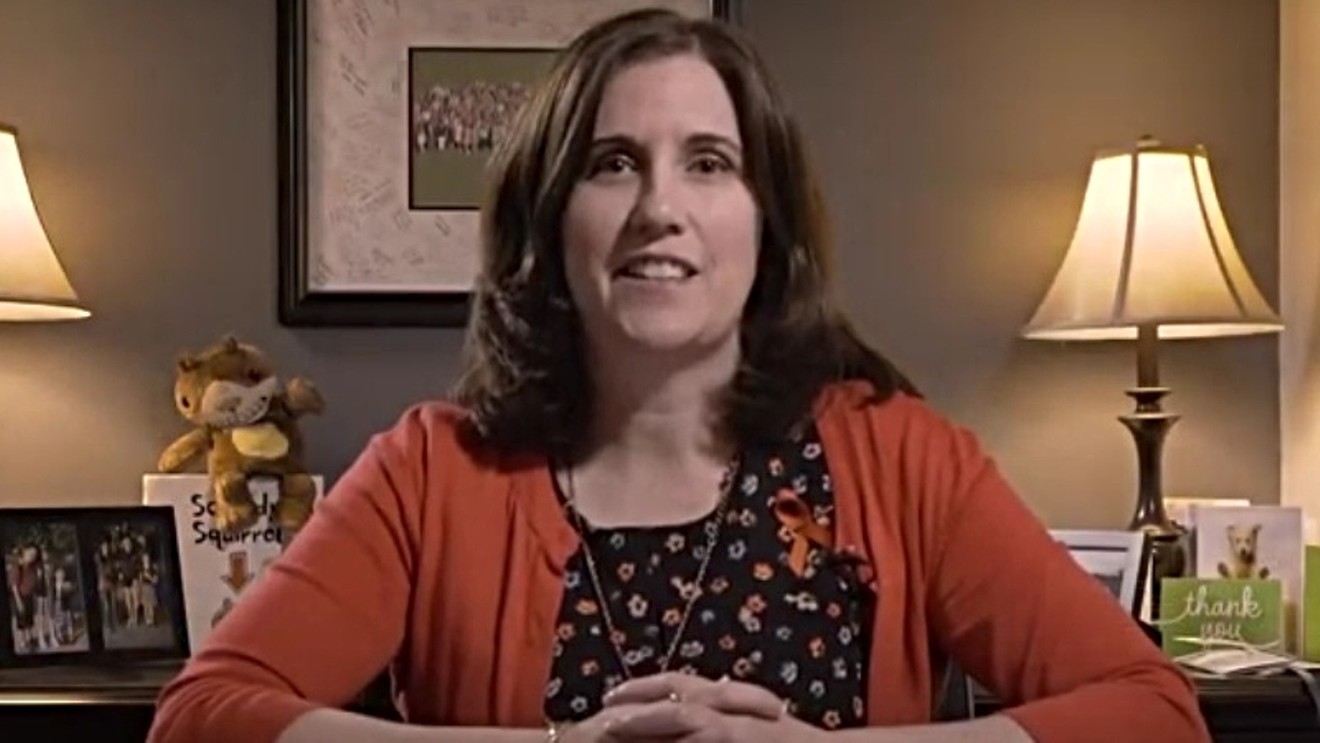 The extraordinary brevity of the timetable suggests to critics that Becky Myers, Mike Peterson, Christy Williams and Kaylee Winegar — the board's conservative-majority bloc that engineered Wise's sacking — are simply going through the motions and have already picked a replacement. The person widely rumored to be the chosen one is Erin Kane, a former interim DCSD superintendent who has argued that charter schools should be given the freedom to have armed personnel on campus and ignore mask mandates.

Kane is currently executive director of schools for American Academy, a charter institution with campuses in Castle Pines and Parker. Her school bio reads: "A Colorado native with an engineering degree in Applied Mathematics and Computer Science as well as a Master’s in Public Administration from the University of Colorado, Erin Kane spent nearly a decade in the high technology industry in project development, project management, education, consulting, and practice management. In 2004, she led the effort to found American Academy. Under Erin’s leadership as Executive Director, American Academy expanded to include additional campuses and a preschool program. American Academy now serves almost 3,000 students across three campuses in preschool through eighth grade. In 2016, Erin stepped away briefly from American Academy to lead Douglas County School District as Interim Superintendent for two years and returned to American Academy in the fall of 2018. Erin and her husband, John, have three high school and college-aged children and have been proud residents of Douglas County for over 20 years."

The interim-superintendent stint corresponded with the reign of The Reformers, Dougco school board members who made national headlines thanks in part to a controversial voucher proposal that allowed parents to use taxpayer dollars to enroll their kids at religious schools. The plan prompted a lengthy court fight that wasn't resolved until December 2017, when members of the board elected the previous month over the pro-voucher faction voted to end the program.

While at Dougco, Kane backed a policy that would have given the superintendent the power to decide which members of the district's security staff could carry guns on school grounds. The boardmembers who won election in 2017 rejected this policy, and the next year, Kane wasn't among the finalists for the permanent superintendent slot. Hence her return to American Academy, which refused to go along with in-class masking requirements imposed by the Tri-County Health Department in August 2021. At that time, Kane told Colorado Community Media that families should be given a choice about whether their child should wear face coverings to prevent administrators from being placed in a "no-win situation."

And talk about a no-win situation: On February 15, Douglas County teachers received an email informing them that the names of those who called in sick on February 3 to protest the planned action against Wise — resulting in the cancellation of classes that day for approximately 64,000 students at the district's eighty-plus schools — will be publicly revealed today, presumably during the special meeting.

"This action reeks of employer intimidation of employees for engaging in protected union activity and First Amendment activity," Douglas County resident Robert C. Marshall wrote the board — and it's not the first time he's complained about its actions. There's also a hearing at 1:30 on February 25 associated with a lawsuit Marshall filed against Myers, Peterson, Williams, Winegar and the board in general, in 18th Judicial District Judge Jeffrey K. Holmes's courtroom. The new lead counsel pressing the "motion for preliminary injunction prohibiting further violations of the Colorado Open Meetings Law" — a charge made against Myers and company by their three school-board colleagues, Elizabeth Hanson, Susan Meek and David Ray — is attorney Steve Zansberg, who leads the Colorado Freedom of Information Coalition.

The idea of releasing the names was floated prior to the walkout by George Brauchler, a onetime 18th Judicial District DA who's now a talk-show host on 710 KNUS. Here's the text of the letter teachers received yesterday:


This email is being sent to your attention since the Douglas County School District’s records indicate that you requested to be absent from work on February 3, 2022. An individual has requested this information under the Colorado Open Records Act (CORA). The specific request made appears below:

DCSD does have information responsive to this request which includes your name indicating that you submitted an absence request for February 3, 2022. This email is sent to notify you that the school district intends to respond to this request no later than close of business tomorrow, Wednesday, February 16, 2022, as required by CORA.

Concerns that board turmoil could result in a brain drain at Douglas County schools go beyond the resignation of Sid Rundle, the much-respected special education services officer who was a member of the district's cabinet; the letter announcing his decision, published yesterday by Westword, is scathing. The Douglas County School District's job page lists 413 openings as of today, and with other metro-area districts facing similar shortages (the Indeed page for the larger Denver Public Schools lists 774 available positions), teachers angered by what they may see as an act of political retribution against them will have plenty of future employment options.

This post has been updated to correct the date of a hearing related to a preliminary-injunction motion filed by Robert C. Marshall. We regret the error.
KEEP WESTWORD FREE... Since we started Westword, it has been defined as the free, independent voice of Denver, and we'd like to keep it that way. With local media under siege, it's more important than ever for us to rally support behind funding our local journalism. You can help by participating in our "I Support" program, allowing us to keep offering readers access to our incisive coverage of local news, food and culture with no paywalls.
Make a one-time donation today for as little as $1.