Fertility Doctors Who Used Their Own Sperm: Latest Colorado Connection

Dr. Marvin Yussman is the target of a lawsuit filed by Longmont's Susan Crowder. WHAS11-TV
Colorado has become an unexpected focus of legal action related to fertility doctors who used their own sperm to impregnate patients without their knowledge. The latest example: a lawsuit filed by Longmont's Susan Crowder against the University of Louisville Hospital and Dr. Marvin Yussman, a retired Kentucky physician who admitted to personally making such donations on what he described as "very rare occasions" in a letter that framed his actions as both justifiable and compassionate.

Crowder's attorney, Amy Wheatley of Stein Law, a firm with offices in Indiana and Kentucky, has a very different view of Yussman's actions, and she also doubts the accuracy of his estimate regarding the number of times he deployed his own semen for patients.

"I recently filed another complaint where Dr. Yussman is the biological father of both of this woman's children," Wheatley says. "She went to him for artificial insemination twice and he did it both times, which is one of the reasons I'm so confident there are way more than half a dozen of his biological children out there."

In the letter, written in August 2020, Yussman offered "half-a-dozen" as his best guess at the number of times during his four-decade-plus career when he took matters into his own hand — and he insisted that he only did so when other donors didn't show up at their appointed time. However, he also noted that an unnamed complainant to the Kentucky Board of Medical Licensure asserted that his parentage had been confirmed in eight cases, and he admitted, "I have no reason to challenge that number."

The issue of fertility doctors using their own sperm to impregnate patients first arose in Colorado in connection with a 2019 lawsuit against Grand Junction OB/GYN Paul B. Jones. The attendant publicity led to the passage of a 2020 law banning the practice, which hadn't previously been illegal in the state. And in April, a jury awarded $8.75 million to the suit's three plaintiffs: Cheryl Emmons, a past patient of the doctor, and her two daughters, Maia Emmons-Boring and Tahnee Scott, both of whom were conceived by way of artificial insemination at Women’s Healthcare of Western Colorado, where the doctor worked. DNA testing confirmed that Jones was the daughters' biological father.

At least one other lawsuit against Jones, filed on behalf of three individuals referred to in court documents as Jane, Janet and Jana Doe, is still pending. In May, their attorney, Paula Greisen of Denver-based King Greisen, described Jones's actions as "essentially the medical rape of the mother."

Here's how Wheatley describes the situation behind Crowder's lawsuit, filed on July 14:

"Ms. Crowder used to live in Hopkinsville, Kentucky," she notes. "Her husband was a physician, and he was doing his residency there — and in 1975, they went to see Dr. Yussman, who was one of the only people doing artificial insemination in the area. Frozen sperm was in use back then, but they preferred to use fresh samples. The way it worked was the patient would be coming in the front door as the donor would be coming in the back. The donor would give a sample, it would be spun down, and then it would be taken to the patient in another room, and she would be inseminated."

According to Wheatley, Crowder "was told the donor would be an anonymous medical student. She asked for someone who looked similar to her husband: similar features, similar build, that type of thing. And she was inseminated and got pregnant and never thought anything about it until her daughter took a 23andMe test and was contacted by someone who was another of Dr. Yussman's offspring — and I use that term because it's the one he uses." 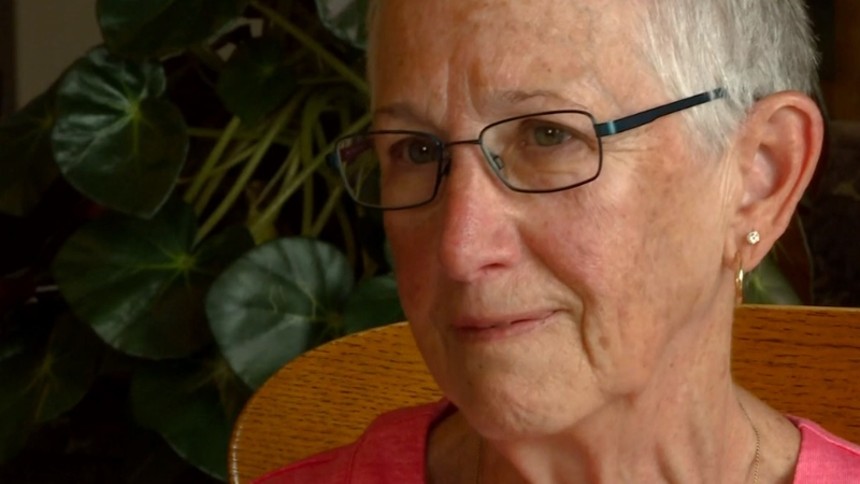 Susan Crowder as seen during a recent interview.
Courtesy of 9News
The discovery was made in 2019, and Crowder soon learned that Kentucky's criminal code, like Colorado's, didn't forbid what Yussman had done. "There was no law against it, and it had happened so far in the past that most statutes of limitation weren't applicable," Wheatley acknowledges. "So Ms. Crowder tried to contact the University of Louisville Hospital, where this doctor was a professor, and was told he had retired. She then tried to file a complaint with the medical licensure board, but they said there was no evidence Dr. Yussman had violated any type of malpractice standards. And even more disturbing, the head of the university's medical school actually called her and asked her to drop her complaint. She was basically brushed off."

These rejections didn't stop Crowder, Wheatley continues. "She wrote a letter to the Kentucky legislature and was instrumental in getting a new law passed" — House Bill 402, also known as the Fraudulent Assisted Reproduction Act. "It went into effect in July, and after it did, she filed the first lawsuit under that law."

Westword reached out to the University of Louisville Hospital for comment about the lawsuit, as well as the assertion that the head of the facility's medical school had personally called Crowder to ask that she rescind her complaint against Yussman, who remains a presence on its website; a 2016 post describes him being given the Dean's Education Award for Distinguished Educator. In response, spokesperson David McArthur offered the following statement: "UofL Hospital is sympathetic to those who have been impacted by recent news of these events and respect the wide range of emotions the patient and her children may feel. In 1975, the fertility clinic was an independent clinic not associated with, or part of, UofL Hospital. Marvin Yussman is not a physician with our organization. The medical practices the Plaintiff alleges are not procedures that UofL Hospital would condone."

In his letter, Yussman expressed no regret for using his own sperm for fertility patients. Far from it: He notes that he had been contacted by three individuals who'd learned he was their biological father, and all of them "expressed gratitude for their existence and even proudly sent me photographs of their children."

This opinion has been repudiated in a big way, Wheatley points out: "The new law that Ms. Crowder inspired passed unanimously. There wasn't a single vote against it, and I think that's really important in this day and age. When we are so polarized politically, the fact that you get Republicans and Democrats to agree unanimously that this conduct is wrong and should be actionable is pretty significant."


This is in response to your request for information regarding KBML Grievance #15225.

I do not recall Mrs. Crowder's case specifically since 40+ years have passed and the records are no longer available. However, I have no reason to doubt much of [deleted] recollections. I did run a large artificial donor insemination program starting in the 1970s. The semen donors for that program were mostly medical or dental students although occasional resident physicians and faculty members were also recruited as donors. The reason for local donors was because sperm banking was just beginning and was completely unregulated. I purposely visited one of the national sperm banks and discovered that there was very little control of the specimens and little knowledge of the donors. I therefore decided that I would continue with local donors whom I could meet, interview and check for diseases and obtain a history of inheritable abnormalities.

The program was set up so that fresh specimens would be used whenever possible although the office maintained a small collection of frozen specimens. A donor was instructed to come to the office to collect a specimen just prior to the patient's insemination. If the donor did not show, an appropriate frozen specimen would be used if available. On very rare occasions when the donor did not show and no frozen specimen was available, I used my own sperm if I otherwise would have been an appropriate donor: appropriate blood type, race, physical characteristics. My recollection is that such circumstances occurred only about a half dozen times in the many years of the program. [Deleted] states that there are, in fact, a total of 8 such offspring. I have no reason to challenge that number.

[Deleted] states that I told her that the donor would be a medical student. Of course I cannot recall a 40-year-old conversation. However, my usual information to patients was that the donor would be a medical student, dental student, resident physician or other physician associated with the medical school. I cannot imagine that I ever would have told a patient that the only potential donors were medical students, and I would never have told a patient that sperm that I personally donated was from a medical student. Residents and faculty members did in fact serve as donors, including me. I would have been an acceptable donor in any artificial insemination program since I was fertile, free of disease, carried no known significant genetic abnormalities and had been checked for matching blood type. At that time the American Fertility Society (now the American Society for Reproductive Medicine) had no prohibition against nor opinion regarding this process.

All inseminations were kept strictly confidential. This was the recommended norm at that time. Of course Ancestry.com and 23andMe have recently made such confidentiality impossible.

You have asked for the names of patients that i "substituted (my) sperm as being from an anonymous medical student." I never made such a representation. I am aware, however, of three offspring in addition to [deleted] who were conceived with my sperm, and all contacted me after chromosomal testing revealed that I was their biological father. I have met two and have communicated by email with the third. All three expressed gratitude for their existence and even proudly sent me photographs of their children. I have no objection to providing their names but am concerned about the legality of doing so without their written consent.