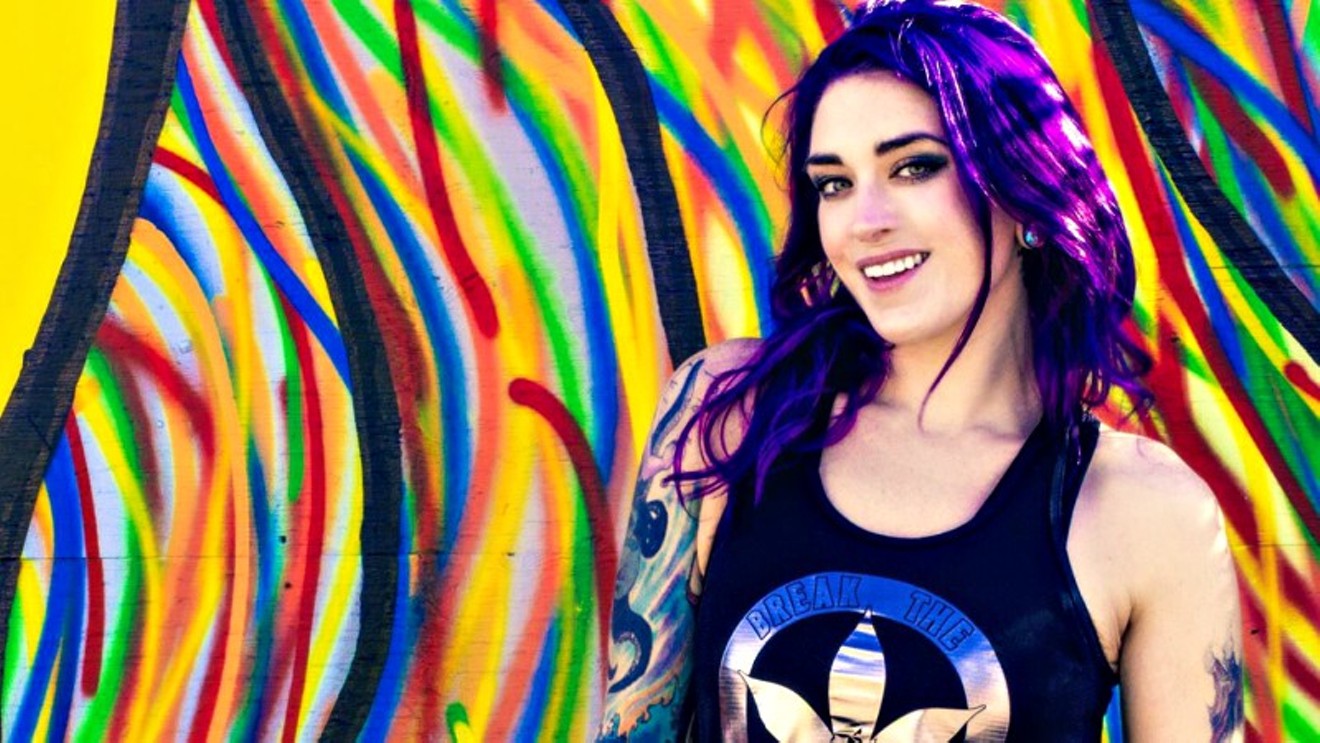 A portrait of Jennessa Lea, aka Fit Cannabis Girl. Facebook
On May 30, about two hours after the publication of our post "Fit Cannabis Girl v. Wheat Ridge's Bid to Shut Down Her Pot-Friendly Gym," a detective knocked on the door of Break the Stigma Fitness and handed owner Jennessa Lea a final order to vacate the premises by June 4. When she spoke to Westword yesterday, mere hours before leaving both the facility and Colorado, she was understandably emotional.

"I'm definitely leaving with a heavy heart," Lea says of the gym, located at 9690 West 38th Avenue in Wheat Ridge. "I know we helped a lot of people, and to see it go is sad. But I'm not just sad for myself. I'm sad that the community doesn't have this as a resource to come together and feel better and learn about things that can truly empower them."

Lea suffers from Ehlers-Danlos syndrome, which she describes as "a disease that affects the elasticity throughout your body where collagen is. I would walk and my patellas [kneecaps] would slip off. All that severe looseness causes a lot of bone-on-bone degeneration, and pain is a big issue. I was sick, obese. I had to use a wheelchair, and I was taking 150 milligrams of Oxycodone and 90 milligrams of morphine just to get through the day."

When Lea's daughter, Raegan, was diagnosed with the syndrome, too, Lea was inspired to make a change, and she developed a regimen combining exercise and cannabis that changed her life, leading her to take on the Fit Cannabis Girl persona and become an online life coach. She subsequently moved to Colorado from her home in Minnesota with the goal of directly sharing what she'd learned with clients at her own fitness center.

Break the Stigma opened its doors in August, and Lea insists that she and a real estate agent working with her had multiple conversations with Wheat Ridge officials telling them exactly what she planned to do — offer two hour "experiences," with the first hour devoted to yoga and other fitness activities and the second hour offering the opportunity to consume cannabis donated by various sponsors. But when the gym was highlighted on a Fox31 broadcast in March, Wheat Ridge representatives suddenly wanted the center to be shuttered.

Jennessa Lea upgrading Break the Stigma gym last year.
Facebook
Wheat Ridge's "Order of Immediate Suspension and Notice of Grounds for Revocation of the Business License" stated that Lea violated city ordinances "by encouraging and permitting patrons to use and consume Marijuana on the licensed premises." Cited were two regulatory subsections, with the first maintaining that "no person may operate a business within the city concerning the sale, use, consumption, manufacture of marijuana unless specifically authorized pursuant to the provisions of this article" and the second stating, "No marijuana clubs may operate or obtain a business license to operate within the city."

In response, Lea asked for an opportunity to state her case and was given the chance to do so at a hearing. But in retrospect, she said, "I feel like they had already made up their minds. It's hard to speculate about exactly what happened, but my gut tells me this had been decided before I even walked in there."

"Last Day in Colorado & Suspension Ruling," the latest post on FitCannabisGirl.com, goes into detail about the rationale offered by Wheat Ridge. But in summarizing the decision, Lea notes that officials determined that "since I did not write on the business license that clients would be allowed to consume cannabis on the private property, I was in violation. The ruling sides with the city's claim they did not know Break the Stigma Fitness was cannabis-friendly."

After Wheat Ridge's edict, Lea began making arrangements to return to Minnesota — and in fact, Raegan, who just celebrated her eleventh birthday, headed there a few days ago. But even though she's optimistic about her return to online life coaching, as well as a proposed tour to help spread the word in person, Lea knows she's going to miss "being able to work with people one-on-one, physically. It was really special to see multiple clients come together and share common interests over illnesses that they have. They could bond and see that they weren't the only person in pain. And the positive results weren't just in their physical life, but in their mental life, too."

Jennessa Lea leading a yoga class at Breaking the Stigma.
Facebook
She added, "The ending of this is a new beginning. It's hard, because I had my whole heart invested into this. But I see where there's going to be so much positivity coming from this situation as well. I'm also a photographer, and Colorado has the most beautiful sunrises and sunsets I've ever seen. I've really been able to hone my photography skills."

In her words, "running a business and raising a child is beyond a full-time job, and I've put my own health and wellness on the back burner. This gives me the opportunity to take some time for myself and document it and share and really connect with people online. Even though I'm not going to have a brick-and-mortar facility, I'm excited to talk to so many people who I know I'll be able to help. I'm truly looking forward to that."

Still, Lea remains unhappy that Wheat Ridge executed what she sees as a 180-degree pivot regarding Break the Stigma Fitness.

Because her cannabis-friendly approach "wasn't written down in that paperwork, they acted like all the conversations I and the realtor had never happened and they had no idea what we were doing," she said. "I can assure you that's not the case. But if this has taught me anything, it's taught me to record any conversations you have with city officials, especially if you're requesting anything regarding a business. You just need to be aware of the checks and balances and keep yourself safe, so you don't get into a situation similar to mine."

Click to read Wheat Ridge's Break the Stigma Fitness license revocation order.
KEEP WESTWORD FREE... Since we started Westword, it has been defined as the free, independent voice of Denver, and we'd like to keep it that way. With local media under siege, it's more important than ever for us to rally support behind funding our local journalism. You can help by participating in our "I Support" program, allowing us to keep offering readers access to our incisive coverage of local news, food and culture with no paywalls.
Make a one-time donation today for as little as $1.