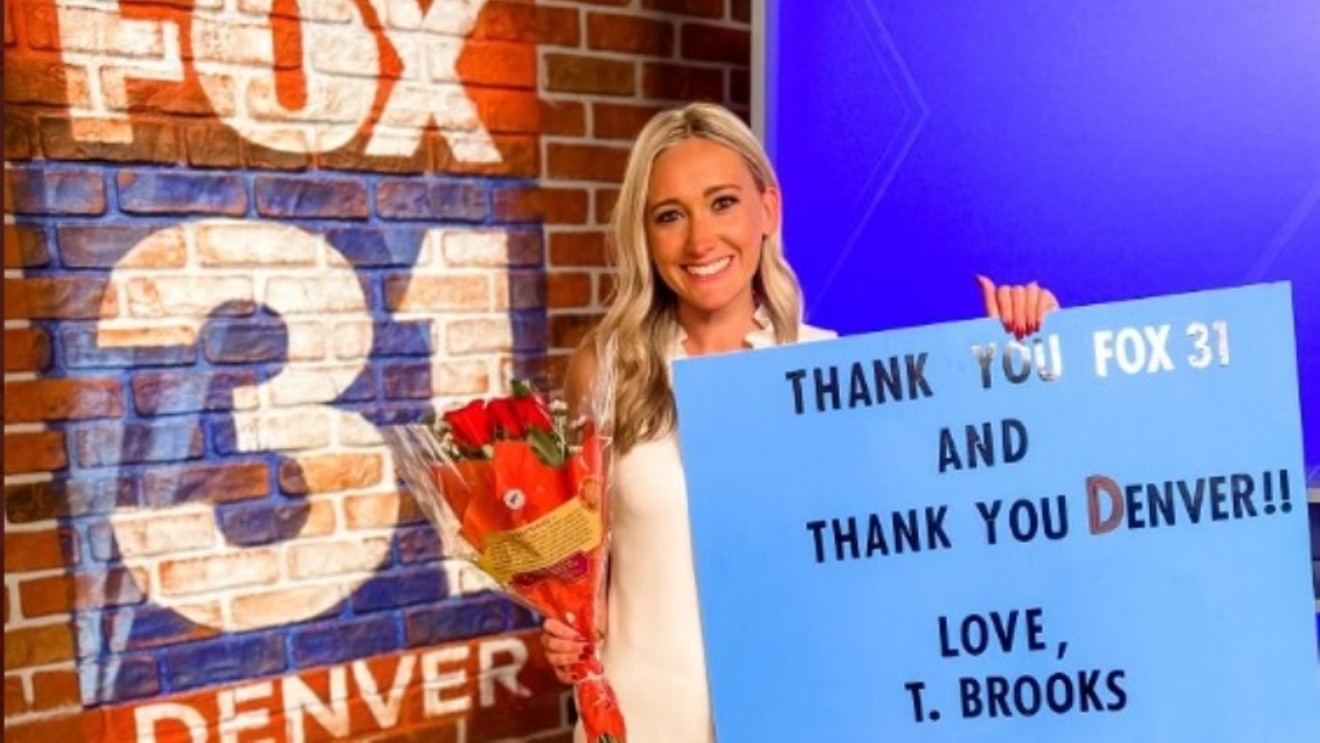 Former Fox31 sports reporter Taylor Brooks tweeted this photo on May 26, her last day at the station. @TaylorBrooksTV
Denver TV stations have long experienced significant turnover, with reporters and anchors typically leaving one outlet in favor of another. But over the past year-plus, the pace of such departures has increased markedly, and many of those moving on have done so not to climb the broadcast-journalism ladder, but to start over in entirely new careers.

This phenomenon is epitomized by the action at affiliated stations Fox31 and KWGN/Channel 2. Since early 2021, Westword has conducted exit interviews with five on-air stars, none of whom chose to split in order to take a gig in another traditional newsroom: Natalie Tysdal, Sam Boik, Matt Makens, Kevin Torres and Michael Konopasek, whose last day was May 23.

However, they represent just under a third of those who've left Fox31 and KWGN/Channel 2 over that time. Also bidding farewell were Brooks Garner, Emily Allen, Aristea Brady, Meghan O'Halloran, Keagan Harsha, Deborah Takahara, Nick Griffith and Rachel Skytta, who plans to spend the next year traveling with her husband and their two dogs, according to a May 24 Fox31 item.

Two days later, on May 26, sports reporter Taylor Brooks had her own final day at Fox31. In a social media post, she wrote: "You've heard it many times before, but us sports people...we love our jobs so much, but sometimes it just doesn't love you back. Local TV is a GRIND, but it has made me who I am today. I've met some of my best friends. Been to three amazing markets. It's time to go somewhere familiar, though...and that's back to Spokane. My fiancé is taking a fulltime job in the Air Force, and he is so incredibly deserving. He's my biggest fan, but it's time to step away from local TV. As far as what's next.... You'll find out soon. For now, I'm going to enjoy some wedding festivities and get ready to become MRS. SCHEIB!"

Brooks's departure brings the total to fourteen, including three last week. Fox31 news director Brian Gregory sees these developments as part of a national trend that extends well beyond the TV news business. "You might have heard about it, post-COVID — some are calling it the 'Great Resignation,'" he notes.

Still, Gregory acknowledges that "our jobs as journalists are tough. And they are not remote. You come to the office to do your work. You get out in the community to report on stories. You cover intense situations, horrific crimes; you’re stuck out in adverse weather conditions for long hours. You work mornings, evenings, overnights, weekends, holidays. So this job can wear on you."

Gregory points out that his fourteen former colleagues all "got out for different reasons. For many, getting out is about family time — the opportunity to spend more time with their loved ones. You have to respect that. For others, it’s about flexibility: the opportunity to work at home. One or two found different jobs, different careers. Brooks [Garner] went to Orlando, Keagan is now a news director in Montana. Meagan is an absolute rock star — working for Sinclair’s national operation in D.C. One [Skytta] is heading out to do some #VanLife. What a great opportunity."

He stresses that "turnover in the TV business is normal. And yes, we’ve seen more of it — not just here, across the country — at TV stations everywhere."

That creates challenges, since "our people are our most important asset," Gregory notes. "We have 140-plus of the most amazing, dedicated journalists and behind-the-scenes staffers in this operation. They do amazing work every day. I admire their hard work and dedication to their community. To break news and to be there to report on even the toughest stories."

Behind-the-scenes folks are hitting the highway, too, including producers. "We are down three or four right now," Gregory says. "They are so important to what we do. And it’s a tough job. They are producing one hour of nonstop news every day, five days a week. It’s intense and stressful. News breaks in seconds. They need to rewrite and rebuild shows. I also readily admit we have to do a better job of investing in our producers — across the industry, not just here. We’re working on plans to do that in the long term. They do such an important job.

In the meantime, though, "We are finding others who want to come join our team and will do amazing things here," Gregory says. "We’ve signed several rock-star producers over the past six months — and they’ve hit the ground running. Joshua Short and Talya Cunningham are rock stars. They’re great on the anchor desk and in the field. Erika Gonzalez does a fabulous job on the anchor desk with Jeremy Hubbard, and both are leaders in the newsroom. We just hired a new morning live reporter and MMJ [multi-media journalist] who are going to do great things. And we’ve rebuilt our sports team with some great journalists. And don’t forget the rest of the team. Lori Jane Gliha and the investigative team’s continued coverage of the use of ketamine by paramedics helped get a law changed. Our digital team was just honored with a regional [Edward R. Murrow award] for their work online. There is a lot of good happening here."

And a lot of new faces.
KEEP WESTWORD FREE... Since we started Westword, it has been defined as the free, independent voice of Denver, and we'd like to keep it that way. With local media under siege, it's more important than ever for us to rally support behind funding our local journalism. You can help by participating in our "I Support" program, allowing us to keep offering readers access to our incisive coverage of local news, food and culture with no paywalls.
Make a one-time donation today for as little as $1.