Kevin Torres on His Decision to Leave Fox31 and TV News 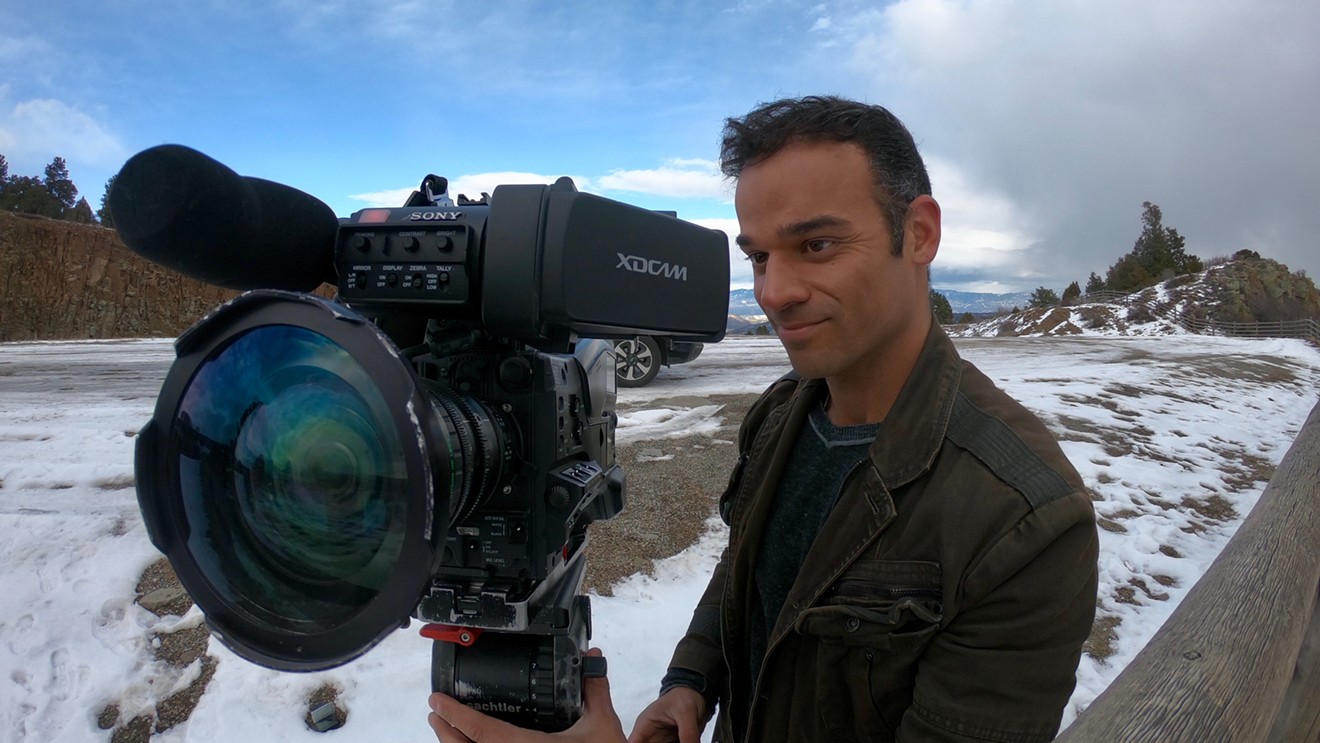 Kevin Torres has shot, written and edited most of his stories over the years. Courtesy of Kevin Torres
Over the decade-plus he's spent at 9News and Fox31, Kevin Torres has become one of Colorado's favorite television journalists, partly because of the personal touch he gives to his stories. Whether he's covering hard news, delivering business reports or shining a light on the sort of small-town tales that are all too frequently overlooked, his empathy and sincerity are evident in every frame — which helps explain why he's been awarded a dozen regional Emmys for his work.

But today, April 1, is officially his last as a TV reporter. He's moving on from the Fox31 morning show to join the communications team for the Denver office of Robert Half Talent Solutions, a national employment agency.

The reasons for the switch coalesced over the two years since the start of the COVID-19 crisis.

"The pandemic gave me the opportunity to sit back and say, 'I'm ready to do something new,'" Torres reveals. "A lot of people experienced burnout — that's true for people in every industry, but maybe a little bit more so in journalism, because we had so much to cover that takes a toll on you mentally. And I really wanted to make my mental health a priority."

Fox31 "has always been really supportive of their employees' mental health, making sure they're being taken care of," he adds. "But I was ready to take things to a whole new level. I wanted to put my personal happiness and my mental health first."

To do so, he's leaving a career that he'd wanted from an early age. "I'm from upstate New York, near the Adirondack Mountains, and I grew up dirt poor. My mother raised my sister and me in a one-bedroom apartment up until I was about twelve years old in a community called Rome. I grew up watching the local news there, and I always wanted to become a journalist — a TV journalist who could go around the community and share good news. I was really focused on good news."

Even before graduating from the State University of New York College at Oswego, Torres gained a foothold in the business, becoming a backpack journalist (someone who shot, wrote, edited and reported his stories) for WWNY-TV in Watertown, New York, while still a college sophomore. He performed the same duties at WSYR-TV in Syracuse for several years before taking the leap to 9News in 2009. Over his five and a half years at the outlet, he collected his first five Emmys, among many other honors. But while he was able to assemble plenty of positive packages as a roaming reporter seeking out upbeat happenings in communities statewide, he also worked grim scenes related to the historic floods of 2013, plus the Aurora theater shooting, an attack on Deer Creek Middle School in Jefferson County and more. Kevin Torres in the newsroom and posing with Elaine Hall, Dylan Redwine's mother, after giving her the Emmy he earned for covering stories related to her son's murder.
Courtesy of Kevin Torres
"I got to see so much good, but I also experienced a lot of bad," Torres acknowledges. "After covering eight mass shootings, I stopped counting."

He also did reports on the 2012 murder of thirteen-year-old Dylan Redwine in La Plata County; Mark Redwine, the boy's father, was ultimately convicted in July 2021. Torres gave the Emmy he earned for his efforts on that subject to Elaine Hall, Dylan's mother, in what's become a tradition: Of his twelve Emmys, he's kept only three, gifting the rest to the subjects of his stories or their loved ones. He also continues to wear a bracelet on his wrist with Dylan's name on it, and plans to do so indefinitely.

In March 2015, Torres made the leap to sister stations KWGN and Fox31. "I started doing GA [general assignment], and they created a feature segment for me where I traveled Colorado. I went to every single part of the state and just about every community to do fun feature stories that showed the spirit of Colorado." He has a particular affection for a 2018 piece about how the town of Craig came together to provide a way for young football fanatic JP Price, whose Duchenne muscular dystrophy requires him to use a wheelchair, to score a touchdown for his middle school.

COVID-19 forced changes in the industry, though. "When the pandemic hit, all of us were locked up at home, and the traveling stopped," Torres remembers. "We weren't going out as much, so my news director, Brian Gregory, created a position he was hoping I'd take on: being the consumer reporter on the Fox31 morning show. And I really embraced that job, which ultimately led to getting the job at Robert Half. I gained all of this knowledge and experience about the employment industry, and I did some stories with them. But I also spent hours every single day during the first months of the pandemic teaching myself new software and new programs, learning how to create and edit graphics and animations. Oftentimes we think to ourselves, 'I'm only good at one thing: What else can I do?' But I was able to expand my skills, and I'm going to be able to use them in my new job." 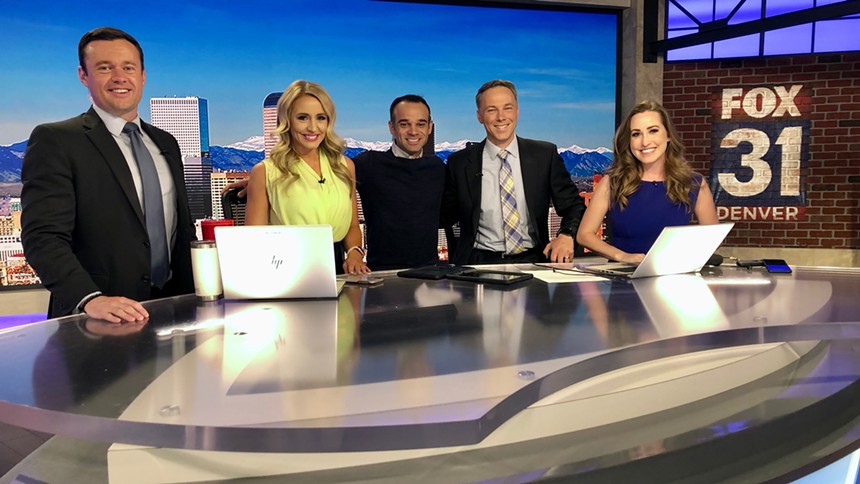 Kevin Torres, center, with the Fox31 morning team.
Courtesy of Kevin Torres
Prior to the the arrival of COVID, Torres had been considering a professional shift, "but as cheesy as it sounds, my passion for local news got reignited," he recalls. "I wanted to stick it out during the worst of the pandemic to help Coloradans get through it. All of us were nervous. We didn't know what would happen, and people were dealing with a lot of anxiety and depression, myself included."

Over the years, Torres established a large presence on social media, with his various platforms achieving a reach of 4.7 million people, and he put that to use during the lockdown. "I was told that coloring really helps to deal with anxiety, so I created a coloring show. Every week, I would go on Facebook Live and color with viewers and talk about life and how everyone was doing." The show — click to watch the Christmas Eve edition — averaged 4,000 viewers per episode. "We really became a community, where we could rely on each other to be there," he says. "We could ask, 'What are you concerned about in Limon?' or 'What are you concerned about in Sterling or Durango?'" He cherishes a postcard he received from a viewer struggling with grief over the death of her son a couple of years earlier. "You gave me something to look forward to and it really helped," she wrote.

The tie Torres feels with viewers remains strong; he reached out to some of them directly to explain his decision to leave Fox31, and he plans to launch a social-media specialty page about caring for plants, another pastime that bloomed during the pandemic, to keep the connection alive.

"I'm going to miss my co-workers a lot," he admits. "They became like family. I think a lot of newsrooms have special bonds, but there's something extra special about the Channel 2 and Fox31 newsroom. When we were on lockdown, Brian Gregory got us together every Saturday to do Zoom workout classes, which kicked our butts, but they were so much fun. It was such a unique experience."

Torres concludes: "I notice that sometimes when people leave the TV industry, they leave jaded or angry or upset for reasons X, Y or Z. But not me. I feel so grateful that I get to leave with nothing but gratitude and good memories."