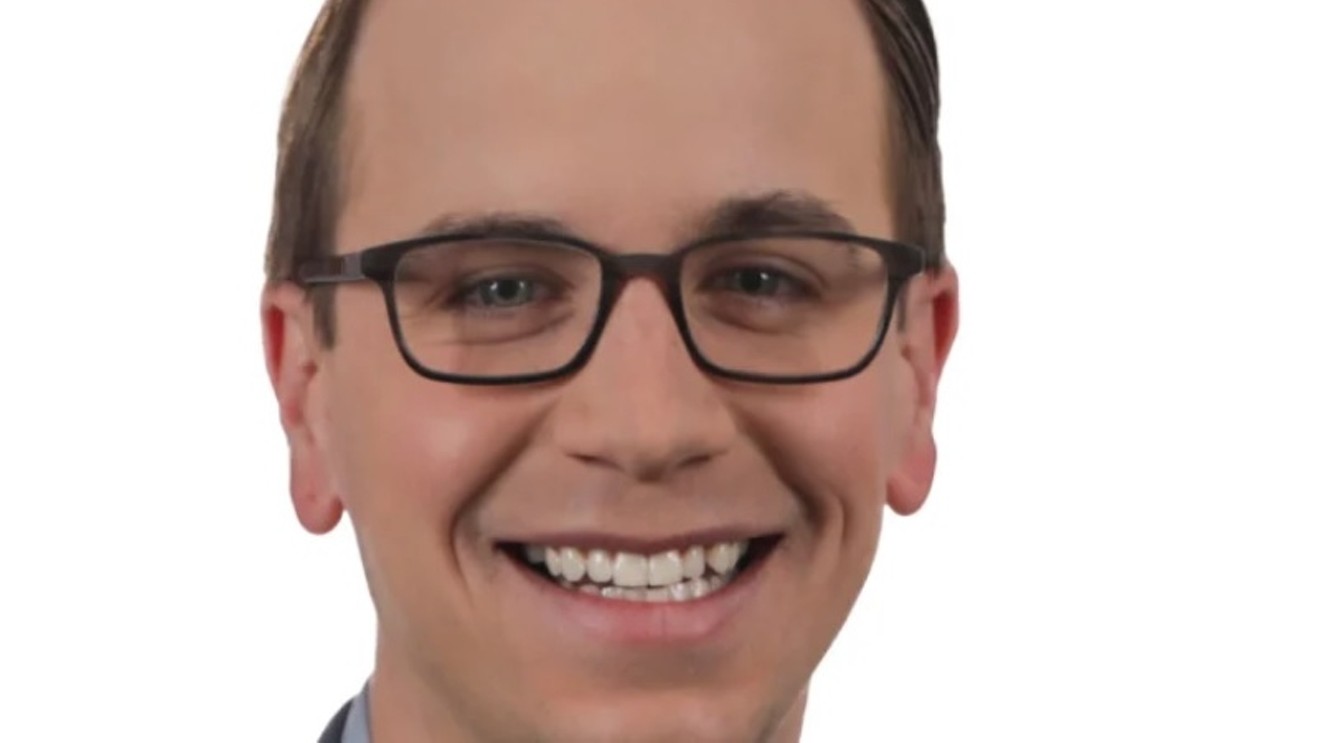 Michael Konopasek has been on the Fox31 staff since 2016. kdvr.com
Another standout Denver television news personality, Fox31 anchor and reporter Michael Konopasek, is leaving broadcast journalism; today, May 23, is his last day on the air at the station. But unlike many of those who've recently exited area outlets in favor of gigs in entirely different professions, Konopasek will still be delivering information — albeit from the other side of the interviewer-interviewee fence. He's been hired as corporate communications manager for Denver-based Frontier Airlines.

"I've always been interested in aviation," says Konopasek, whose duties have included anchoring Sunday morning shows on Fox31 and its sister station, KWGN/Channel 2. "As a reporter, I took the opportunity to do stories on aviation every chance I got. And it's a really exciting time to be with the company."

Indeed, there's a lot going on at Frontier right now. Earlier this year, the carrier announced a merger with another discount airline, Spirit — and while JetBlue is attempting to prevent such a transaction from being finalized through a hostile takeover bid, the main flight attendants' union backed the deal last week, removing a potential impediment to the corporate marriage.

No matter what happens with Spirit, Konopasek is looking forward to embracing a new challenge. But he admits that the transition may feel a little "strange" at times, since "I've spent the last twelve years as comfortable as can be asking other people questions instead of answering them."

Konopasek says he "grew up in the northwest Indiana suburbs of Chicago — Munster, Indiana. And from early on, I remember watching the newscasters in Chicago and thinking, 'That looks like such an awesome job.' My mom has a background in journalism — she majored in it but went into publishing — and I was into theater and speech and debate in high school."

After graduating from the journalism program at Ball State University and completing an internship with Chicago's iconic WLS-TV, Konopasek began climbing the television ladder. Prior to his arrival in Denver in 2016, he worked at KWTV-TV in Oklahoma City and KING-TV in Seattle, and also served as something of a roving correspondent for TEGNA, parent company of 9News.

A collage of Michael Konopasek in action.
Courtesy of Michael Konopasek
Along the way, Konopasek covered two horrific mass shootings — the 2014 attack at Marysville Pilchuck High School near Seattle, in which four people died, and the 2015 assault at Umpqua Community College in Roseburg, Oregon, that killed nine. And his work for Fox31 has hardly been heartbreak-free. Among the most memorable stories on which he's worked were the 2018 fatal shooting of Adams County Deputy Heath Gumm, the 2019 Highlands Ranch STEM school shooting, and the Marshall fire in Boulder County in late 2021, as well as its aftermath. But those stories stick out for Konopasek for reasons beyond the tremendous losses they share. "What I feel most is the resilience we see in communities after tragedy," he says.

And then there was the onslaught of COVID-19, which led to an enormous pivot in the way Konopasek and his colleagues did their work.

"As reporters, we are so used to being together in a newsroom, and also being out in the community," he points out. "So when things closed down in March of 2020, everything just got flipped on its head, so to speak. We started doing our editorial meetings on Zoom — I didn't even know what Zoom was before the pandemic — and I did more interviews on Zoom than in person," he recalls. "Most of America got to know their local TV news reporters' living rooms, because we were sending in our look-lives and sometimes live shots from our homes. I had to put a camera on a tripod in my living room and use my TV as a monitor. Basically, I turned my home into a studio. But it was amazing that we were able to do all of that and still put out a quality product."

These experiences gave Konopasek a new perspective on what he refers to as "the work-life balance," and he's not the only one: He's at least the eighth high-profile Denver television pro to leave TV news since early 2021. The departures include four broadcast journos from Fox31/Channel 2 (Natalie Tysdal, Sam Boik, Matt Makens and Kevin Torres) and three from 9News (Liz Kotalik, Ryan Haarer and Becky Ditchfield).

Konopasek has nothing but positive things to say about his stint at Fox31, and broadcasting in general. "I'll miss meeting different people from different walks of life every single day, and all of my co-workers over these last six years and throughout my entire TV journey," he admits. "But I'm looking forward to moving on to the next stage."
KEEP WESTWORD FREE... Since we started Westword, it has been defined as the free, independent voice of Denver, and we'd like to keep it that way. With local media under siege, it's more important than ever for us to rally support behind funding our local journalism. You can help by participating in our "I Support" program, allowing us to keep offering readers access to our incisive coverage of local news, food and culture with no paywalls.
Make a one-time donation today for as little as $1.