Brit Hoagland on Freeing FoCo's Nipples, Why City's Still Fighting to Hide Them 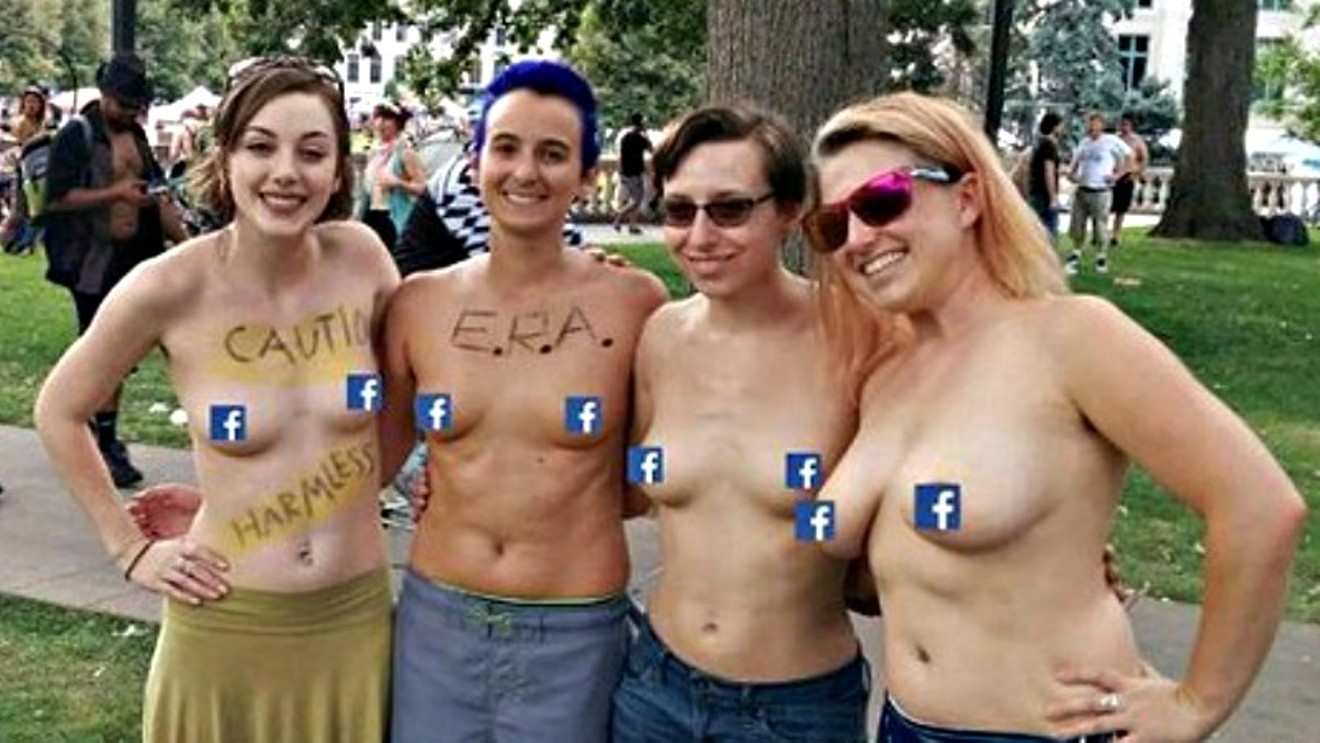 Brit Hoagland, second from left, joins others showing their support for the Free the Nipple movement in a Facebook-friendly photo. Facebook
The 2017 edition of Denver Go Topless Day is scheduled for August 26, one month from today. But in the run-up to that event, nearby Fort Collins continues to fight a temporary restraining order issued earlier this year against the enforcement of a public-indecency ordinance that includes the words "the breast or breasts of a female," despite a statement from the ruling judge that he would likely rule against the community on constitutional grounds. This stance exasperates co-plaintiff Brit Hoagland, who continues to follow the case even after leaving FoCo — and the regular criticism from residents and officials opposed to topless equality.

Hoagland is referring to Fort Collins councilperson and former mayor Ray Martinez, who, during an October 20, 2015, hearing, publicly agonized over the possibility that children under age eighteen might spy a breast live and in person, given that local laws keep "pornographic" magazines such as Playboy out of view at convenience stores. It's only one of the bizarre incidents that Hoagland has experienced since the campaign against the ordinance got under way more than two years ago.

"I became interested in the issue because I wanted to dip my toes into politics," Hoagland notes. "I had just graduated from CSU in human development and family studies, and I had thoroughly researched this topic: how families and children are affected by sexist rules, basically. I thought this would be a very simple issue to take on with the city," since Fort Collins could defer to state law, which makes no reference to gender.

The first official whom Hoagland contacted was councilmember Gerry Horak, "who was up for re-election — and he said, 'I totally understand why our current ordinance is sexist. Vote for me.' So I did. But many months later, he hadn't done anything about this. So I became a squeaky wheel. I started doing interviews with other city council members, and I got the distinct feeling from them that it would be better if I shut up — that they didn't want to deal with this."

The issue began to get more traction after an article by the Fort Collins Coloradoan on the topic. After that, the city council launched a public survey. "It was very interesting how that ended up," Hoagland says. "Going through the e-mail archives, we were in the lead, but after Martinez contacted an outreach pastor through his government e-mail, we went from being a third ahead to a third behind." 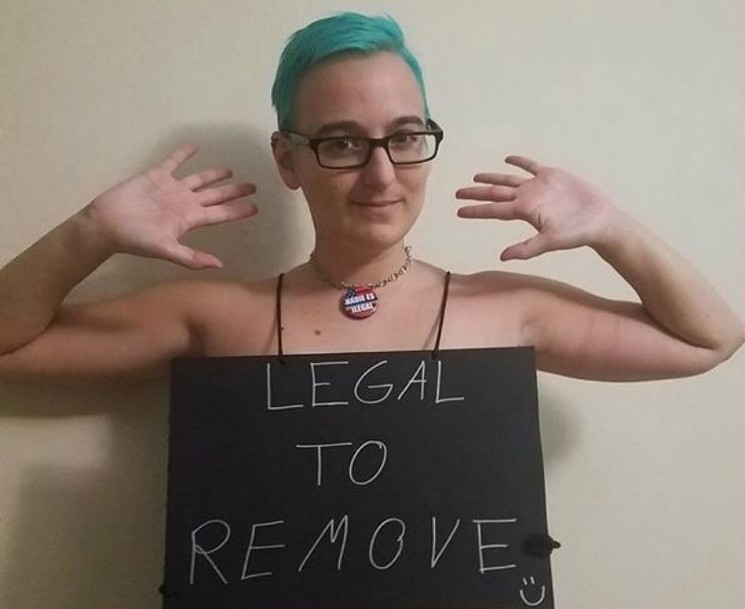 Brit Hoagland shared this photo of a court ruling against the Fort Collins ordinance earlier this year.
Facebook
The ordinance language that emerged from this process is reproduced below in its entirety. And while officials portrayed it as offering compromises, such as explicitly protecting breastfeeding women "in places they are legally entitled to be," Hoagland found the results to be "long and convoluted. Look at the exceptions for emergency services — how you can take off a person's shirt if you have to resuscitate them, as if you would raise charges against someone whose life you're trying to save. It went from one sentence to two or three paragraphs."

Also precluded from prosecution were girls under age ten, a cut-off Hoagland finds arbitrary and offensive. "For all this talk about protecting the children, there was a clear slant against giving all children rights, and that's not okay with me. I am a child-abuse survivor. Bodily autonomy was robbed from me all my life. To think of that happening on a citywide scale was too much for me. I don't want any child to feel the way I did."

Overall, "it was really revolting, honestly, to see how far the city was willing to go, even though I brought up to them that this violated the state constitution over and over again," Hoagland maintains. "And lo and behold, the judge agreed with me."

That process took a while, though. In the spring of 2016, Hoagland and co-plaintiff Samantha Six sued Fort Collins over the ordinance, and that October, Judge R. Brooke Jackson rejected FoCo's request to dismiss the case, allowing it to move forward on two of three claims. At the time, David Lane, the attorney who represented Hoagland and Six, told us, "The handwriting is on the wall. When the judge says, 'This statute is unconstitutional,' for whatever reason, that means this fight is basically over."

So it seemed this past February, when Jackson issued an injunction against Fort Collins on constitutional grounds. But while this ruling appeared to kill the ordinance, Fort Collins decided to appeal — a process that may prove extremely expensive. Lane estimates that the city could pony up as much as $250,000 on an effort he regards as doomed.

In some ways, Hoagland feels responsible for this expenditure. "I'd be lying if I said I don't feel guilty when I think how that money could help people in Fort Collins rather being spent to protect people from wild nipples. In the end, I know it was Fort Collins's choice not to listen to me in the first place, and their choice to appeal — and the consequences are what they are. But I know there's a homeless population in Fort Collins that could really use that money, and it's frustrating to know they won't get it." 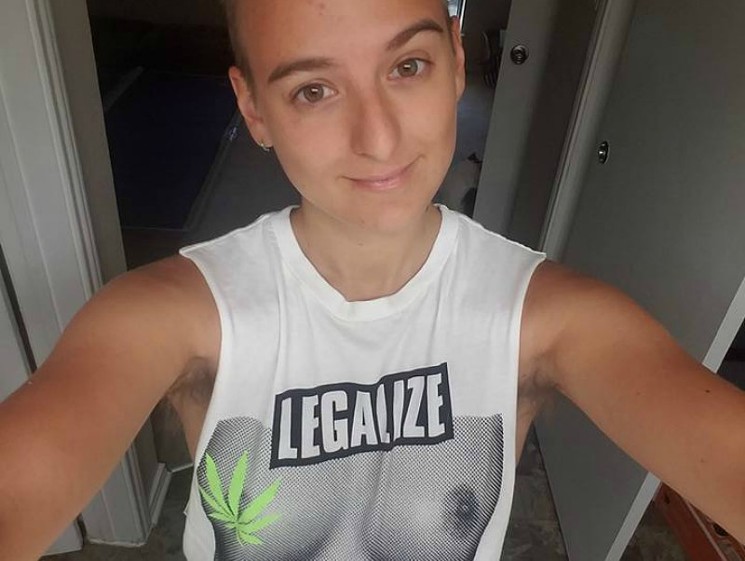 A Facebook self-portrait of Brit Hoagland.
Facebook
Although the court challenge has been embraced by the wider Free the Nipple movement, Hoagland expresses problems with how the organization is promoted in a statement sent via e-mail. It reads: "The erasure of unprofitable chests is too common. As in the FTN movement is represented by young, cis [a.k.a., a person who identifies with one's sex at birth], abled white women with perky and large chests. That beauty standard is not revolutionary; their bodies are already on billboards in lacy bras and bikinis. So us activists must ask, how exclusionary is this right that belongs to ALL people? I'm talking people who are fat, disabled, tattooed and scarred, people of color, trans and nonbinary folks. Why is our representation so limited and patriarchal? How do we make this more accessible for them? And the answers are scary for privileged people."

Even so, Hoagland is dedicated to seeing the case through to its conclusion: "I think the reason this is so important to me is because people's bodies should be their own."

(a) No person who is ten (10) years of age or older shall intentionally expose any portion of his or her genitals or buttocks while that person is located:

(2) On private property if the person is in a place that can be viewed from the ground level by another who is located on public property and who does not take extraordinary steps, such as climbing a ladder or peering over a screening fence, in order to achieve a point of vantage.

(3) As used in this Section, public place shall mean a place to which the public or a substantial number of the public has access, and includes but it not limited to highways including sidewalks, transportation facilities, school, places of amusement, parks, playgrounds and the common areas of public and private buildings and facilities, and shall not include any theater, concert hall, museum, school or similar establishment to the extent the same is serving as a performance venue.

(b) No female who is ten (10) years of age or older shall knowingly appear in any public place with her breast exposed below the top of the areola and nipple while located:

(2) On private property if the person is in a place that can be viewed from the ground level by another who is located on public property and who does not take extraordinary steps, such as climbing a ladder or peering over a screening fence, in order to achieve a point of vantage.

(3) Public place in this Section shall be defined as in Section (a)(3) above.

(c) The prohibition in subsection (a) does not extend to:

(2) Persons located in dressing rooms, shower rooms, bathrooms, or in other enclosed areas specifically designated for changing clothes or in which nudity is explicitly permitted; or

(d) The prohibition in subsection (b) does not extend to women breastfeeding in places they are legally entitled to be.