Frontier Airline's Next Strike Threat Is From Flight Attendants 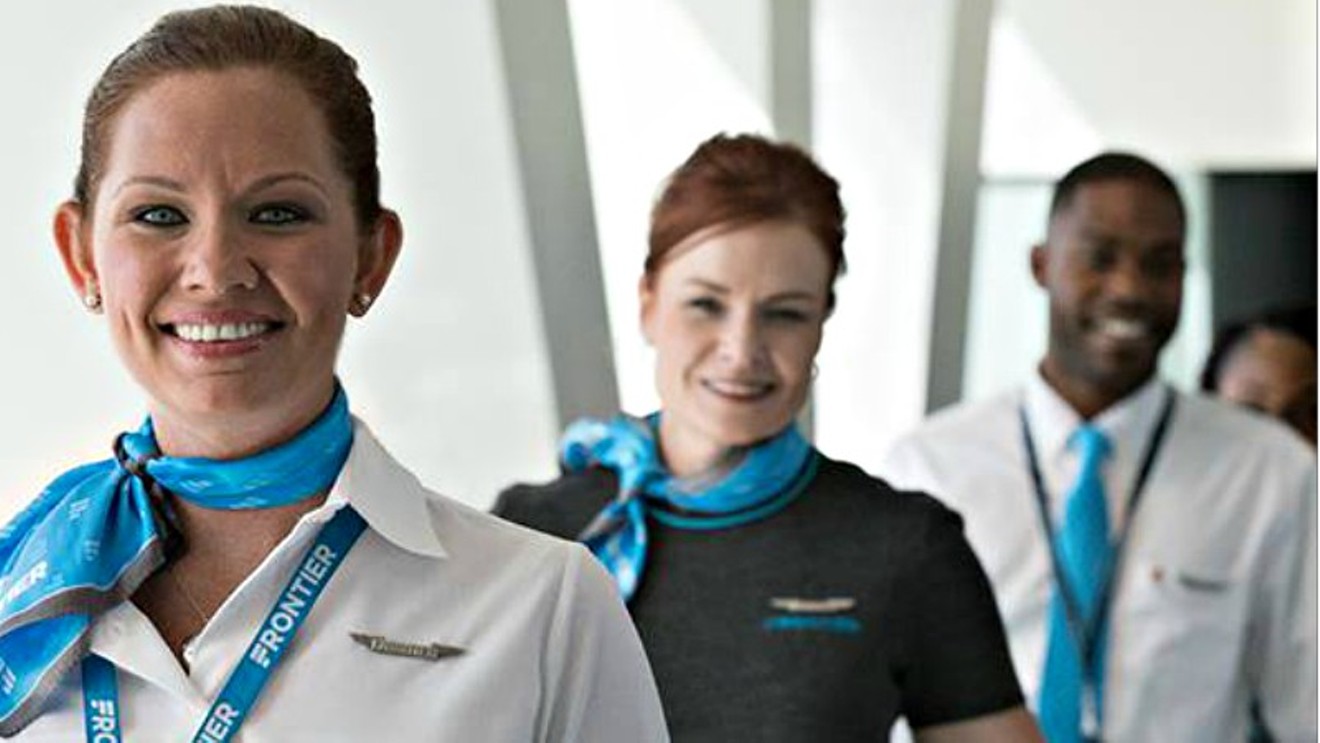 The text accompanying this photo on a Frontier Airlines Facebook post from June announced: "We’re hiring 100+ Flight Attendants for our Chicago, Denver, Las Vegas, Orlando, Philadelphia and Trenton bases!" Facebook
After years of bad blood, Denver-based Frontier Airlines and its pilots finally appear to be on the cusp of a new contract, with members scheduled to vote on the pact on January 10. But other employee groups at Frontier are also disgruntled, including flight attendants, whose union has authorized a strike.

A walkout can't happen immediately, acknowledges Taylor Garland, a spokeswoman for the Association of Flight Attendants-CWA, which represents such workers at Frontier and nineteen other U.S. carriers.

Under the federal Railway Labor Act, which governs the airline industry, "the rules are a bit different," she says. "Employees have to be released by the National Mediation Board. When they do, there's a thirty-day cooling-off period before a strike can begin — and we're not at that point yet. The board hasn't released the flight attendants to strike yet, but they've clearly demonstrated that should the board do so, they are willing and ready to strike."

Garland adds that "AFA runs a different kind of strike. We call it 'chaos,' where we create havoc around the system. It's not that every single flight attendant walks off the line. The union picks and chooses how and when they walk off. We might choose to strike every flight leaving Denver or a specific type of plane or destination, or maybe jut one flight. It's a strong strike method, because it gives us the ability to keep it going for a long period of time. It requires the least amount of flight attendants to walk off the job with the maximum impact. When it happens, we've seen passengers booking away from the airline immediately."

As for the main issues raised by flight attendants, they involve pay and benefits. 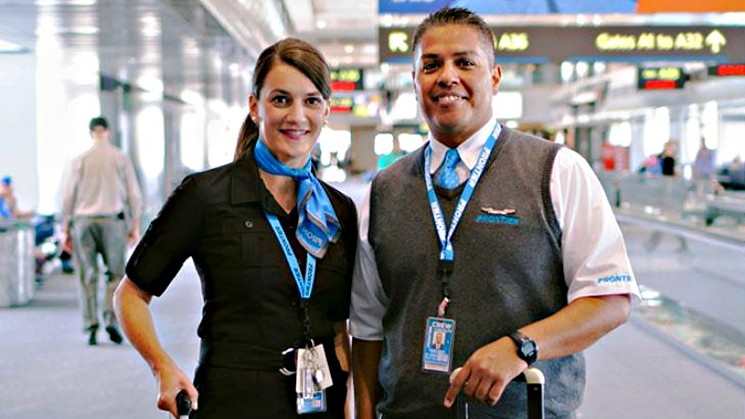 A photo from a page from Frontier's website dedicated to recruiting flight attendants.
flyfrontier.com
"After our recent contract with Allegiant Airlines, Frontier now has the lowest pay for flight attendants of any major carrier in the U.S.," Garland maintains. "And health care is obviously very important, too. We negotiated a new health-care agreement with Spirit, and Spirit now has some of the best health care in the industry. A lot of people put Spirit and Frontier in the same category," as low-cost airlines, "but Frontier lags behind in that respect."

Moreover, Garland continues, Frontier's "scheduling provisions and work rules are definitely well below the industry standard. It's not a benefit a lot of people think about, but the airline industry is a 24-7/365 operation, and that affects flight attendants. Things happen, but they need to be adequately compensated when their lives are interrupted."

General working conditions are also a factor, as exemplified by a 2017 federal complaint submitted to the Equal Employment Opportunity Commission by the ACLU of Colorado and the law firm Howell Shuster & Goldberg LLP on behalf of two Frontier flight attendants. The filings' "statement of harm" maintains that the plaintiffs were forced to take unpaid leave in order to have their babies. And upon their return, their situation didn't improve much, in part because they maintain that Frontier forbade them from pumping breast milk while on duty — an edict that could be downright painful, given that their shifts on back-to-back flights often lasted ten hours or more.

Garland declines to talk specifically about the complaint. But she does say that matters concerning breastfeeding "are an issue across the industry, and a provision in the recent FAA reauthorization bill requires some nursing stations at airports. That's not necessarily specific to crew members, but it's a step in the right direction — a place for passengers or crew members to nurse or pump. There's a period of implementation, but what we legislate, we don't have to negotiate. So we're working on this from all angles."

Negotiations between Frontier and the flight attendants have been going on, and going nowhere, for two years, Garland points out, and she sees the strike announcement as a way of convincing the company to get serious.

"We're extremely happy the pilots have reached a temporary agreement," she stresses. "But now we need to put in the work to pressure Frontier management to come to the table for us. And that's what we're going to continue to do."
KEEP WESTWORD FREE... Since we started Westword, it has been defined as the free, independent voice of Denver, and we'd like to keep it that way. With local media under siege, it's more important than ever for us to rally support behind funding our local journalism. You can help by participating in our "I Support" program, allowing us to keep offering readers access to our incisive coverage of local news, food and culture with no paywalls.
Make a one-time donation today for as little as $1.