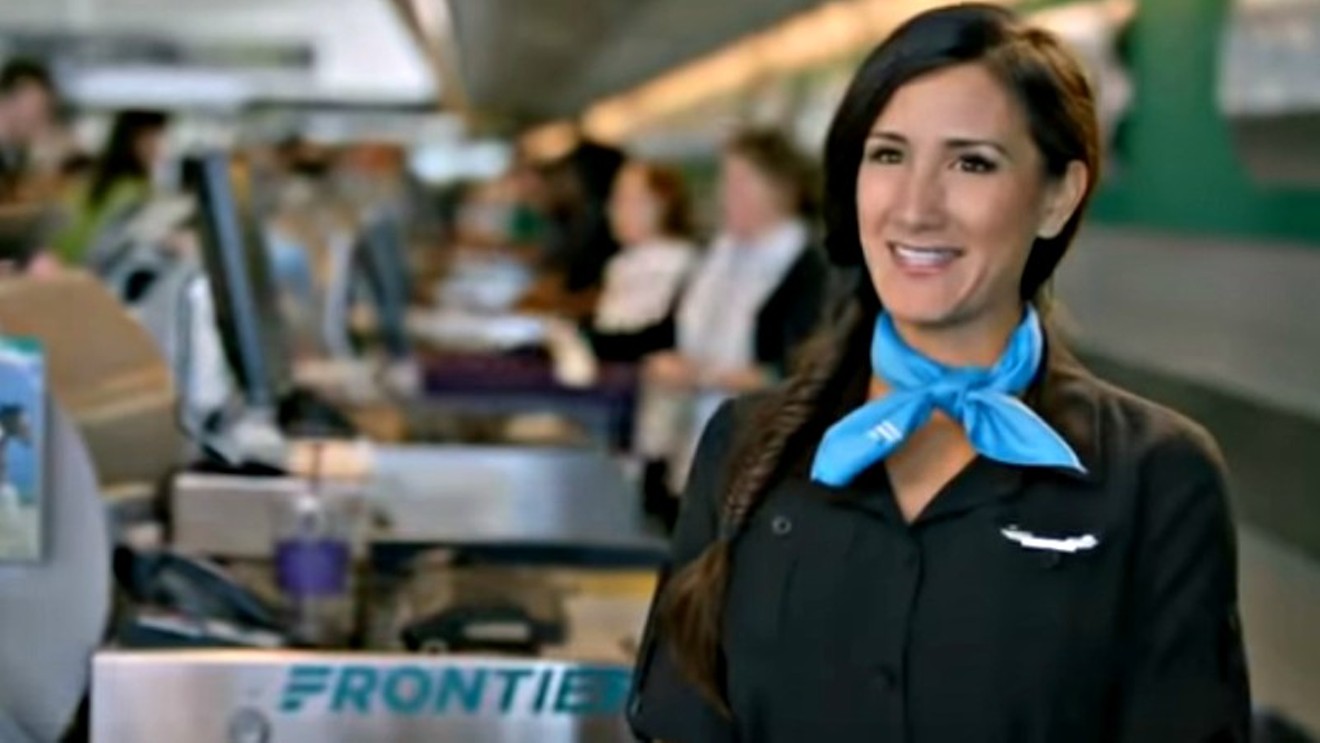 Frontier flight attendants have been in contract limbo for three years. YouTube
Shortly after Frontier finished tenth out of ten airlines analyzed in a devastating quality report, Denver's hometown carrier agreed to terms in contract negotiations with the Association of Flight Attendants-CWA. The union represents around 2,200 Frontier flight attendants, who'd voted late last year to authorize a strike.

AFA-CWA spokeswoman Taylor Garland doesn't think the new study, issued by The Points Guy, was a major factor in Frontier's finally moving late on March 19 to resolve a labor dispute that echoed one involving its pilots, who'd authorized a new contract in January following a decade of beef; she believes a looming public rally by flight attendants, which had been scheduled for March 20 at Civic Center Park, was a larger factor. But she says that the proposed pact, which still needs the approval of union leaders and members, will go a long way toward addressing worker satisfaction issues that have been allowed to linger.

"When flight attendants and pilots and any employees feel valued and have a contract that recognizes their contributions, that will drastically improve their quality of life anywhere they are, whether that's at work or at home," Garland says. "Then you can focus on other things, because you've got the financial and quality-of-life issues settled."

The flight attendants' contract ran until March 2016, but because of regulations associated with the federal Railway Labor Act, it didn't officially expire. Instead, Garland explains, "it became amendable" — and she argues that significant changes needed to be made, since the previous pact had been signed during what she calls "the bankruptcy period," when employees made significant concessions to keep the company flying.

Since then, Frontier has became a profitable enterprise, and flight attendants felt that their pay and compensation should reflect this change in status. Hence the 2018 strike authorization vote and other efforts to shine a light on the situation.

"We did a bunch of picketing at bases around the country last summer," she points out, "and we did a big demonstration outside company headquarters in January. It was during a huge snowstorm, but there were about a hundred flight attendants there."

A screen capture from a November 2018 video celebrating Frontier's funniest flight attendant.
YouTube
Amid such efforts, talks between the carrier and the union made what Garland characterizes as "incremental progress" over the past three to four months, smoothing over conflicts on an estimated 70 percent of the major issues. But that still left a significant gap, which the AFA sought to narrow in Denver.

"We brought our board of directors here, and we had scheduled the rally," Garland says. "And I think the pressure of having 200-plus flight attendants not just from Frontier but from other airlines across the country played a big part in our negotiating team being able to push through a deal."

The next step is a ratification vote by Frontier union leadership on March 28. If the contract gets a thumbs-up then, the membership as a whole will weigh in over the next month or so.

Although Garland declines to get into the specifics of the agreement's language, she stresses that "it includes significant pay increases and improved schedule flexibility and protection, which is very important to flight attendants. If there are issues within the operation, there's more flexibility for them and some incentive for the company to get them back to base — and if not, Frontier will bear financial costs. There's also protection for reserves, improved rules for new hires, better vacation time and quality-of-work life enhancements, along with other benefits."

The contract will finally bring the flight attendants' contract up to industry standards, Garland adds.

In the meantime, Scott Mayerowitz, executive editorial director for The Points Guy, and the author of the recently released airline quality report, says that the dissatisfaction of Frontier pilots and flight attendants likely contributed to dragging down the airline's reputation. In his words, "Unhappy cabin crews may have boosted the number of complaints passengers filed against Frontier with the Department of Transportation."

Metropolitan University of Denver's Jeffrey Price, a professor in the Department of Aviation and Aerospace Science, goes further. Speaking about Frontier employers, he says: "What I see is people being professional on their face and doing what they need to do for the job. But behind the scenes, they're going, 'I can't believe what they're doing to us.'"

Garland's take? "Frontier has gone through a significant period of labor unrest coming out of its sales and its bankruptcy," she stresses. "They've also outsourced a lot of things that would help or contribute to airline quality. Ultimately, this is a people business, and flight attendants are the ones that are delivering the product. When they don't feel they're being valued or they have to work a second job because their wages are so poor, that can have an effect."

When asked via email for comment about the pending agreement, Frontier director of corporate communications Jonathan Freed declined comment "out of respect for the process."

This post has been updated to include a response from Frontier spokesperson Jonathan Freed.
KEEP WESTWORD FREE... Since we started Westword, it has been defined as the free, independent voice of Denver, and we'd like to keep it that way. With local media under siege, it's more important than ever for us to rally support behind funding our local journalism. You can help by participating in our "I Support" program, allowing us to keep offering readers access to our incisive coverage of local news, food and culture with no paywalls.
Make a one-time donation today for as little as $1.