Survey: 48 Percent of Marijuana Users Have Gone to Work High

Getty Images
Update below: A new survey maintains that nearly half of all marijuana users in legal cannabis states such as Colorado have gone to work high, and of those who've done so, 39 percent of them are stoned on the job at least once a week. But the unscientific poll can hardly be seen as the definitive word on a subject that's stirred controversy here for years.

After the approval of Amendment 64, the 2012 measure that legalized limited recreational marijuana sales in the state, plenty of folks in the business community hit the panic button. Note our post-election interview with Jeffrey Popiel, president and CEO of Denver-based Geotech, who predicted that legal pot would make it hard to hire and devastate the economy.

Cut to January 2014, after Amendment 64 went into effect, when a wider variety of views were on display. For a post offering tips about applying for a job in Colorado, Andrew Hudson, the namesake of Andrew Hudson's Job List, shared this anecdote: "The first month marijuana was legalized, we got a job posting from Larimer County that said in big, bold letters, 'WE ADHERE TO FEDERAL DRUG RULES AND FEDERAL DRUG TESTING.' Then, about twenty minutes later, we got a job posting from an architectural firm in Telluride, and it had big letters that said, 'DID YOU KNOW MARIJUANA IS LEGAL IN COLORADO?' So you had a government agency warning people about it and this other business using it as an incentive."

Today, Colorado's economy is among the hottest in the nation, regardless of legal weed's presence, yet there remain plenty of vocal opponents to the state's cannabis policy. Included among them is the Rocky Mountain High Intensity Drug Trafficking Area, a federally funded law enforcement group that puts out regular reports suggesting that Colorado is going to hell thanks to marijuana.

Such organizations will likely be cheered by two recent reports by Instamotor, a used-car app that has branched out into statistical analysis. Last October, the company published a survey in which 39 percent of marijuana-using respondents said they feel comfortable driving within two hours of smoking pot — just under the 42 percent who had the opposite point of view. The remaining 19 percent maintained that their opinions varied based on the circumstances. 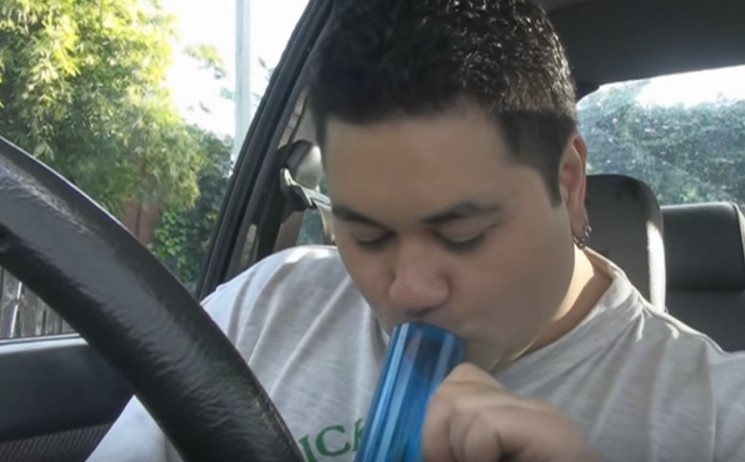 Instamotor's latest survey follows one about stoned driving.
YouTube file photo
While the 39 percent figure may seem high, it's actually lower than the digits gathered by the Colorado Department of Transportation in 2016 on a similar subject. According to CDOT, 55 percent of those quizzed by the department felt it was safe to drive after smoking marijuana. But like the Instamotor report, the CDOT survey wasn't scientific in nature.

The same can be said of the newest Instamotor salvo, conducted on January 25, 2017, using a platform called Pollfish. The survey was conducted on January 25, 2017, in states where recreational marijuana is legal. Of the 600 marijuana users who took part, 48 percent of them said they have gone to work high. Within that portion of the survey group, 39 percent said they did so at least once per week, 17 percent at least once per month and 28 percent several times per year, leaving 18 percent who insisted that the last time they were less than sober while working happened more than twelve months before.

Additionally, the survey found that 50 percent of the on-the-job marijuana users feared that they'd be fired if they were caught, even though 73 percent believed they performed their tasks better when high. And 74 percent of the pot consumers admitted to having gone to work buzzed even before marijuana was legalized.

Contrary to popular belief, not every Coloradan smokes pot. According to a survey cited in a 2016 report by the Colorado Department of Public Health and Environment, approximately 13 percent of Colorado adults age eighteen and up said they'd used marijuana in the previous month. Another study cited in the document put that number closer to 17 percent.

Nonetheless, if the Instamotor stats are on the mark, there's a better than decent chance that the person in the cubicle to your right will come to the office over the next few days after waking and baking. But odds are even higher that marijuana critics will use the claim to argue that the sky is falling without worrying about the survey's accuracy.

Courtesy of Justin Strekal
Update: After the publication of this post, we were contacted by Justin Strekal, political director for the National Organization for the Reform of Marijuana Laws (NORML), with whom we've spoken about a range of issues.

Most recently, he weighed in on Attorney General Jeff Sessions's decision earlier this month to rescind the so-called Cole memo, an Obama-era Department of Justice document that provided some legal protections for businesses operating in states that allow and regulate cannabis sales, has shaken the marijuana industry in Colorado and beyond.

Strekal thought one way of demonstrating that Instamotor's statistics shouldn't be interpreted as suggesting that everyone in Colorado is showing up to work blazed would be a graphic showing that each figure represents a smaller and smaller portion of the whole.

The sketch above, kindly sent by Strekal, makes this point in simple and straight-forward fashion.